One of the highlights of a challenging year last year was to attend the Red Carpet Premier of Thor: The Dark World. Since seeing this awesome movie, I have been waiting for the announcement that the DVD would be coming out. Well, the time is here! On February 4, 2014, Thor: The Dark World was released on 3D and HD Digital. Full 3D Combo Packs will be released February 25, 2014. 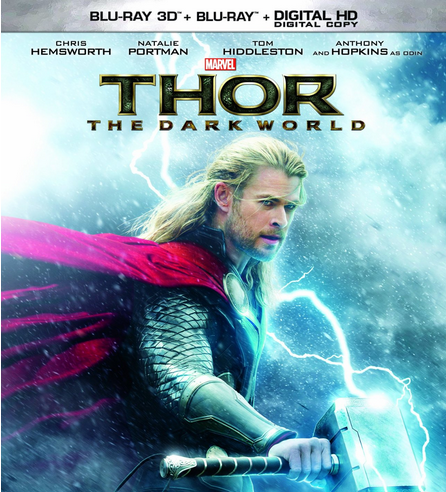 The cast of Thor: The Dark World including Chris Hemsworth, Natalie Portman, Tom Hiddleston and Jaimie Alexander lay down solid performances that will last in your memory as the saga of Thor continues.

In The Dark World, The Mighty Avenger battles to save Earth and the Nine Realms from a shadowy enemy. Odin and Asgard fight to keep the universe from plunging back into darkness. This high powered, highly energized film has you glued to your seat from start to finish.

I loved this movie. In the true tradition of The Avengers and Thor, the characters drive the story line guiding you on the journey accompanied by laughter and heartfelt emotion. I am not a huge action movie person and this one had me hooked and wanting to get the DVD!

One of my favorite things I get out of the DVD’s versus the theater is the Bonus Features! Thor: The Dark World if full of them!

There are never before seen deleted and extended scenes, a gag reel that had me laughing, an exclusive look at Marvel’s Captain America: The Winter Soldier. There is also commentary from the directors and so, so much more. I liked the 30 minute featurette of A Brother’s Journey: Thor & Loki as well.

There are so many awesome things about the Combo pack coming out that any Marvel fan would love it! Be sure to PREORDER now to have yours delivered on February 25, 2014!