This Online Dating Scam Took Any Trust I Had Left

This Online Dating Scam Took Any Trust I Had Left

It has taken me a while to write this post as the shame of almost falling for this has barely subsided. I am an educated, careful, private with my personal information woman. I protect my children and myself at all costs. So online dating has been one of those things that is very off and on and more off than on. I get onto a ‘reputable’ site for about a week, find that I am more insulted and degraded than interested in and then get off, more dedicated to being alone for a while than before I tried. But I have always thought I was so smart about it. I have an email address I use that does not even have my real name and a phone number through google that can not be traced to me. Photos are obscure and personal information is very guarded. So when this long, elaborate attempt at a scam happened to me, I was totally floored. A while later, I admit that I still am. This Online Dating Scam Took Any Trust I Had Left. It will be a very, very long time before I get it back. 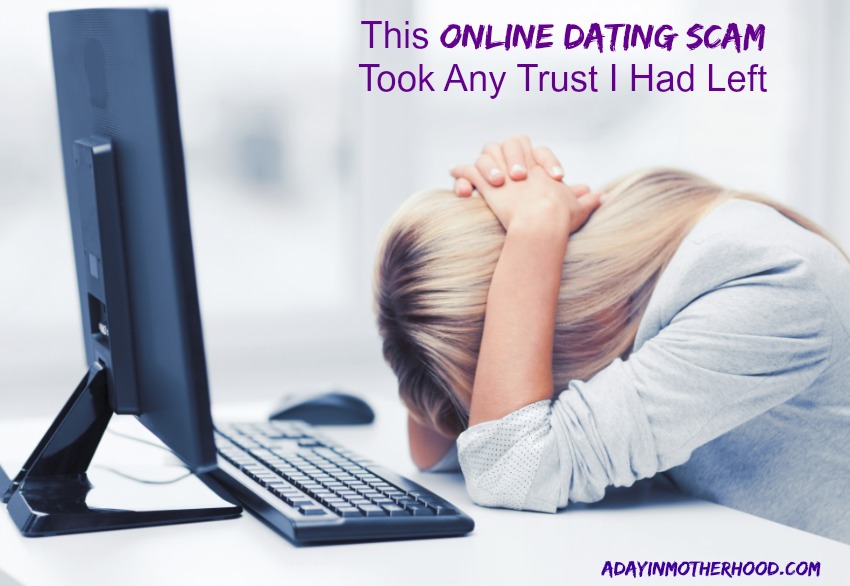 It started when I signed up for a free site, daring myself to ignore the emails that are insulting and leading, letting my guard down just a little in hopes of finding a companion that might be more one day. My profile was very clear. Single woman seeks single man – not married, not involved, not keeping a side girl hanging on in case something else does not work out , not separated but still living with his ex while he ‘figures things out’ single.  But ‘single’ single and wanting to meet someone for a low pressure friendship that could be more one day. Dog lover, in shape, passionate about life, travel and all things fun! No pressure, no expectations, no preconceived notions going in. Pretty clear, right?

I thought so. But the onslaught of ‘can you meet me at a hotel in an hour’ and ‘can you send me a full nude photo’ and ‘are you interested in an affair’ messages came flooding in. One after another, non stop, messages that no normal human should ever be sending out to a stranger online. Like… never. Nor should any woman on this planet be subjected to them as they are degrading, insulting and just… bad.

Among the messages that made my stomach turn was a ‘Hi, how are you?’ message. Thinking that maybe, just MAYBE there are still men on this planet who are normal, I clicked the profile. Staring back at me were the most incredible blue eyes I have ever seen. I admit, my heart jumped a bit. Such a rarity for me that I decided that a response was needed.

I messaged back, bracing for the ‘send me a shot of your boobs’ response and logged off the site. Presumable to shower the ick of the other messages off. Days later, bravado back on, I logged in again. Among the typical messages was a response from blue eyes. A normal response. ‘I am well. How are you?’

And so it went for about a week, which is as long as I could stomach the site, and I canceled my account. Before doing so, though, I send blue eyes a message with my incognito email address and told him to feel free to reach out.

He did. For a week or so we emailed and then I gave him my untraceable phone number. He seemed so…. real…

His story was that he lived in a suburb of Houston, drove a Ford Explorer and Mercedes, was a Civil Engineer currently in Norway on a rig, coming back to town in 4 -5 weeks. He was looking for a long term relationship, ready to date again after spending years recovering from his ex’s treatment of him. He talked about his daughter, her ballet classes and piano lessons, was fine with me sharing nothing about my kids, told me about his dad that passed when he was young, his mom crushed by the death, moving him back to Poland, where he was born, raising him as a single mom. The details, the instant answers to questions and the fact that in the three weeks we talked, daily, all day long, he never once asked about sex or for anything inappropriate made me think this could be real. I won’t lie.

He sent photo after photo of himself, talked about his travels, his dual citizenship and even called me several times from the rig. Though the calls were hard to hear, because he was on a rig and all, right?, he seemed to have a polish accent and I liked getting them. I searched on Facebook, google and any other site I could find and did find someone that seemed legitimately to be him on the Warsaw University site where he said he attended.

Not everyone is on social media or has an internet trail, especially not a 50 year old man, so I was not totally surprised not to find more.  I even used an app on my phone to see if any of the photos he sent me were already online as someone else. They came up clean.

He was perfect. Fine with my boundaries, educated, well off, seemingly open minded, no pressure, no expectations, no preconceived notions. It was a blooming friendship I never hoped I could have. I was happy, talking to friends about him, voicing doubts that they silenced with logic, dancing around with hope that it could, finally, be my time for a monogamous, adult, honest relationship.

And then came the text. The one that shattered me. Took my trust and any ounce of respect I had for myself left and smashed them to the floor, leaving only pieces of the innocence of hope that will never be able to be mended.

It was innocent at first. He was having an issue on the rig, a major component broke and the budget he had for supplies would not cover it. He would not get a check again until the job was done in the next week or so – at which time he could not wait to meet me and was so sure the physical chemistry in real life would translate and be the start of something so amazing – and was trying to handle it all. It was not my problem, he did not want to drag me into it…. except….  even though  we did not know each other at all, could I wire him some money to take care of the issue and he would reimburse me when he got his paycheck?

He never heard from me again and, for a few days, I got texts asking what happened. But I was too busy telling friends that this whole thing, weeks of ‘getting to know’ him was really an elaborate scam that I had almost fallen for. I looked online and sure enough, another educated woman fell for it too. In fact, there is a site (I can’t remember now what it was) where women posted the names and stories of men who they thought they were getting to know who scammed them in the same way.

I was too busy licking my wounds, kicking myself for not doing more, asking more questions, afraid I would drive him away. I was too busy feeling pathetic, like a loser and ashamed of myself. I never cried but I was angry. Very. And I don’t know how I will ever want to date again.

After a string of relationships, including my marriage, where every man I trusted has lied to me and cheated on me. After years of battling how to date and mother and be safe. After months of licking wounds from the attempts, I am totally done. There is nothing left.

So, ladies, take this as a warning. This is, by far, the worst experience I have had in online dating and the nail in the coffin in dating. If he seems to good to be true. Too accepting, too generic, too understanding, too willing to let you lead the direction of things, then he may not be real. I share my story now because I don’t want any other woman, or man, to fall for this scam that is now rampant in online dating. Even meeting the guy ahead of time if part of the scam for locals. So be careful, don’t give out any personal information and let those yellow flags turn to red instead of thinking you are just being too untrusting.

For me… well, I will go back to the amazing life I have with my kids and put dating on the top shelf for years to come. I am just happier that way… it’s not as if I would believe anyone anymore anyway.