I looked at my daughter’s list to Santa and my eyes popped out of my head.

And some Nerds. The candy. Pink and purple to be exact.

Now, listen, on my best day I could maybe swing the FitBit (which, by the way, she asked for last year, got and wore for one day soooo…. NO. And the Nerds? Stocking stuffer babeee.

But the other $2,000 worth of stuff, and that is if I can find a sale, is just NOT going to happen. And the Claw Machine? She meant the large, arcade type where hundreds of toys can be won. ‘You can find them online for $1,600, MOM!’ 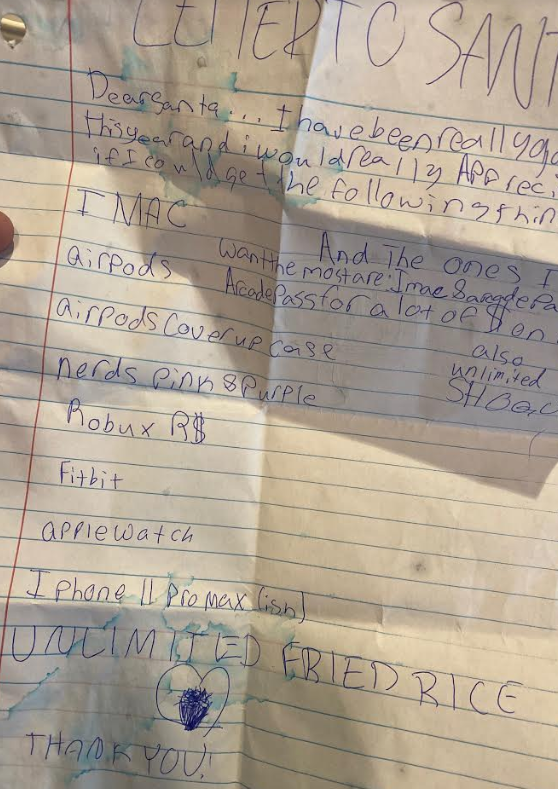 I was so shocked that I almost posted her list to Facebook. But then I saw that another mom, whose child’s list was just as rediculous, got hammered, slammed, ridiculed and shamed intensely when she posted hers. So I refrained. I just am not in the mood to be judged by strangers who think that the computer screen disolves all need for manners.

However, I had an issue on my hand. I could be a hard ass and simply just get her the Nerds and say, ‘Hey, life sucks. Sorry.‘

Or I could deal with this in a rational, fair and supermom way.

So I folded up the list and shoved it in my pocket. I figured I would explain it another way. Some other time.

Evasion… the supermom power to the stars.

And, of course, this came back to haunt me. Sure enough the list became a topic of discussion as one child’s rediculous thought process became another’s. Suddenly I had two of three children asking for iMacs and other items reserved for those with a JOB!

So when I said, ‘I don’t think I can swing that girls. You need to ask for more realistic gifts.‘

‘It’s OK. Santa will bring them!‘ Jollily they chimed.

To my complete, gut wrenching, where did I go wrong?, should I tell them the truth about Santa?, they are borderline believers anyway, shock; that was their response.

My response back – and I must say, a brilliant parenting move that I thought was so phenomenal that I HAD to share it with other struggling Christmas list parents who are considering selling a kidney to appease the list that has expectations far beyond our pocketbook – was to say;

‘Have you ever seen a story book where Santa is working on a tablet, laptop or Apple watch for the little kids? NO. He makes toys. Plain and simple. So please revert back to your 3 year old self and ask for a dolly!‘

The shock and dismay at my retort was matching to mine when I saw ‘the list’.

But I could see the little minds spinning, desperately searching for a story, movie or book that showed Santa handing over a $2,000 laptop to a 12 year old.

They couldn’t do it. I knew they couldn’t. Because as I dusted the cobwebs off all of the Christmas stories I had heard in my childhood, I could not find a single instance either. Bikes? Yes. Scooters? Maybe.

Yup. That you can do. Because I have an old gift card to a store that has art sets. And sewing kits. And things that will allow me to feed you next month.

Let’s not even talk about how my brilliant move saved my kids from going to school after the holidays and saying, ‘I got a $1,000 phone from Santa!‘ while the child listening, whose Santa wallet may not have thousands of dollars to appease a child to their liking, asks, “Why did Santa only get me a coloring kit? I must not have been good this year.’ Ego crushed. Comparisons shaping their self esteem.

And let’s not talk about the type of household that has kids who are 12 and 10 who still sort of, but are not sure, but maybe because they know mom is probably too lazy to do all the shopping, wrapping and setting up herself, that believe in Santa. I am OK with it. I feed the belief. I cherish it. Because childhood is TOO SHORT!

In any event. Let’s talk about reality.

So, after this mass revalation, my child sat down and wrote a new list.