Motherhood Nation: Own Your Weaknesses, Hone Your Strengths

Motherhood Nation: Own Your Weaknesses, Hone Your Strengths

Come join the revolution of support and truth in motherhood!  Submit your Guest Post Ideas to my Contact Me Form!

I am a good mom. But I am, in no sense, shape or form, a perfect mom. Nor do I strive to be one! Doing so would only be a futile attempt at failure.

My kids are getting to that age where they point out things that are true about my character but I don’t want to admit. Anyone who is a parent to a child ages 5 plus knows this reality. They are hypersensitive to what you say, speak the truth at all costs, and generally put you in your place when you least expect it.

For instance, I have been on the maddening journey to purge my house of all things ex – husband. I don’t have the money to just go buy what I want so I have been selling things off piece by piece, using the money I make to hunt clearance sales and discount stores for replacements. So far, my home looks better than it ever has and anyone who walks in is shocked by the massive changes!

Shedding my ex – husbands hoarding habits for my clean, organized, simple lifestyle is cleansing in it’s own right, I have to say. I recommend anyone doing this if they have gone through a marriage and divorce but stay in the same home.

Anyway, back to my point.

One of my large armories in the house was totally unsellable. So I donated it to the Salvation Army. But I needed to replace it and fast. It is where the living room television sits and I need my Netflix for Kids!

So a week or so ago I headed to Ikea to get an affordable television stand that I wanted. I purchased that and a new bookcase for the living room, further purging old items.

I brought them home with the intention of putting them together that day.

And then life – and by life, I mean kids – happened.

So when my kids went to their dads this weekend, it was still in box and the television still sitting in my office awaiting it’s new home. My 5 year old, Sarah, asked me when I was going to put it together. She was having Strawberry Shortcake withdrawal…

I told her I would do it over the weekend while she was at her dads.

She looked at me with this knowing look and said, “No you won’t.”

I started to argue and correct her but I knew she was probably right. 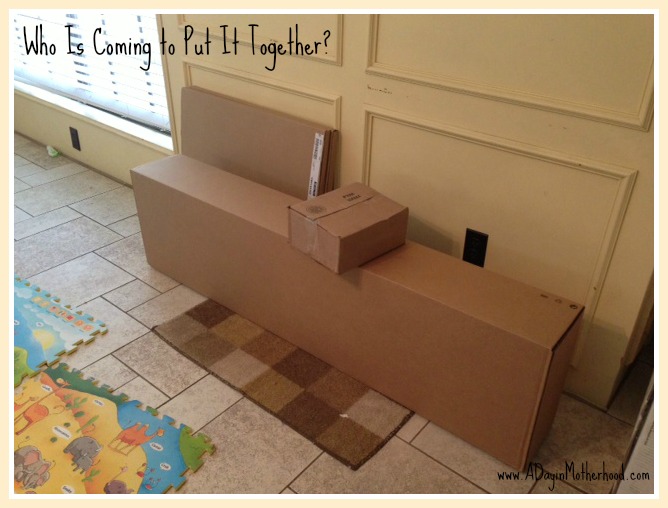 Sure enough, it is a week later and guess where the TV stand is?  Yep -still in the box waiting to be put together.

I could tell you that I have been busy working, putting together new opportunities and so on. But the truth is that one of my weaknesses is that I can procrastinate like a pro. I always find more important things to do. It is terrible but even my kids know it.

But ask my kids if I am a good mom and if I love them and if I spend time helping them with their homework, watching their ‘shows’, putting them first and you will get a resounding YES!

I think I have finally learned, through seven years of parenthood, that it is OK to not be good at everything motherhood. I can have weaknesses and still give my kids everything they need to grow into happy, healthy little girls.

I am easily sidetracked, have a habit of brushing them off when they are fighting instead of jumping in, have been know to feed them Cheetos for Breakfast, and have yelled at them when I didn’t need to more than once.

And if I focus on those things, I would just beat myself up all day.

So instead, I focus on the smiles, the love and the respect I get from them because they are very well taken care of. They are loved more than they can even fathom and I am proud of who they are becoming. Truth be told, they are becoming those girls mostly because of me.

It is time to stand up and say ‘Own Your Weaknesses, Hone Your Strengths.’ Because no mom is perfect. But there are a ton of moms who are perfectly imperfect in the absolute best way!

Have a story of motherhood that you want to share? Email me at lomargie@gmail.com with ideas and more!

Get more real posts and inside my head by subscribing to my Daily Emails!