I am a very lucky little blogger.  I get to do things most stay at home moms with a home business don’t get to do.  I am not sure how it happens, but I take every opportunity to express my gratitude for getting to do them.

So, I owe massive thanks to Disney for my behind the scenes conversations and educational information I received when I went to California for the Oz The Great and Powerful World Premier and got to spend a day learning all about one of my favorite new lovable characters, Wreck It Ralph. 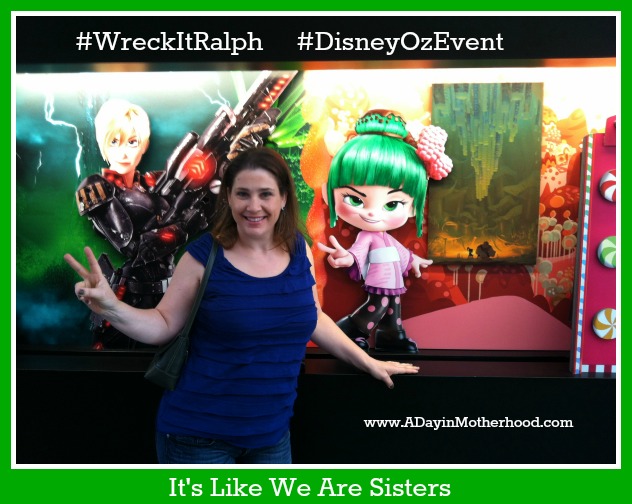 As I walked in, I felt like I was walking into his home.  In the building was everyone from the Story Creator to the Rigging peeps to the  Visual Development team.  So, all of Wreck It Ralph’s parents, I guess you could say.  And they are some seriously proud parents, I have to say!

Lining every wall, down every hallway, in every corner, there were Wreck It Ralph paintings,  memorabilia items, merchandise and even the Wreck It Ralph Arcade built right into the building.  I even got to play the Fix It Felix Video Game.  Well, they let me stand by it.  They must have heard about the Ms. PacMan incident of 1989. 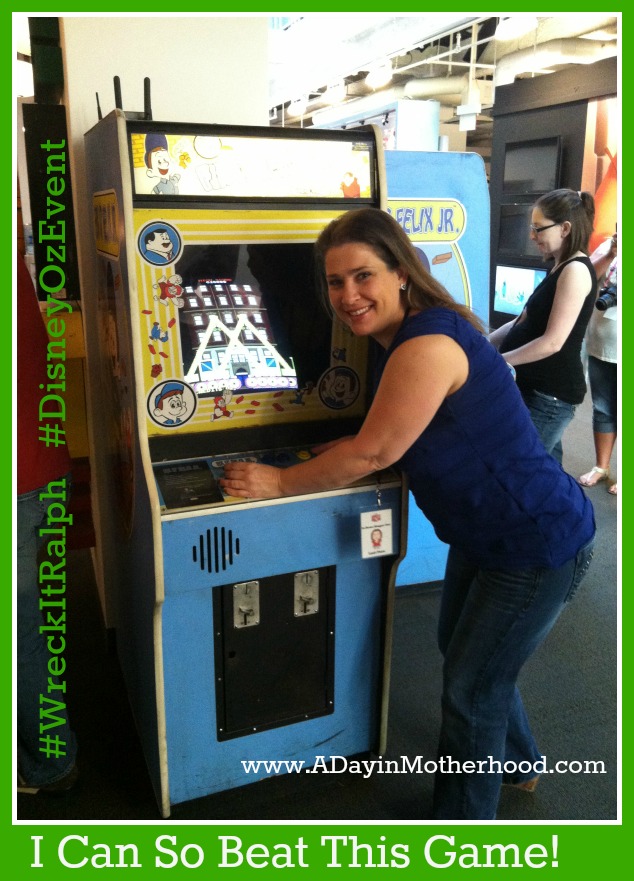 But as we were ushered into a room with Raymond Persi, who helped with the the Story of Wreck It Ralph, I learned that real jewels of the building were the amazing creative and entertaining people that make the animated film a reality!

See my whole day in my Google + Album below – just click and view! 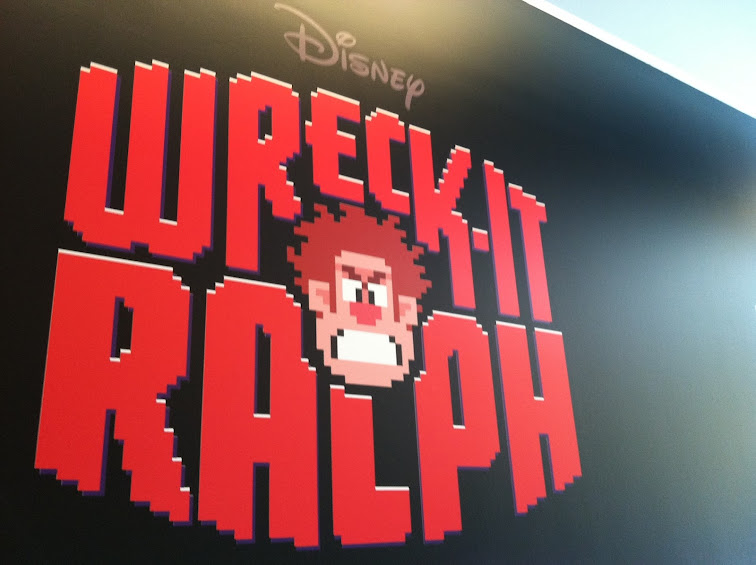 With Mr. Persi, we walked through the progression of Ralph, the story. We learned how they would come up with a scene, write it out, do a read through and change it all up again.  Things like deciding that Ralph should go alone to meet Vanellope and then adding Felix back in.  Little things that can change the story completely that we would never know once they put the final story on paper!  It was so neat to get a peek into the minds of the story creators! 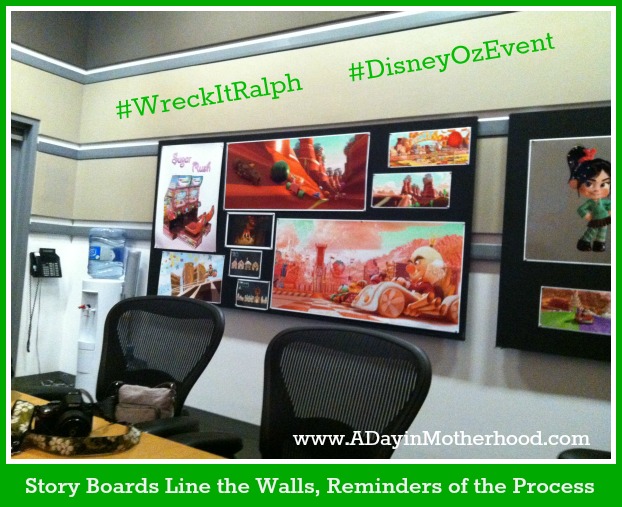 Next we had a chat with the Visual Developers, Mike Gabriel and Bill Schwab, and that was a BLAST!  We got to see everything from the original chalk drawing of Ralph to the caveman looking character to, finally, the brute of a character we love now.  Hearing how they thought he was too soft or too round or too harsh looking was really neat!  And listening to Mike and Bill talk about each development with enthusiasm was great! 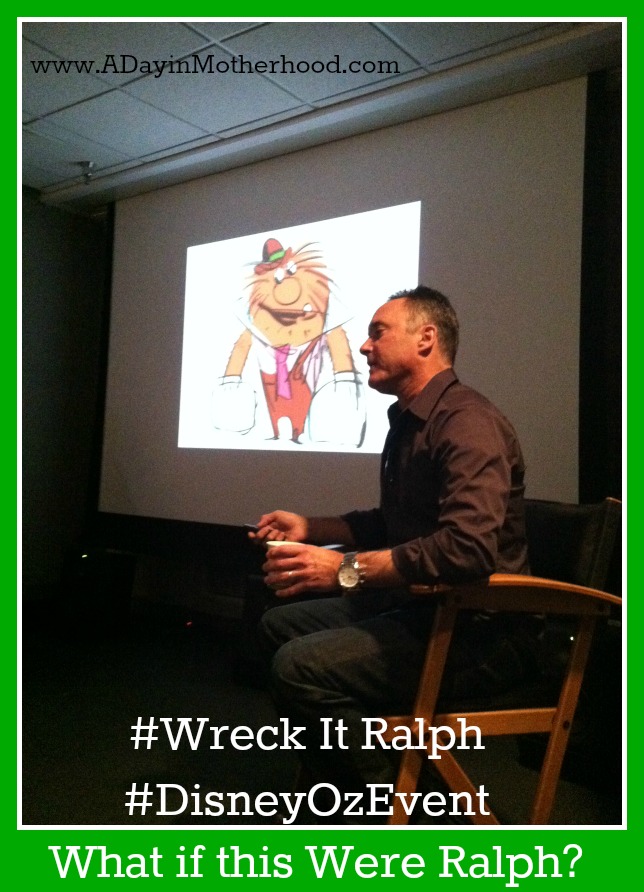 After that, we went over to the Rigging room.  Now, I told you a little about this process last week and it really was so fun to be able to move Ralph and make him do things I wanted.  I could make his head bigger, his hips more narrow, his knee turn out, his nose grow and so much more.  I loved listening to John Kahwaty talk about all the ways they sat at a computer with super sophisticated software and started the process of making Ralph ready to Wreck It.  This was the first step in giving these characters movement and though I think they would have hired me after I made him strike a pose, I think I’ll keep my day job! 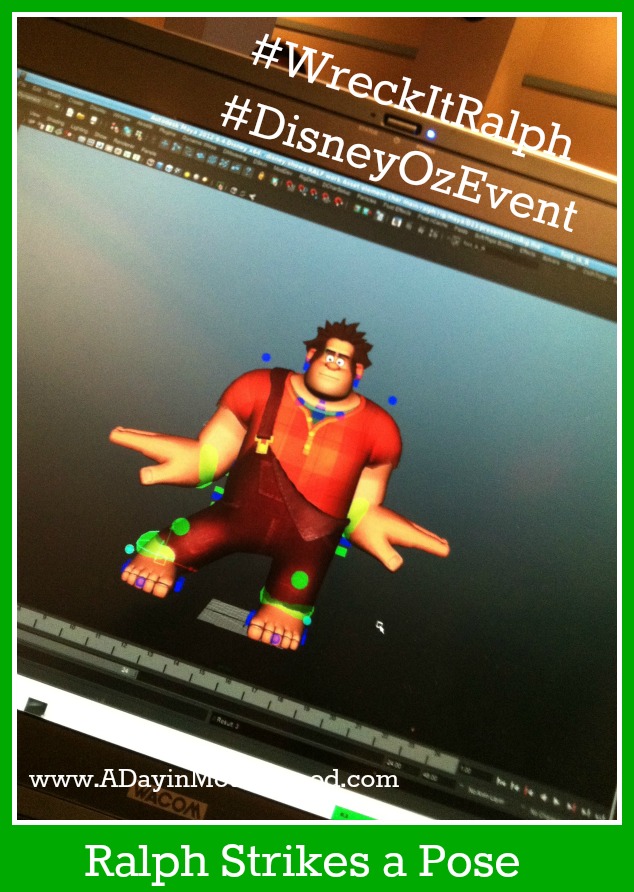 As with rigging, I talked a little more in detail about the Capture Stage that Evan Goldberg and team guided us through.  Check out the whole I Got to Film Wreck It Ralph! Well… Sort Of post with my videos too!  It struck me in this room that my thought process of how animated films are made is so basic that I barely even scratched the surface.  This high tech, highly detailed, intensified process is not only admirable, but so intricate that, working full time, it took years to complete this one film!

The next person we met was Amy Smeed in Animation.  Now, I thought animation was the actual drawing but no.  It is the giving of human characteristics to cartoon images.  So, as I watched Amy showing us how she was hooked up to sensors and how camera’s filmed her as she frustratingly sat in a chair, I was mesmerized.  When she did it, we watched the screen and saw how the character, Ralph, also sat down in a frustrated manner.  The thing is, they have to do this time after time after time again just to get every single human nuance, like the puffing of the lips and the rustling of the shirt just right.  Amy told us that this one 15 second scene took MONTHS to perfect.  MONTHS!  Can you imagine? 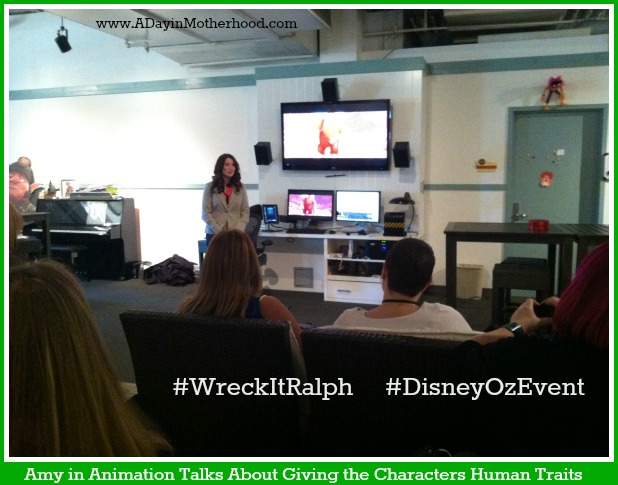 Finally, and sadly because this was so much fun and the people were so amazing, we talked to Anthony Mutalipassi and Nicole Elmes about Disney’s Digital Download and the benefits of being able to watch your movie anywhere at any time.  Basically, there is a code inside every Disney movie that you can use to download the movie to your PC, Mac, iPhone, iPad and more.  You can even download it to your movie viewing app on your internet savvy television.  The benefits of digital downloads are vast.  You don’t have to have the disc while in the car while the kids have their tablets.  You can turn on the movie on your phone when trying to keep your kids entertained while you are out and about.  You can let your kids have that special sleepover movie on the television without having to worry about the disc being scratched!

It really is a great feature and I use it all the time! 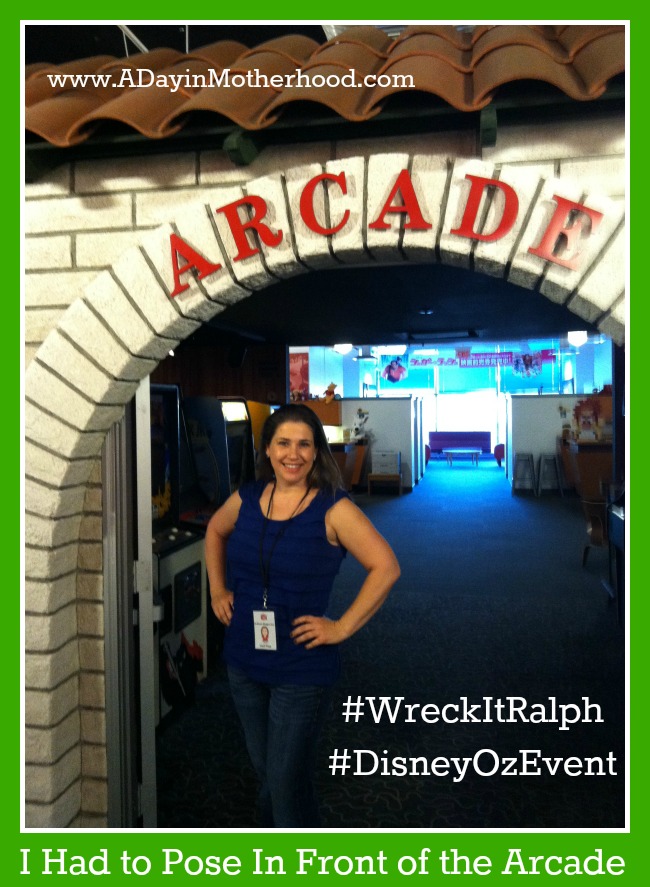 As we left that day, head full of information that so many never get to see, I had a love and respect for the people who work years on end on a film we watch in a few hours.  Next time your watching Wreck It Ralph, since I know you will all be running out and getting the DVD on March 5, 2013, think of the long, hard hours that went into making the movie a wonderful, entertaining film for your family.  I bet you will see that raised eyebrow, candy car and character in a different light!

Wreck It Ralph is now available for FULL  MOVIE Download from AMAZON and iTunes!