I Turned off the News and My Days Got Better

I Turned off the News and My Days Got Better

The news has a great affect on how we see the world. When I turned off the news, my days got better.

In this house, television is not king. I watch it late at night when the kids are in bed but mostly, unless the house is too quiet, it is off. The kids don’t watch TV during the week and that makes movie night even more fun around here. During the summer the house was way too quiet when my kids were at their dads. So I turned it on. ABC News and I became friends. I got hooked on the nightly news and would switch over to CNN if I wanted to know more about whatever story was on. I got to where I was watching the news when I woke up, during lunchtime and late into the night. I was even on the news a few times.

Then the Olympics happened and it was all day, every day athletic, amazing energy fun. It was during the time of our Olympic watching marathon that I realized that when I turned off the news, my days got better. I slept better, I was more patient and I didn’t feel this indescribable pressure all the time. A pressure that I did not even understand. It was just there. Pushing on me and making me feel like there was little hope and little time to breathe.

It was not until I turned it off that I realized the affect the news can have on a person. 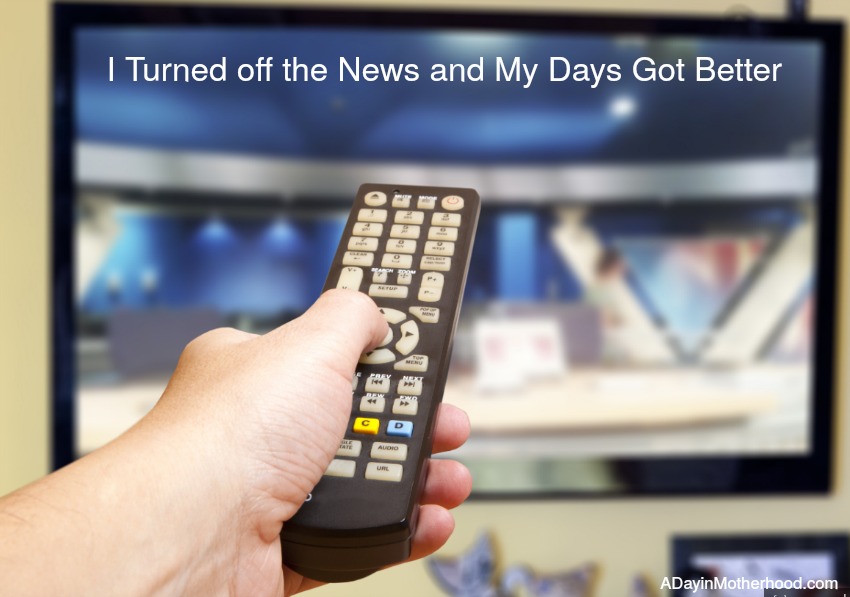 Here is the deal… the news seems to be inherently bad. If I pull up my local news channel on the app, I see 10 stories of shootings, murder, child abuse, animal abuse and crime. And all of the gory details are front and center. Literally, the only ‘feel good’ stories are in small print at the bottom after you have already decided the world is falling apart. I did not realize the affect the constant barrage of bad news was having on my psyche, thus on my parenting. As if raising daughters is not hard enough, I was finding myself more fearful for them and not allowing them to do things because of those fears.

It was not until I immersed myself in the Olympics and broke the habit of watching the news that I realized it’s affect.

It is not that there is anything wrong with the news, it does have it’s valuable purpose. I still do try to catch the nightly news so that I am not relying solely on Facebook for anything breaking or that I need to know about. But I think I overdid it. Watching story after story of negative behavior just sent me into a place where I did not think there was much good left in the world.

I noticed that I was much more stern with my kids about going to their friends houses and much more stressed when they went to their dad’s. I was not sleeping well, always worried that someone would break in, poison my dogs or that we would be in a major accident, shutting down the interstate for hours at a time. It really became a loop in my head. I even started looking for friends on the news and imagining stories included them. It was really getting out of hand.

So, I turned it off. The constant barrage of news, breaking stories and even the non-stop google searching and Facebook scrolling for the latest. I let my mind… rest, if you will. I let my thoughts become consumed with what I had to get done instead of the latest case that was causing the latest social media uproar. I turned off the mess of a political campaign that we have going on now and just let myself be quiet. I worked in complete silence, spent time with my kids without rushing to go see if some other detail had been released on the latest hot case.

I guess, like with anything that can become all consuming, I just had to stop. When I turned off the news, it was for my sake, the sake of my children and, honestly, the sake of my sanity!

Weeks later, I feel so much more in control of my life. I am not behind on any work. My laundry is getting done. My house cleaner. I am going to lunch with friends, fixing proper dinners for my kids. Helping with homework more, staying on top of them to get their chores done. That drag of despair and loss of hope seems to have vanished and life seems brighter. People nicer. The days hopeful.

It is amazing how what we watch can affect us. I never realized it before now. But turning that loop off has given me more balance in my life. So I will still watch so that I am informed. But then I will go on and live my life the rest of the time!