My neighbor came to me the other day and wanted to borrow a movie. As you know, I have many, many amazing films in my library. But when she asked for a heartfelt, sometimes funny, genuine film that was entertaining and wonderful from start to finish, I handed her Saving Mr. Banks on Blu-Ray DVD. 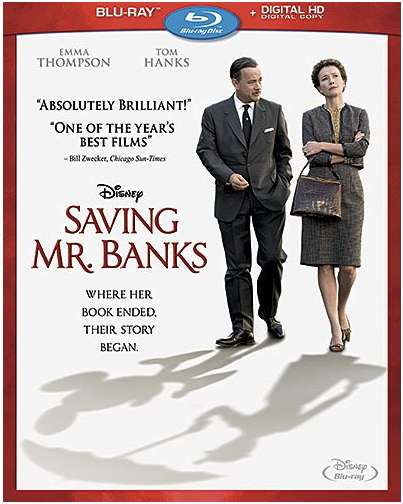 More than a movie about the making of Mary Poppins, it is the story of a person who shared a character who became a legend. Inspired by true events, two-time Academy Award®–winner Emma Thompson and fellow double Oscar®-winner Tom Hanks topline Disney’s “Saving Mr. Banks,” inspired by the extraordinary, untold backstory of how Disney’s classic “Mary Poppins” made it to the screen.

For those two short weeks in 1961, Walt Disney pulls out all the stops. Armed with imaginative storyboards and chirpy songs from the talented Sherman brothers, Walt launches an all-out onslaught on P.L. Travers, but the prickly author doesn’t budge. He soon begins to watch helplessly as Travers becomes increasingly immovable and the rights begin to move further away from his grasp.

The movie, the story, the filmmaking and the inspirational story will touch everyone. There is a reason this movie touched America’s hearts. Get your copy today so you can see why too!