I was so incredibly bummed that I missed the preview for this movie.  I am beyond itching to go see it this weekend! And every time I see a clip, I am more excited!  I have heard so many amazing things about this movie from people who have seen it.  It does not seem to disappoint at all! 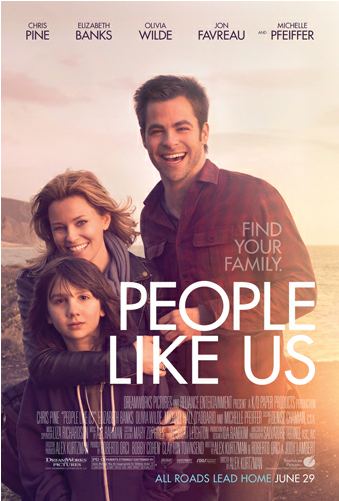 Check out this clip below and then join me in hiring a sitter – or leaving the kids with the husband – and getting to the theater STAT!  Oh, and Follow People Like Us on Pinterest, too!  Now that is a great board!

From DreamWorks Pictures comes “People Like Us,” a drama/comedy about family, inspired by true events, starring Chris Pine (“Star Trek”) as Sam, a twenty-something, fast-talking salesman, whose latest deal collapses on the day he learns that his father has suddenly died. Against his wishes, Sam is called home, where he must put his father’s estate in order and reconnect with his estranged family. In the course of fulfilling his father’s last wishes, Sam uncovers a startling secret that turns his entire world upside down: He has a 30-year-old sister Frankie whom he never knew about (Elizabeth Banks). As their relationship develops, Sam is forced to rethink everything he thought he knew about his family—and re-examine his own life choices in the process.

In a story inspired by true events, Sam, a twenty-something, fast-talking salesman, is tasked with fulfilling his estranged father’s last wishes—delivering an inheritance to a sister he never knew he had.

PEOPLE LIKE US hits theaters everywhere on June 29th!