*I was on a press trip for this event. No compensation was received.**

I don’t always catch the hit show Nashville, but when I do, I am always impressed with the show. How many actors can sing AND act convincingly… much less a whole cast. The songs are amazing and Connie Britton and Hayden Panettiere are the perfect – like you/ hate you – duo. Add sexy men interests like Charles Esten (Deacon) and Eric Close (Teddy) and you have a show that everyone just has to see. 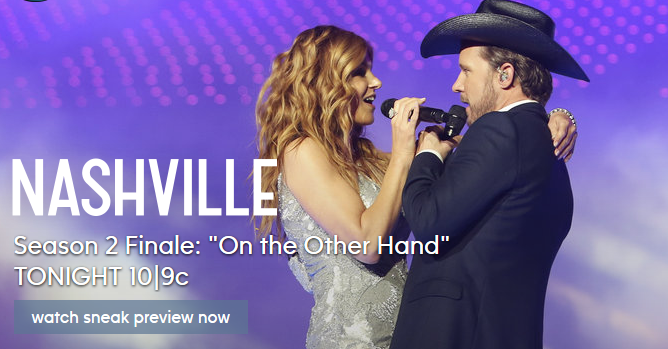 While in LA recently, I was treated to the season finale of Nashville and it is worth the watch! You will be shocked, surprised and thrilled with the twists and turns.

Also while there, we got to talk to the Executive Producers Callie Khouri & Dee Johnson who answered all kinds of questions that we have. As far as everyone is concerned, the show will be back for season 3 and the story lines will be more explosive than ever! In the middle of listening to how they had Connie Britton on mind all along for the lead role as Rayna James, and how finding the stars who also sing all of their own songs, we heard about how this show is giving unknown songwriters a chance to showcase their work.

But as quickly as we got into it, we were interrupted by a surprise visitor:

It was so great to hear ‘Teddy’ talk about his role and where he hopes he will grow next season!

Catch the Season Finale of Nashville TONIGHT and meet me on Beamly to talk all about it!