*I was on a press trip for this interview. No compensation was received.**

Million Dollar Arm hits theaters May 16, 2014. The story is uplifting and unique. Not a typical sports film, this movie will make you laugh and inspire you to do something amazing. I got to sit down with the real life people who inspired the characters and the story. J.B. Bernstein, Rinku Singh, and Dinesh Patel are so proud that their story is being told. A journey that started as a business saving trick ended in the life changing experience for all three of them. 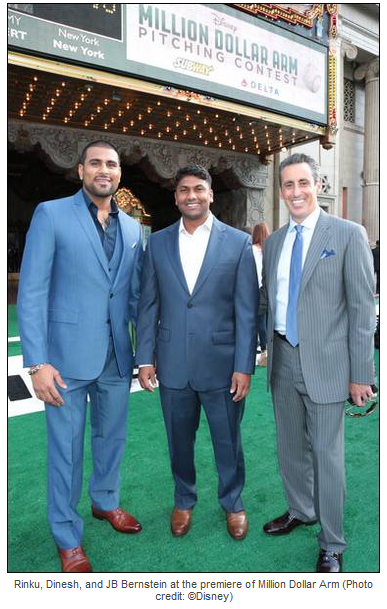 J.B. is the real life sports agent who created a contest called Million Dollar Arm. The concept was to tap into the Indian market to find a major league pitcher and get them a try out in less than a year. Along the way he learned more about himself than he ever thought he would.

Mr. Berstein is a jovial, confident man with a smile that lights up the room. Clearly proud that his story is being told, he talked about how his journey from bachelor with a drive for success became a life changing one. From his travel to India and his quick education on how to do business in that country to the pride he has for the two kids who grew before his eyes, J.B. is an humble man with a very valuable life lesson in his pocket.

I think that I speak for all of us when we say that this is a really personal journey. It’s not like your traditional Business deal that I’ve done. This is something that obviously is a very pivotal point in our life. So our hope is really two things. One is that people take away what these guys have endured and what they persevered in order to be successful/ Also we hope they take away that lesson that dreams are possible in this Country more so than maybe anywhere else in the world. Now for kids, to be able to look at Rinku and Dinesh as role models and say ‘Look, if these guys did this’, I can do anything.’

Rinku is an American baseball player. A transformed man who was invited to continue to America after his juice’won him the privilege in the first ever Million Dollar Arm Contest. The culture shock of coming to America has worn off after six years but he is still so grateful for the opportunity. When asked about learning the game of baseball, he responded with a smile.

Really takes some time. Just like, if you took American Baseball Player and make them become a cricket player, they have no idea how pitch in Cricket, right? So that was totally different world for me coming here and playing Professional Baseball. I had no idea. It did take a year but I believe that it doesn’t matter what you’re doing in your life if you’re willing to give whatever you got inside and out, you are gonna succeed. So it took to a year. 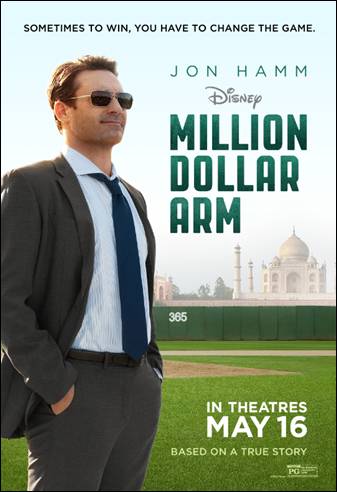 Dinesh is a quiet man with a very strong bond to his family. After he won a spot with the Pittsburg Pirates, he played for a while and then went home to his family. It is understandable that he would want to go home. The film shows the strong bond he has to India and his family and it is very touching. So his English is a little rusty but it is apparent that he carried great pride in his accomplishments and the movie.

This is a big deal for me. I’m very happy and my family is also happy so good deal.

The real life people that inspired the characters of Million Dollar Arm are just as interesting and inspiring as the film portrays. Be sure to see the film in theaters and come back and tell me what you thought!