The game in this giveaway is for XBOX360 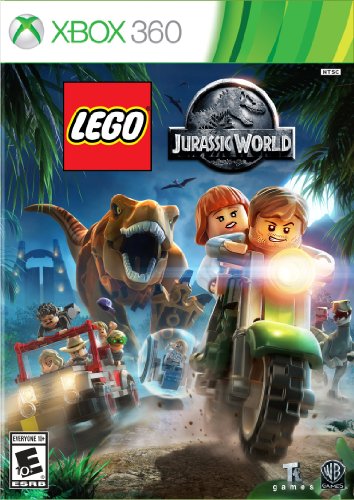 IT IS HERE! The soon to be amazing blockbuster movie, Jurassic World is in theaters NOW!! I have been reading the reviews from bloggers and other media who has seen it and they are raving!! I, for one, can not wait to go see it! To celebrate, I have been hosting a few Jurassic World giveaways. Enter to WIN the Stuffed Jurassic Park backpack (ends 6/17) and the Hasbro Toy and Jurassic World Books (ends 6/15), too! After you enter, come back and watch the awesome trailer for the LEGO Jurassic World Video Game below! Steven Spielberg returns to executive produce the long-awaited next installment of his groundbreaking Jurassic Parkseries, Jurassic World.  Colin Trevorrow directs the epic action-adventure based on characters created by Michael Crichton.  The screenplay is by Rick Jaffa & Amanda Silver and Derek Connolly & Trevorrow, and the story is by Rick Jaffa & Amanda Silver.  Frank Marshall and Patrick Crowley join the team as producers. If you were like me, you saw the original Jurassic Park as a kid. The movie had an impact and entertained you. In fact, if you caught the NBC replay last week, you were reminded why the Jurassic movies always left viewers wanting more. With stars like Chris Pratt and Bryce Dallas Howard at the helm and the special effects technology being even more advanced, Jurassic World is set to blow your mind with what could have been.

Along with the movie, toys are always a hit! I was in the Lego store last week and the Jurassic World sets are awesome! But even more exciting is the LEGO Jurassic World Game! I am anxiously awaiting my copy so that I… I mean my kids… can enjoy it!

Experience the wonder. Discover the unforgettable. Get your tickets to ‪#‎JurassicWorld today: unvrs.al/JWtix Want to WIN your own LEGO Jurassic World Game!? ONE of my readers will win the XBOX360 formatted game! Just enter below and GOOD LUCK!