During my wonderful trip to Los Angeles last month for the Red Carpet Premiers of Thor: The Dark World and Delivery Man, we bloggers had a top secret mission. Sneak into a theater on a lot at Disney Studios and screen the latest Marvel DVD coming out just in time to make it to those stockings for the Holidays! Iron Man and Hulk Heroes United on Blu-Ray DVD Combo pack is out December 3, 2013 and it is a must see for any Marvel fan! 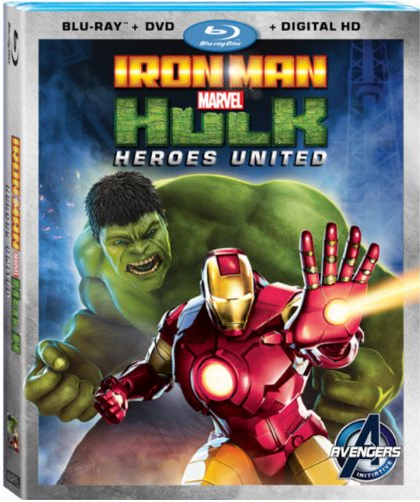 As we sat in the room and watched about 15 minutes if the movie, I could tell that this CG adventure was going to be a hit for anyone who loves anything Marvel!  Iron Man and Hulk team up to fight the evils of Zzzax.

Marvel makes cinematic history again with the most unexpected team-up in the universe! Joining forces for the first time ever, Hulk’s pulverizing brute strength and Tony Stark’s high-tech brainpower come together to face off against the ultimate enemy.

When “Zzzax,” a seemingly invincible, energy devouring monster threatens to destroy the planet, Marvel’s unlikeliest pairing of Avengers is mankind’s only hope. Alone, neither can defeat the awesome power of Zzzax. As a duo, they just might have a chance – if they can find a way to work together without smashing heads before time runs out!

Packed with explosive action, loaded with exclusive bonus features and presented in groundbreaking Marvel CG Animation, Iron Man & Hulk: Heroes United is a must-own movie event that will blow you away.

Check out the clip below:

There are some awesome bonus features on the DVD as well!

Marvel “Inter-missions” – Marvel puts a humorous twist on their old-school original animated series. What better way to take a break from fighting villains than hitting pause and enjoying a little comedy with Marvel Mash-Ups.

Marvel Team-Up with Ryan Penagos and Joe Q. – Super Heroes are larger than life on their own. But when they join forces with another, they become a force to be reckoned with.  Marvel’s Chief Creative Officer, Joe Quesada, joins Ryan Penagos (Agent M) in an intimate and lively one-on-one conversation about these Marvel Team-Ups.

Which two Marvel super heroes would you like to see together? Get your collection started with this awesome DVD out December 3, 2013!