BRAVE: Expert Animation with Heart + The Director Speaks + Activity Sheets for Your Kids

BRAVE: Expert Animation with Heart + The Director Speaks + Activity Sheets for Your Kids

Go see a movie tonight.  Pack up your kids, your anticipation and your expectations and let Disney Pixar impress you once again with the fast-movie and adventurous BRAVE!

This movie ROCKS!  Just as you would expect from the film studio that let’s their movies be told by the film makers with little intervention from the studio.

We can start with the amazing animation, the incredibly colors, the attention to detail and the fact that no matter how many times I see a Disney Pixar movie, I am always impressed with the talents of the animators.  There is a reason that they are tops in their field and producing hit after hit on the widescreen.  BRAVE is a testament to the creative mind being able to flourish!  And the 3D affects are fun and make the movie POP!

The fiery princess is like no other and her strong, stubborn, attitude is refreshing to see in a princess.  As a mom to three girls, I appreciate that they were able to see such a  strong, charismatic girl fight for her dreams and be humble in a lesson learned as well.  I love her spunk, her tenacity and her nontraditional love of all things tomboy!

But more than that, the story and the bond that is forged between mother and daughter is  heartwarming and endearing.  The lesson is timeless.  And I think every parent will enjoy taking their kids to see BRAVE!

Check out this fun clip from the movie:

I took all three of my daughters, all under 6.  There are some dark and scary scenes, just like in other Disney movies, and my 5 year old did curl up on my lap.  However, my 4 and 2 year old mentioned that they did not like one scene, but they watched it and talk about the movie and seemed to enjoy it.  And my husband and I really liked it too!  There are a few little jokes that only parents will ‘get’ and we thought that was pretty cool!

To help your kids really enjoy the characters, download and print these activity sheets! 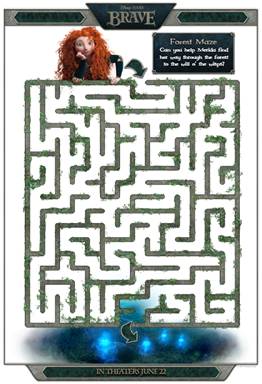 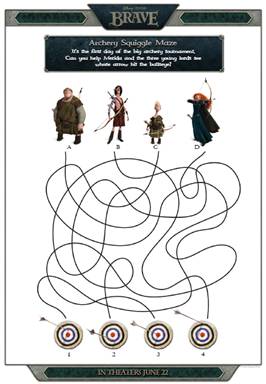 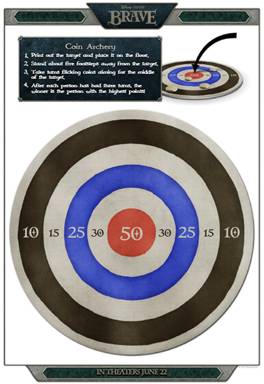 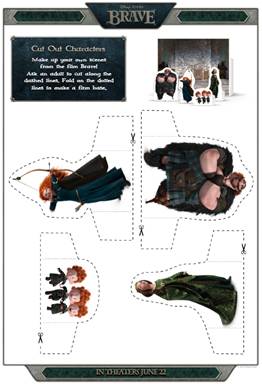 After the movie, the Director – Mark Andrews –  stood up to take questions!  Yep, he was in our preview audience!  How cool is that? I’ll paraphrase some of the highlights!

When asked about how he came up with the idea for the movie, he stated that he had always been fascinated with Scottish culture and the time period in history that BRAVE was based on.  He, apparently, has the scariest desk at Pixar with swords and daggars and such everywhere.  So, as the idea for a movie based on the time he thinks he should have been born in developed, he wanted a strong, willful character to lead the way, shooting bow and arrows all the way.

When he talked about how long ago the movie was actually finished and how hard it was to bring it to screen, everyone was amazed that the wrap up and approval was only 4 weeks ago!  In this digital  age, a film can become reality faster than ever!

He lit up and was excited to share his passion for making sure the characters were strong, believable, and lovable.  It was no mistake to make this princess red headed with huge blue eyes, a quick tongue and a stubbornness not often fit for a princess.  He shared that, not unlike his own home life, the chaos of the three sons and the drama between the mother and daughter boast a great deal of his real life on screen.

This is a film to see!  So gather everyone up and head to the theater because it opens JUNE 22, 2012 and then come back and tell me if you agree that it was awesome!