An Open Letter to President Trump

An Open Letter to President Trump

I had a dream last night that I spoke at your inauguration. I don’t really remember what I said but I stood up there, you in the background, calm and collected, delivering a speech that got applause. Before this election, I never really paid attention to politics. In fact, I loathe politics. But this election cycle seems to have gotten everyone’s attention and has gotten everyone thinking. So I sit here, the image of the dream seared into my psyche, and I write an open letter to President Trump. Because you need to hear from someone who is real. 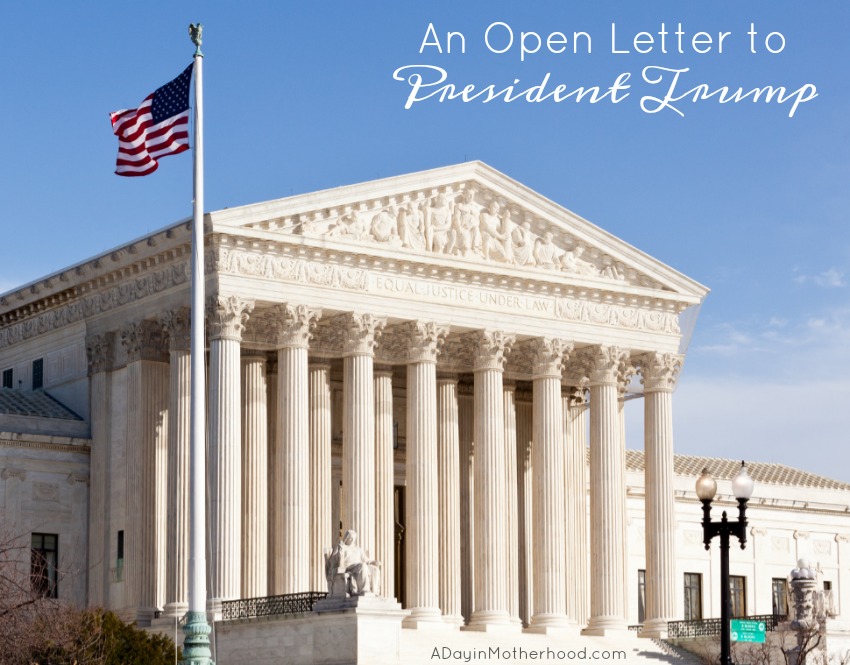 I am a single mom to three girls. I am a small business owner, with ADayinMotherhood.com being at the helm of my projects. I am a taxpayer, a christian, a dog lover and a woman. I spend my days trying to take care of my girls, my house, my business and myself. My finances are probably about average, your typical middle class wage, with lulls in the business cycle that always make me nervous. I do not live an opulent lifestyle but live a full and rich one.

My personality is pretty calm. I don’t anger easily and I don’t fear the world. I see a lot of good in it and I try really hard to have a positive outlook. Of course, a lot of that came from turning off the news completely in the house. But since I work in social media, I do still see Facebook, Twitter, Instagram and all of the other news that people seem to care the most about. As the election closed and you were named President of the United States, I saw a real shift in the posts and opinions I was reading. Frankly, Mr. President, I am saddened and shocked by what I see from everyday people like me since your win.

The truth is, Mr. President, I hope you do succeed in the office. I hope that you can break through the red tape in Washington that seems to hold regular citizens hostage. I hope you can fix the health care system. That you can make the tax system more fair. That you can mend the fences so badly demolished after years and years of lobbyists, special interest groups and the richest of the rich milking regular citizens to dryness. I hope you open the letters from regular people with real concerns, that you spend your extra time thinking about the time they took to reach out and how to respond as opposed to Tweeting your anger at every little thing someone says about you. I may not be thrilled with you in office, but you ARE my President now and I DO want you to be a positive force in government.

I pray that you can step up and be a people’s President as opposed to the bullying, closed minded persona you have displayed. That I can tell my little girls that you are the mark of a man and not an example of what not to be and who to steer clear of. That I can tell them that their future will be better because you were in office. That you were not the most corrupt president in the United States of America that pundits say you will be. That we are not left with a society so divided that the wars of words I see on social media become wars in the streets.

I hope that the things that you really are talented in, business management, business growth, empire building, negotiations and wealth management are put to good use in Washington. That the knowledge that comes from building the Trump empire will actually benefit working America. That while I am working 50 -60 hours a week on my small business, 30 of those hours aren’t spent making money just to pay my taxes like they are now. That those taxes that I do pay, and am fine paying my fair share as a citizen, actually go to the places they are supposed to. That I can see the results of that hard work as opposed lining the pockets of politicians and their pet projects.

I urge you to allow people to be people. For them to love who they want to love. Build the families that they want to have. Promote the causes that they want to promote. That discrimination, racism and the further separation of classes in the country truly do start to blend into that melting pot we all want. I hope that, despite your words and actions of the past, you can look into the eyes of any American Citizen… black, white, woman, man, child, gay, straight… and honestly be able to tell them that you are working hard for them.

But I care about my country and the men and women and children who live in it. I beg of you to please take care of her. Take care of her like you would a new born baby. If that means hiring the best Nanny this country has ever seen, I am OK with that. We all are stronger with the best people for the jobs around us. But put her first. All the time. No matter what.

Please do it well.