I Won’t Apologize for Yelling at my Kids

I Won’t Apologize for Yelling at my Kids

I yell at my kids. There, I said it. Alert the presses, take note of the time and date and get ready to disagree with my stance as a mom. But I do and if any parent says they don’t, then I will alert the presses! Why do I yell at my kids? Because it works.. sort of, more on that later, and because with three daughters and three dogs running around, it is often the only way I can manage to get them to do one little thing.

Thing is, at some point, we all yell at them, don’t we? When they are talking over us or purposely playing when we have asked them to stop – 80 times – and are basically acting like we are not there. I gave up my role as invisible mommy years ago when I realized that if I didn’t, my kids would never respect me enough to listen to advice they need growing up. 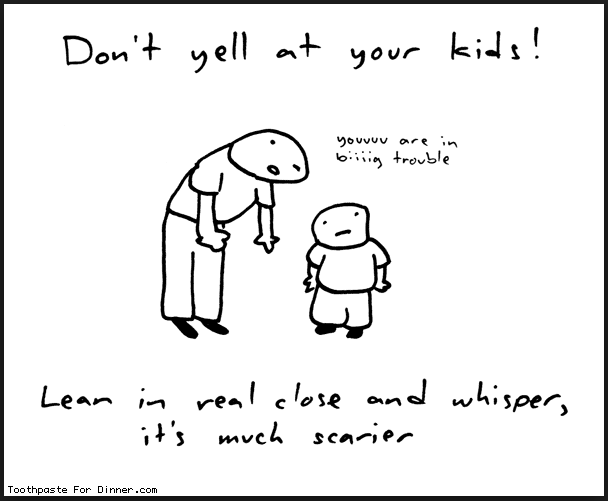 But I take it further. Not only will I yell for attention over the chatter of three little ones, but I will – loudly – call them out when they are disrespecting other adults. I can not stand kids who are rude! Literally, it is my nails on a chalkboard moment in motherhood. I can’t stand it, won’t tolerate it and it will never be acceptable to me. Not teachers, not friend’s moms, not coaches, not my parents, not that lady in line at the supermarket who I don’t even know. I will yell at my kids in public and I dare anyone to come tell me that it is not OK.

The girls were invited to a birthday party at the gymnastics place a few weeks back. We happily bounced into the gym ready for games and cake. The girls scurried upstairs to the birthday room and the commencement of loud, little girl screeches and chatter ruled. At one point, the instructor came in and told the girls to head to the gym. 10 pairs of scrambling feet ran down the stairs.

When there, my girls were chatting and laughing and cutting up with their friends. I heard the instructor tell the girls to listen up for the rules. My kids, and a few others but I am only concerned about mine, kept chatting and dancing around as if the instructor had not spoken. I said their names, “Katie, Sarah and Megan, you need to listen now, please!’

Barely a lifted head in recognition of my instruction. Meanwhile, the instructor is still trying to get silence.

I walked over to my girls and told them, again, to listen. It worked for a moment but the second I stepped away, they were at it again. So I yelled. Loudly. ‘I told you girls to hush your mouths and listen NOW! If I have to tell you again, I will put you in the car and take you home to do chores!!’

The entire room went silent. My three girls stunned. All eyes were on me, But, by golly, my girls were now quiet and listened intently while the rules for the party were laid out.

Feeling no guilt or shame at all, I headed to the chair with my camera while the kids were set free to run the obstacle course in the gym. At some point I thought about turning around and telling the other parents that I was sorry I yelled but I was too busy making sure my older kids were not running over the little ones.

One of the dads, an older gentleman that is the father of my middle daughter’s best friend came over. I started to apologize lest he thought I was yelling at his sweet girl, but he stopped me and said, ‘I came to thank you. I wish more parents would make their kids behave!’

You know what? I do too.

We chatted for a moment about how parents seem to be so afraid of what others will think that they let things slide that they know they should not. He and I were raised in an era where parents could discipline you anywhere without judgement. They kept you on your toes and always trying to make the right decisions.

So while I will certainly listen to people’s opinions, after all – the best parents weigh all advice before taking or discounting it – I won’t apologize for actually being a parent. If it makes you uncomfortable for me to correct my child’s rude behavior in front of you imagine how much it would bother you that they were not corrected on the behavior?

I won’t apologize for yelling at my children. Not if it means they will show the respect every adult deserves!