What to Do When a Child Lies

What to Do When a Child Lies

I suppose it is that time in life.  Where the little one becomes the bigger one and she starts to understand consequences.  Therefore, she starts to try to get out of trouble before it finds her.

This evening my children were playing nicely while I was doing the dishes.  I was listening as I wiped down counters and loaded the dishwasher loving the fact that my kitchen window was open and an almost springlike breeze was drifting in.  They laughed, they screamed with glee, they chased each other around.  It is one of my favorite times of the day.

Somewhere in the chatter I hear, “Mom, Sarah cut my hair!” 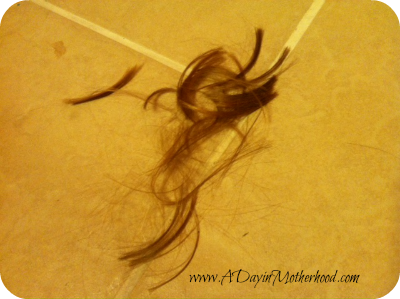 I sort of ignored it knowing full well that Sarah, of all of my children, would be cutting no one’s hair since the Great Haircut Debacle of 2012 where both Sarah and the little one, Megan suffered the awkward, lopsided haircuts that they treated each other to.  It took a fill six months to get their hair back to a reasonable shape and they heard over and over and over again why they should not cut each others hair.  With child safety scissors, mind you.  Don’t tell me those don’t cut hair!

In any event, I go about my business thinking it is big sister trying to rile up middle sister so that she and little sister can start the cry fest that befalls this house every night around 7:04 pm.

And I hear it again, “Mom, really, I’m not kidding, Sarah cut my hair!”

I tell Katie to come see me so I can inspect said hair cut and ascertain the damage… and to hopefully call her bluff and scold her, once again, for blaming her sister for imaginary acts!

As she came bounding into the kitchen, I could hear the other two playing in the playroom.  Katie came from the bathroom.  Surely Sarah would have accompanied her with an excuse if she had cut her hair.

But sure enough, right on the side of her page boy haircut was a chunk missing.  Not terribly noticeable – unless your her mother – but definitely cut.

I asked her if Sarah really did cut her hair, doubting that my super smart, super sweet middle daughter would want to deal with the consequences of cutting another child’s hair, and Katie promised that she did!

Somewhat frustrated, I called Sarah into the kitchen!  She came running in with a super sweet grin on her face.  She was not wearing that “Oh no, I am caught!” look.  Nor were her sparkling eyes showing signs of distress knowing she had broken a rule.  I asked her if she cut sister’s hair and Katie chimes in with, “Yes!”

Sarah genuinely looked confused.  She said, “No, I didn’t do it.  I know I didn’t.  My hand did not have the scissors!”  I could tell she was telling the truth.  There was no stress there… no signs of being cold busted.  So I asked the little one, “Squishy (she’ll never outgrow her baby nickname), Did you cut sister’s hair?”

Nothing but truth coming from that child.

So I turned back to Katie and I asked, “Are you telling me the truth?  Did you sister cut your hair or did YOU cut your hair?”  Even before the tears started, the nose wrinkled and the mouth opened to wail in protest, I knew I had caught my six year old lying to me.  Straight to my face, no remorse until she was caught, throwing her sisters under the bus without a care, lying.

Furious, I asked her what she thought she should lose for lying to me.  She said her tablet and I agreed. So I grounded her from screen time for the entire next day.  She was devastated.

Of all the things I can not stand as a person, it is being lied to.  I lied as a child and I still feel guilt about it.  Lying accomplishes nothing and it achieves the opposite of what the ones who lie are trying to get.  It is a well known rule with my children that lying is a grave mistake in my house.

So, really, I was shocked.  I could not believe that my 6 year old had contrived to be so mischievous and unconcerned with creating an untruth from scratch.  And I am not sure what to do about it.  But, as sad as it is, I now will have to question everything she blames her sisters for.  Because she could be lying!  She just proved it!

I know she is testing her boundaries, learning her limits, feeling around for the severity of consequences.  It is part of growing up.  It is part of challenging authority.  We all go through it.

But I have to admit, the first time it happens, it hurts the mommy heart just a little bit.  Another sign that my little baby is growing up way too fast…

And now I have to worry about trusting her.  And that bothers me just a little more.