What I Learned While Watching My Children Play

What I Learned While Watching My Children Play

For about half an hour now I have been sitting quietly at my computer flipping around Twitter and Facebook looking for inspiration to take my blog to the next level.  But I am distracted.  Because for that same half hour, my kids have been sitting in front of my on their tablet playing ‘ guess the Spongebob character’ or some game along those lines that has them laughing and joking and acting like….  children.

So, basically, Heaven is in my house tonight. 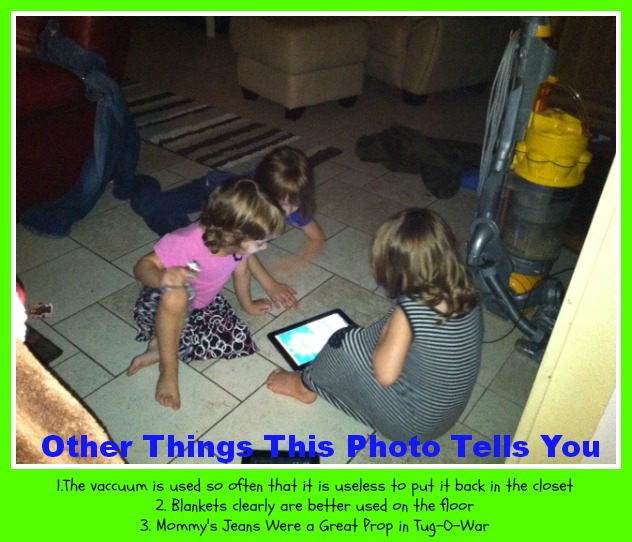 But as I listen – and stop to just stare and smile that television mom smile in their direction every minute or so – the realization that I don’t do this nearly enough, hits.  I don’t watch my children play enough.

Boy, am I missing out!

Not only have they totally been getting along, an event so rare that this possibly needs to be studied by science, but they are funny, cute and actually seem to like each other.  A reality that is not often shown in this house, I won’t lie!

But I am loving the interaction – sans the ‘you’re a bootyhead’ name calling , of course – and I am laughing right along with them as they navigate sisterhood like the amateurs they are.

The age differences have disappeared, there are no oldest and youngest, no taller and shorter.  Right now, playing games with each other, they are just children.  Reveling in being up too late, laughing like hyenas and egging each other into louder screeches of pure happiness.

I am so lucky.

These little girls are teaching each other more about love, support and the joy of life than any television show, video game or even me. And I might even be a little jealous at their closeness, their understanding of each other and their innocence.

As we now return to our regularly scheduled evening of “who is the biggest drama queen”, I say a little Thank You to the Big Man above.  Because tonight I got to watch my children play and was reminded that doing this more often makes life too precious to be mad at.