While in New York for the War Horse Red Carpet Premier, we were treated to some other, once in a lifetime “perks” that just made the trip that much more special.  One of them was to see Mary Poppins on Broadway which was fantastic!

And one of the others was to have a private tour with the Kimberly Tuttle, our fabulous and very well informed guide at the New Amsterdam Theater where Mary Poppins currently runs!  We actually were the first group touring the historic theater and getting to go into a props room as the theater is planning to make tours permanent!  I hope they do…everyone should see the beauty and classic elegance that I did!

As I show you photos from that exclusive tour, including the props room where I carried Mary Poppins umbrella – and secretly wanted to bring it home in case that was the magic that worked on the children – wore her hat, oohed and aahed at the marvels of costume making for Broadway shows and more, I’ll relay some fun stories that Kimberly told us!

First of all, the New Amsterdam Theater was built in 1902.  It’s ornate, original art that decorated everything from the walls to the handrails was breathtaking.  Through the years, it changed hands and at one time, was a movie house.  Well, the owner of the movie house decided that the walls needed to be darker and the architecture not so apparent.  So he had the entire theater, walls and ceilings, unique carvings included, painted a dark brown!  Yes!  I could not believe it.  Imagine all of these beautiful pieces painted brown?

Well, when Disney bought the theater in the 80’s-  which was a BOLD move in that area of New York City at the time – they commissioned people to come in and remove the brown.  They expected to find the works in shambles under the paint.  Instead, the paint preserved every piece in almost new, pristine condition!  So they had to have people come in and AGE the theater!!  I thought that was so hysterical!  Aging an 80 year old theater?  Really?  LOL

They did a fantastic job though and it was stunning down to every detail. 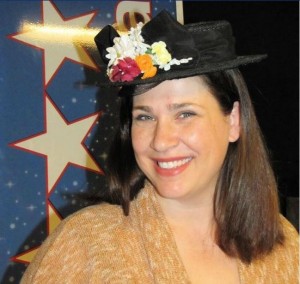 Another great story revolves around the popular Broadway hit back in the day called Ziegfield Follies.  Apparently, Mr. Ziegfield was quite the ladies man and there is even a painting on the ceiling of the theater of his favorite ladies.  But, I guess he was not that loyal to his ladies because, in the theater lives a ghost.  Her name is Olive Thomas and she is one of the women on the Ziegfield painting.  According to the many who have seen her, she walks the stage in, if I remember correctly, a green dress.  I guess she just decided that the New Amsterdam Theater was a great place to stay near her love!

In addition to learning all about the New Amsterdam theater we got to head into the props room and see the magic behind the theatrics!  This room is an amazing place!  First of all, there was no way I was getting into Mary Poppins coat!  The actress that played her was teeny tiny!  So I stuck to the umbrella and hat!  I snapped photos and enjoyed looking at all of this fabulous material while Kimberly talked about the pieces.

Did you know that every single actor gets a costume fitting for every single change on stage?  Custom fit outfits for every actor in a stage production is a lot of work.  And when they change a cast member, that new cast member is fitted and has a whole costume set made as well!  The time and energy that goes into that process just seems immense!

And, if you are like me, I thought that the stage actors must be so tired at the end of the night after holding up those really, impossibly large and heavy headpieces.  Well, the costume designers got cleaver with that too.  The cast of The Lion King’s head wear weighs nothing at all!  They used some sort of carbon graphite or something and they are so lightweight that I bet when the actors are dancing and singing, they do not even realize they are on their heads!

Oh, and they custom fit those per actor too!

There is so much more I could tell you!  But the bottom line is that if you are in New York and the New Amsterdam Theater has decided to let people do the tours, please don’t miss it!  And if they don’t, at least take the time to see Mary Poppins there on one of their two stages and get there early to drink in all of the wonderful history!