Up In Arms: Does Your Child Have a Gun?

Up In Arms: Does Your Child Have a Gun?

I do not know why I watch the news.  Lately, I suppose, it is because I need blog topics because I keep hearing stories that get my blood boiling and running for the computer.  Really though, I think I am just more aware of the stories because my kids are getting to that age.

You know… where I have to let them go and trust that they will be OK.

I thought I might be OK with pre-school and elementary school.  That things like guns and drugs would not come into play until maybe high school.  And I may have time to learn how to deal with those issues by then.

But yesterday, a 6 year old boy in a part of Houston took a loaded gun to school where it fell out onto the floor, discharged, and injured him and two classmates. One a 5 year old girl. 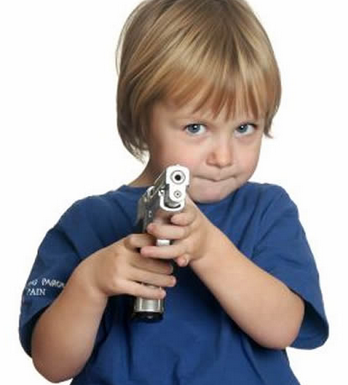 Katie’s age when she will be in school.

Really?  A 6 year old boy has a loaded gun in an elementary school cafeteria?

This is where we are?  This is the protection we are offering our kids?  The kind of protection where a little girls stands in front of news cameras and tells the story about how her friend was shot right next to her?

Look, I am not naive.  I know that the little boy probably saw the gun sitting on a night stand or something and thought it would be cool to bring it to school to show his friends.  And I am sure his parents had no idea the gun was gone much less in their child’s pocket.  Even though they should have.  And that lack of parenting knowledge is a whole other post.  But unless a pet hamster has rabies, I can think of no other item I would rather not see at show and tell.

So as my anger – born from fear – festered last night, growing like  a fungus, I started to wonder… how in the world would I ever know if the kids Katie goes to school with can get their hands on a gun?

I am from the South.  I know a million people who have guns in their homes.  Locked up, in a safe, tucked high away from curious hands.  My neighbors shoot guns on the weekend on their property and then lock them in the gun safe after use.  I even used to have a pistol and a Concealed Handgun Licence for my late nights at the office.

Guns are everywhere here.  It is just in our culture.  And they always have been.  And though I choose not to have one on my home, it is certainly others rights to have them.  That is the law, whether we like it or not.  And will be the law probably through my lifetime.

But I do not recall having to be worried about being shot in school.  Not even in High School where school shootings seem to run rampant these days.  In fact, I can not recall any time in my life where I had to worry about guns around me at all.  I did not walk through metal detectors and have weekly locker checks.  I never had my purse searched or had a clear backpack.  This was just not a worry I grew up with!

I had a cousin who shot himself by accident when he was 15 showing his friend his gun, but he lived in California.  It did not seem that close to me.  And there was the high school crush I had that, while cleaning his gun for a hunting trip, shot himself in the head.  But these were far and few between incidents.  And never happened in a school!

So what is it about today… this day and age, that makes it even a thought process that my Kindergartner could be shot at school? By a classmate at that!  How has it come to this?

This worry should not be entering any parents mind as they send their children off to school.  Private, public, homeschooling co – op, or Sunday school.  It just does not need to be in our conscience!

But what can I really do?  Besides pray?  I can not walk into people’s homes and make them be responsible for their firearms.  I can not go to school with my kids and make sure I am there to jump in front of them and take a bullet that is headed their way.  I can not protect them from every single thing that can kill or harm them every single day. Even if I home school them there is no guarantee that I can protect them from harm.

So I guess all I can do is trust that they don’t go to the school that ends up on the news because of a shooting.  And that they are not in that room or hallway that is the firing range.

And that makes me feel like I can not control anything at all about any of this.

And that has me up in arms.