Underage Drinking: What Would You Do?

Underage Drinking: What Would You Do?

This morning I packed up my girls and headed over to my friends neighborhood pool so that that girls could play in their splash pad.  We had so much fun watching the girls run in and out and play with their friends.

We then went to Taco Bell where Megan taught me that changing a swim diaper soon after getting out of the water is of major importance.  Because I was wrangling three girls and the stuff of three girls, I forgot and she squatted and peed right in the middle of the restaurant.  At lunch time. 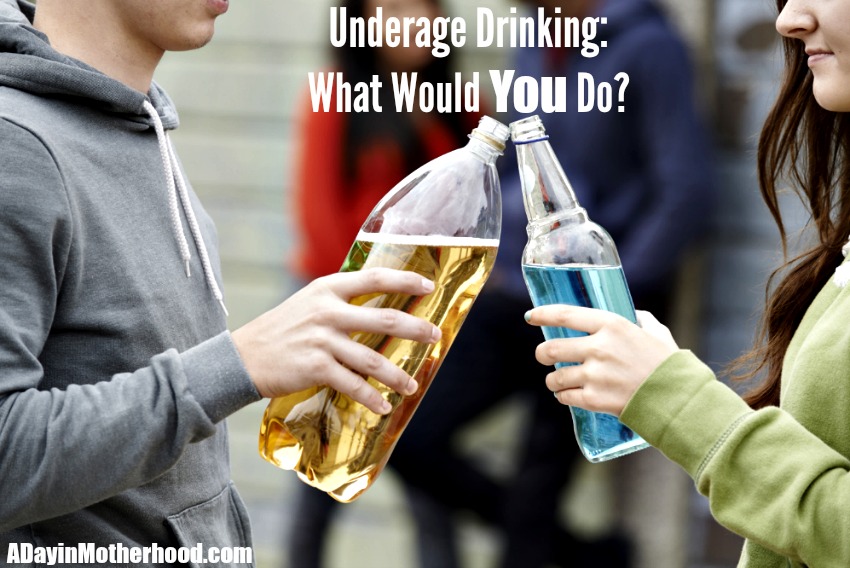 After mopping the floor with the entire pack of napkins, we headed home.

I turned into our neighborhood, yet again happy we moved into a family friendly, private place where my kids could run and play despite the challenging year we have had.

Ahead of me was a boy riding his bike.  He was maybe 12 years old.  I noticed as he rode slowly and kind of zigzaggy that he was controlling the bike with one hand and had something in the other.  From the back it looked like  a puppy.

I love puppies so I looked as I drove by and saw something that was most certainly not a puppy.

In his hand he had a beer!

No, I am not kidding.

He had something over it obviously in an attempt to hide it, but it was a Shiner Boch beer – yellow label clearly seen.

He was not 21, and he had no adult with him that he could be ‘holding” it for, so I was shocked.

Because I am an “it take a village to raise a kid” kind of mom, I slowed immediately to watch what he was doing with a beer at 2pm on a summer day.

He noticed that I slowed down and so did he.  But I did continue to the next Stop sign.    My intention was to roll down my window and ask him why he had a beer and then take it from him, hopefully instilling a little dose of fear to help prevent him from taking another one.

Well, he outsmarted me, and I watched as he nervously passed my passenger side window right as I was rolling down the window, looking back at me every few seconds.

I gunned my gas, u -turned, and headed back down the street he had turned on.  He was no where to be found.

From teenage experience, I assumed he was hiding in between houses, hard to do when the whole neighborhood is acre lots though, or had slipped behind a house that had no fence.

In any event, he had disappeared in a hurry.  And he stayed hidden because I tried to outsmart him and come back around but I never saw him again.

Now I worry that he went and hid somewhere and drank that beer.  Probably not his first one.

I began to wonder, though, would his parents have been upset with me for stopping him and taking the beer from him?  Did I have a right to do that?

I decided yes basing it on my own desire as a parent.  If that were my daughter, I would hope someone, anyone, everyone would stop and take that beer from her, give her a stern talking to, and then come and tell me every detail.

But what if his parents thought I should mind my own business?  What if they had been upset that a stranger tried to step in and discipline, in a way, their son?

My husband thinks it was not my place because it was not even my friends child.  I did not know him at all so I should have let it go.

I asked my neighbor what she thought and she said what I did.  If it were her kid, she would want help in stopping him from drinking, at least, that beer.  And she added that society as a whole does not step in enough with kids and that is why so many are out of control these days.

Because they know that no one will tell or discipline them out of fear of negative reprimand.

What do you think?  Was I right in tracking this boy in a real attempt to take that beer?  Or should I have hit the gas, forgotten what I saw, and just prayed I was wrong and it was really a beer shaped, yellow labeled Coke.

That he was clearly hiding.