It is time to get ready to to rev up your engines and watch the animated hit that every kid (and adult) will love!  TURBO on Blu-Ray Combo pack is coming November 12, 2013! Set your pre-order now or mark your calendars for the release date! 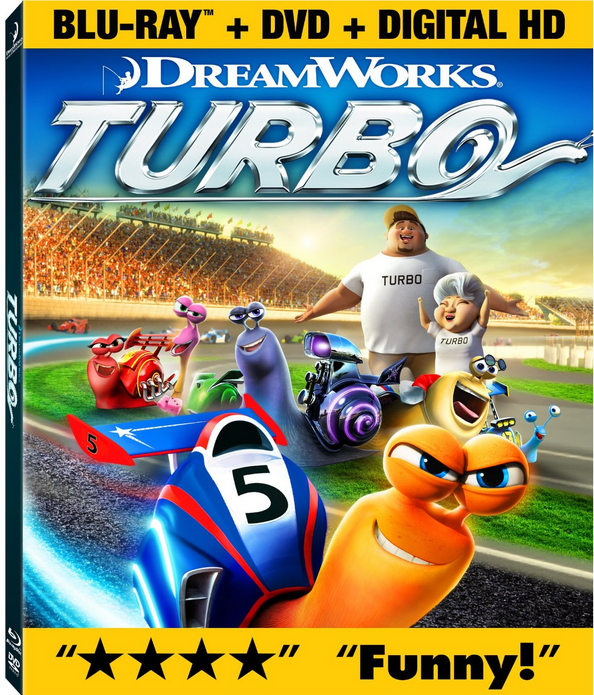 The November 12 Blu-Ray DVD release comes with a ton of bonus features making it an awesome Stocking Stuffer for the Holidays!

Laugh it up with the visually stunning, heartfelt comedy-adventure for fans of all ages this holiday season! “Fresh, fast and funny” (Lou Lumenick, New York Post) and garnering four stars from Shawn Edwards with Fox TV, DreamWorks Animation’s TURBO has been hailed by critics as “pure family fun” (Jeff Craig, Sixty Second Preview) receiving outstanding audience reaction and a coveted “A” CinemaScore.

Check out the awesome stuff you get with this Blu-Ray DVD!

The TURBO Blu-ray + DVD + Digital Copy Deluxe Edition includes the below bonus features and the Feature film in high definition.

• Meet Tito – Director David Soren provides an introduction for a scene that was deleted from the film.

• The Race – Director David Soren provides an introduction for a storyboard sequence that eventually made it into the film. Viewers can even see picture-in-picture comparison to the final cut.

• Shell Creator – Create your own shell from select-able parts

• Be An Artist! – Dave Burgess, Head of Character Animation on the film, shows the audience how to draw: Turbo, Whiplash, Skidmark, Burn, Smooth Move, White Shadow, Chet and Customizable Racers.

• Team Turbo: Tricked Out – See Turbo and all the rest of the snail crew in a break- down of the cool components that make up each of their shells.

So much is offered in this package for all to enjoy!  ‘

How would you like to have a copy for the stocking or under the tree?