**I am a mom ambassador for Denny’s Diners. All opinions are my own.**

Denny’s and Stoopid Buddy Stoodios, the studio behind “Robot Chicken™,” have joined forces to create a new animated web series, “The Grand Slams.” Starring a delicious cast of characters – Egg, Pancake, Sausage and Bacon – based on the brand’s most iconic dish, The Grand Slam™, the series follows the diner gang on their everyday adventures at the booth and beyond.

An exclusive trailer, available today at TheGrandSlams.com, introduces the cast and provides a preview of the upcoming series, launching Oct. 15. The first episode kicks-off with a diner debate on the merits of dessert vs. breakfast, resulting in a savory standoff where Bacon and Sausage take on sweet and tasty Pancake. Additional episodes will be released now through January, following the cast’s hilarious escapades through Halloween, a Bold Coffee emergency and much, much more.

Check out the trailer – it is hysterical! 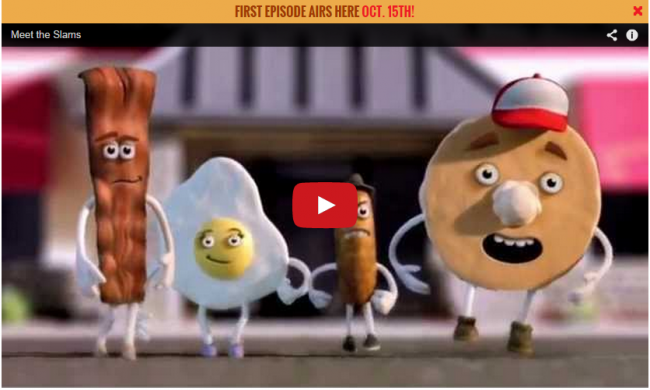 I marked my calendar for October 15, 2014 and can not wait to share these famous Denny’s The Grand Slam characters with my kids!  Who will you share them with?