The Day My Daughter Took a Knife to School

The Day My Daughter Took a Knife to School

I was feeling good. Great, actually. On my way home from Crossfit, work under control for the day, bills getting paid, taxes done, want for nothing good. The sun was shining, the windows were down and my radio was blaring. So when the phone rang, it never occurred to me that the conversation I was about to have would even be possible on such a good day. This was the day my daughter took a knife to school. 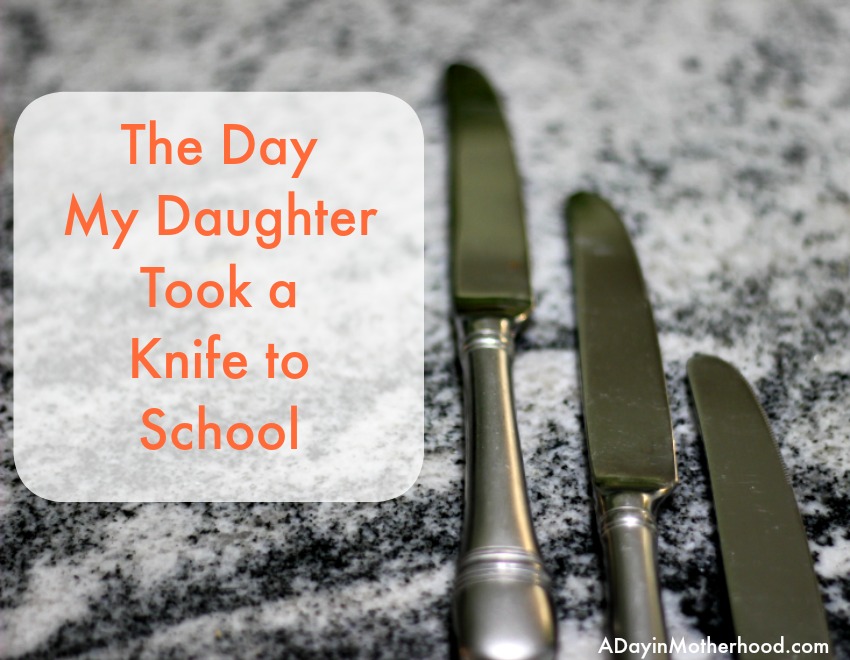 Every parent knows that feeling when they see the name of their child’s school pop up on the phone. The first thought is that someone is sick and you start calculating how long it will take to get your ill feeling munchkin into your arms so that you can care them back to health. The second thought was that maybe there was an accident on the playground. I get those all the time. Katie fell off the slide and skinned her knee, Megan bonked heads with a  kid while playing tag, Sarah fell off the monkey bars and landed wrong.

These calls I can handle. These calls I am prepared for. In fact, in the 5 years that my kids have been in school, only once have I gotten a call about behavior and it turned out it was directly related to my kid not getting enough sleep at their dads the weekend before. Tired kids make for behavior issues, in my experience.

So when the Vice Principal – and she NEVER calls me, like EVER – told me that she needed to talk to me about my 1st grader, I thought it might actually be that she broke a bone or something. Never, in a million, gagillion years, did I ever expect to hear the words, ‘She brought a knife on the bus.’

Do you ever have that wind knocked out of you, stomach falling, can’t catch your breath reaction to news? You know, the one where the world starts spinning and all that comes out is a sharp inhale with your mouth gaping open?

Yes, that is how I reacted to that sentence. In fact, as the vice principal talked, I, literally, heard nothing. My ears were ringing, my heart was pounding and I was imagining the most horrible images possible.

Somewhere in the fog of my reaction, I heard the details. My daughter, my sweet little 6 year old that has never been in trouble a day in her life in school, managed to grab a butter knife without me seeing it and put it in her backpack. She pulled it out on the bus to show a friend who had asked her to bring it to prove she is allowed to use butter knives at home and, before they got from her stop to the next one not 100 yards away, the bus driver saw it and took it from her. But, as required, the bus driver had to report the incident to the school so they had to have a talk with her to explain the rules of the bus. My daughter was very honest about having it, never tried to hide it, told her reasons for bringing it and said she was sorry even though she did not know it was not allowed. The vice principal was very proud that she handled it like a big girl and did not try to excuse bringing it or blame anyone else. All was good, as far as they were concerned, except they did have to write her up and put it in her file.

Mortified. I was mortified.

By the time we were done with the conversation, I had apologized a million times, promised I would reinforce the message at home and managed to hang up without wrecking my car. A huge feat, I might add. And then I had to wrap my mind around what just happened.

The berating started with me. HOW did my child manage to get a butter knife out of the drawer and into her backpack without me noticing? I am always in the kitchen in the morning, barking orders, telling the kids to hurry up and popping waffles in an effort to get some food in them before school. I rarely leave my command post. Unless a shoe can not be found. Unless someone needs help with their hair. Unless I need to pee.

But then, how did I miss it when I checked her backpack to make sure her folder was in it? I mean, sure, she had library books, a lunch pail with her snack in it, a jacket stuffed inside and her favorite American Girl Magazine, but still. How did I miss a big, shiny, silver knife?

Immediately feeling the weight on my shoulders for missing it, I could not find a way to talk myself into believing that this was not my fault. It is MY job to make sure my kids are not breaking any rules. MY job… no one else’s. And I failed. The rest of the day I felt the weight of knifegate.

It was not until gymnastics that evening when  I shared the story with a mom and dad also banished to the metal bleachers while our children flipped and jumped around in the gym that some humor was brought to the subject. Both laughed and said, kids will be kids and that I should not worry too much about it. That curiosity was the motive and that she was not trying to hurt anyone. I felt better, even laughing at the jokes about raising a mass butterer – come on, THAT is funny!!,  but still had to do some soul searching to figure out how to deal with it.

In the end, Megan told me the whole story, eyes looking at me, no excuses, no passing off the blame and said she just did not know better. She did not want to tell me which friend asked her to bring it but it does not really matter. I explained that making good decisions also means telling friends no when they want you to do something that might not be OK. I had her write apology notes to the bus driver and the vice principal and she delivered them this morning and gave hugs to both.

As for me, I learned that just because I think I have it all under control, some things are going to slip by me. So I take this incident as a HUGE lesson to be more diligent, more aware and more broad minded about my kids and what issues they may run into as they grow up.

So the day my daughter took a knife to school ended up being a lesson for all of us. At the fear of being screamed at by moms online who will totally blame me, I had to share. Maybe this will remind all of us to be more aware of things that may slip by in the rush of crazy in the mornings. It sure has hit home for me.