Teen Dating – What Age Is The Right Age?

Teen Dating – What Age Is The Right Age?

“But mooom, he looked so HOT!’ is the same as nails on a chalkboard to me. I don’t want to hear that and I don’t want to face this. But it is going to happen. My daughters are going to come to me and ask about dating. Every parent faces it and we can’t avoid it. They will look up at me with those sparkly eyes and beg. They will plead. They will do every thing in their power to convince me that they are different and that there is nothing to fear. Teen dating is coming and I can feel it in my gut….sneaking around the corner of life like a serpent ready to strike. Despite the fact that I have told them they can not date until they are 30, the reality is that it can not be avoided with my overly protective motherhood style.

So, admitting that it will happen…what do I do about it? What is the right age for teen dating? 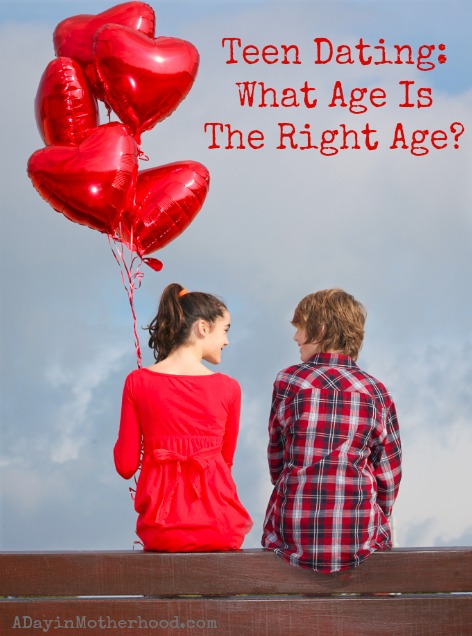 My initial answer to this was to panic and throw things. But that won’t work to calm my fears at all. So, I have decided to educate myself a little.

One of the best ways to find answers is to look at what the experts say, right?

Upon digging in, it appears that every expert has a slightly different answer on the subject of teen dating. Few of them agree on much and they all kind of go rogue with their answers.

The general consensus seems to be that dating too young (before 16) is harmful because kids at this age are not mature enough to understand the difficulties involved nor are they at the age of consent. Starting to date too late can cause the kid to go nuts when they are finally “set free” be it at college or after they move out. The age most often mentioned in association with dating by experts seems to be around 16 and I guess that makes sense. I was supposed to be 16 but maybe started a little too early, begging my parents because I was so ‘in love’. Yea… not good.

Where this gets complicated is teen dating that masquerades as something else. They have school dances all the time that are basically just chances for the kids to “date” without actually “dating” outside. These dances begin way before the age of 16. Do you make an exception for these dances? If so, aren’t you still opening your kid up to the emotions, complications and other things that the doctors say they can’t handle that young?

I like to think that each parent would make their own choices on the subject and that there is not a “dating age” to refer to. I have known many 16 year olds that were less mature and other 16 year olds that run circles around kids much older as far as responsibility.

All of this leads me to think that maybe the answer lies with parents themselves….fancy that!

Each individual parent needs to look at their own child and make a decision based on their maturity level, engagement level, emotional advancement and yes….age. I don’t think we can afford to pigeon hole every single kid into an age for teen dating any more than we can pigeon hole them into an age to be left alone.

Every kid is different. I already see signs in my own kids that show differences in how I might be with their dating lives.  I expect that to change many times over the years, but it should be me paying attention and making that call.

What do you all think about teen dating? Do you have a particular age you are looking to?