My three children were not born on September 11, 2001.  They were not even conceived or though of.  In fact, I had not even met their father.  That would be a year or so away.

I was a stockbroker in a large firm on my phone with the trading desk, placing an order, calculating my commission, wondering if it was enough to buy that new Kate Spade purse I wanted.  The trader on Wall Street took my order and then called back a few minutes later.  “There is some craziness here.  Something has hit the World Trade Center building.” 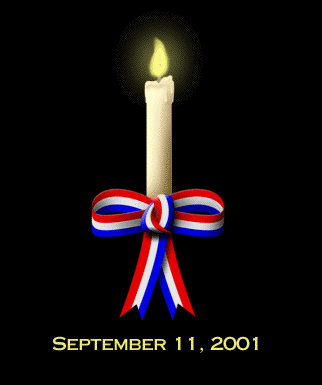 Having just been to New York on August 11, 2001, I had fresh in my mind the atmosphere of one of the most dynamic cities on this planet.  The smells, the sounds, the hearty personalities of the people.  Our companies offices were right by the World Trade Center and I had pictures of me in front of them on a clear, sunny, New York day.

I heard something come from my Broker in his office.

I did not know who that was.  Had never heard of them and had no clue that it was a terrorist group and that this day in American history would go down as one of the worse ever seen.

As the planes hit, the office closed and the confusion mounted.  My world, along with every single American or American supporter in this world, changed forever.

Eighteen years later, on the anniversary of the terror attacks on America and it’s people, I take my children to school.  On the drive there, listening to them talk about playing on the playground – or the gym, as Katie pointed out – coloring and sharing with their friends, I wondered how it was that something so defining in my life would mean very little to them in reality.

I am sure, especially living with me, that they will know what happened on this fateful day.  But, as I did with the Kennedy assassination, they will drown me out and never really understand the importance of the events and the rebuilding that followed.

I can tell them of the horror, the fear, the hopelessness as plane after plane attacked what we all hold so dear but did not realize we cared about until it was no more.  I can express that for a week straight, tears readily appeared and fell from my eyes as I glued myself to the television, the internet and the paper trying to find a reason, a comfort and a security that was so lacking on those days.  I can say “I was just there!” and watch as the impact I expect those words to have on them fall, shatter and land unabsorbed.

But even though they may never fully understand how the world changed that day, I will work to help them learn what American pride is all about.  I will hail the Hero’s on those flights and those on the ground.  The police, firefighters, military and civilians that risked everything to save and preserve what is infinitely ours… freedom.

I will tell them that millions banded together to raise money, hope, and prayer for the victims and their families.  That American flags flew on every house, every business, were on every bumper, every bus, every thing.  That you could walk past a stranger and feel they were a friend, a confidant, a solace.

I will tell them that we prevailed, because the attacks restored our pride and admiration for our country.

But I know that it will still not be what it is to me to them.  I can show them the pictures from the book I have of 9/11, I can show them the photos that I took the month before and the month after while in New York.  I can let my tears fall, let my heart bleed, as if it happened yesterday.  I can tell them to this day, every time I see an airplane in the sky, my heart jumps a little and prays it is safe and secure.

But just as the American flags faded and were eventually removed from every corner of every street, so will my memories and my descriptions.  Thus lessening my ability to make it real.  To make it important.  To make it theirs.

But it will always be mine.