And it can all fall apart on a traffic jammed night in New York City and cause a barrage of bloggers to run, full speed, in formal attire and heels, Pashminas dragging behind and purses dangling from wrists, to an event that will not wait on them to get there!

I know this, because I speak from experience.

And so do many of my fellow bloggers that were in New York City this weekend for the Red Carpet Premier of War Horse!

Me, Ready for the Premiere

It was the reason we were there.  The premier.  Formal attire required, best behavior a must, and tardiness to the lobby was frowned upon.  So, on time, 20 beautifully and carefully dressed women posed for photos in front of the white chocolate Christmas tree, anxiously talked about the night ahead and secretly felt blessed that they were there.

One of our two vans arrived to take us less than ten blocks to the theater for the premier.  We crammed in, fitting 14 into the only van, six bloggers and our escort standing in front of the Essex Hotel waiting on the second van.

It arrived late and we headed to the show, sure to make it in 10 minutes.  But this is New York City on a Saturday night.  Full of pedestrians, insane life threatening Taxi drivers, and obstacles like petty cabs and bicycles that have no fear for cars bearing down on them.  It took 20 minutes to get less than a mile to turn and try to get around the block to go back towards the event.

We got a text from the host in the other van telling us that they were already at the theater and we needed to get our driver to u-turn. Our driver would not and insisted that if we just went a few more blocks – away from the premier – we’d be able to turn and be there in no time.

After he got into a yelling match with a street cop, refused to listen to us try to help him, and we sat – virtually helpless – getting farther and farther from where we needed to be, we decided to bail on the van and take a shot at getting there on foot!

In formal dresses, high heels, through sidewalk traffic, in New York City, on a Saturday night.

We hit the pavement, forgot everything except that we did not do all of this just to miss the premier, and ran our hearts out.  In any direction we could.  We lost Jeana from Deals4Dummies.com and Crystal with SimplyBeingMommy.com on the first turn.

There was no time to go back.  We had about 20 blocks to cover in record time!

Emily, Sunny and Louise, from CleverHousewife.com, Babble, and MomStart.com respectively, spotted a petty cab (a bicycle cab) and hopped in, praying this very expensive alternative would get them there in time!  Me, Caryn (RockinMama.net), Lolli (BetterinBulk.net), Tricia (@NightOwlMama), Sara (BudgetSavvyDiva.com), Liz (ANutinANutshell.com) and more kept running.  We tried to stay together but it was hard.

Eventually, me and Lolli pushed through some pedestrians and ended up alone, the others behind us, running as fast as we could. The theme from Chariots of Fire

simultaneously played in my head as I ran around tourists stopped in the middle of the sidewalks to look at maps and darted around locals that were also darting around tourists.

We zig zagged, up 5th Street, down 54th, cross at the light on 6th – careful not to get your heels caught in the metal grates in the sidewalk – up 56th and over to 8th….  Columbus Cirle is ahead – we need to get to the other side without having to go around.  Quick, hang a sharp left and head down 58th!  BROADWAY!!

I pray that my pearl earrings are still in and that my Calvin Klein shoes hold up a few more blocks!  Sweat is beading on my forehead and I can hear my carefully straightened hair kinking and frizzing in my ears as I run.

We make it…  Broadway and 62nd Street!  We can see the white tent, the press and the Red Carpet within grasp.  I look at my phone and we have 2 minutes to spare as we come upon Crystal on the corner.

Our host, Marshall, told us later that he looked to the left and saw one group of bloggers running at him, one coming at him from the right and yet another group coming from across the street.  As we arrived he told us we were team three in the Amazing Race, Blogger Style and to go, go, go get our credentials and walk the carpet.

Connie Ott, MiscFnds4U.com, had opted to stay in the van and not run, and made it to the theater 15 minutes after we did. 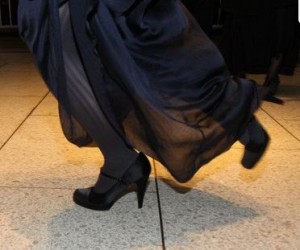 Running in Heels in The City (Sunny's Heels)

I was sweating, my feet hurt from running 20 blocks full speed, and I know my hair resembled a bird’s nest, but I didn’t care.  I was on the same Red Carpet Steven Spielberg had walked, staring back at a million camera’s – their flashes oddly still {they must not have gotten the memo that I was back in town} – and feeling like the most beautiful woman in the world!

Because even though it was a crazy way to do it, it was a complete blast running in heels in the city and I’ll always remember that adventure and who I shared it with as long as I live!

**Photography courtesy of Louise from MomStart.com.**