Red Coffee Cups, OCD Sweatshirts and Other Things We Fill Our Time With

Red Coffee Cups, OCD Sweatshirts and Other Things We Fill Our Time With

The world, literally, baffles me. The things we worry about. The things we get upset about. The things we use to fill our days because we just don’t have enough to do are simply amazing. Back from a relaxing cruise in the Caribbean, I open Facebook to see post after post about a red cup. A red cup. One that used to house sleighs and ornaments and sparkle is now plain. I actually like it. To me, bright red with a green logo is Christmas cheer. It is Christmas colors, after all. 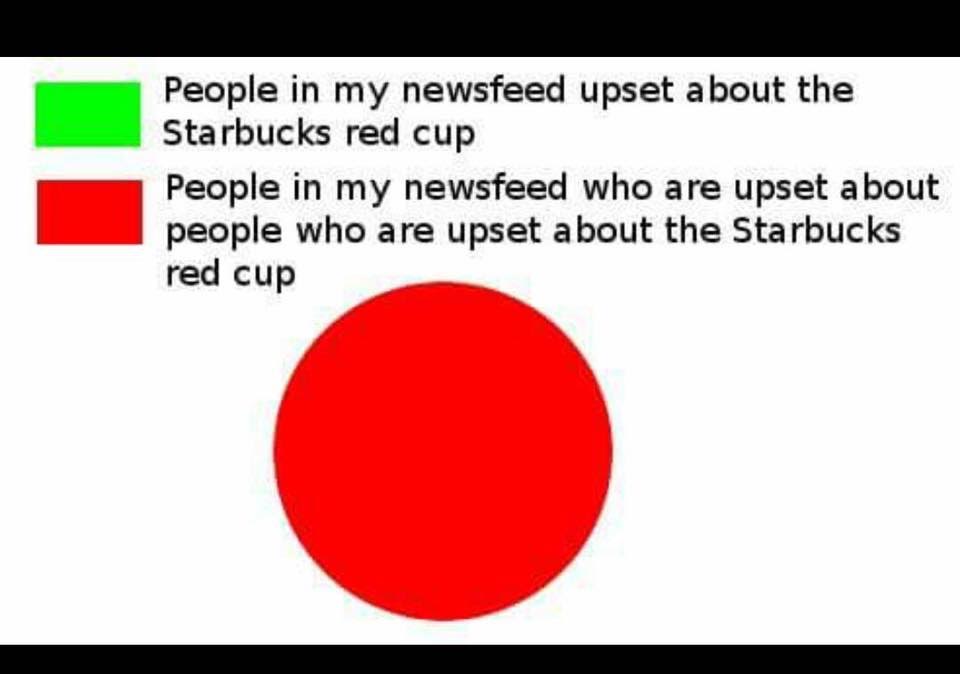 The posts were non-stop. Meme’s of the cup, rants back and forth, debates fueled by what was actually IN the coffee cup. What I never saw were posts from people actually opposed to the coffee cup design. No ‘This is anti-Christian’, ‘who took away our Christmas cheer coffee’ and any other rhetoric opposing the cups.

Maybe I don’t ‘hang’ in that crowd online but, with 280,000+ social media fans, you would think I would see at least ONE post opposing the cups. But no, I never saw one. Maybe the posts about how ridiculous this argument was were just too overwhelming to let the real arguers in.

On the heels of #CoffeeCupGate2015 came #SweatshirtGate2015. Now listen. No illness should ever be made fun of. Like, ever. But going after a sweater at Target is just… a waste of time. I have seen OCD images everywhere over the years and never anyone having a fit over them. So, I searched my social media accounts, again, for people deeply offended by the sweatshirt.

Maybe the people that got the genders removed from the toy area at the store are on a new crusade… I don’t know. But I bet if people really shopped their stores, they would find more than a sweatshirt that they disagree with. Have you SEEN the tween skin tight pants and crop tops?

As a terminal people pleaser, that fact is hard to accept for me. But it is true. But some of the ’causes’ that are gone after on social media are almost….  laughable. Coffee cups, sweatshirts and other things I couldn’t care less about decorate my news feed with passion and a real drive to make a change.

If only that same passion and drive were geared towards kids who need homes, pet abusers and those who really aim to make our lives more difficult.

Now back to my newsfeed. Where Jessa Seewald has named her baby and Gwen Stafani and Blake Shelton’s relationship is debated by the minute…. (guilty!!)