To the Parents Who Don’t Watch their Kids in Public

To the Parents Who Don’t Watch their Kids in Public

About once a week, a dear friend and I take our kids out to dinner together. We like to take the kids to a place where they can run around a little, play a little and just be kids. There is one place in our town that we love. The parents can sit under cover and watch their kids play in a large open area. They absolutely love it! If you follow me on Facebook, you see me there a lot. It is fenced in and the food is great too!

Last night I loaded up my girls and headed out. Unfortunately, upon getting there, I find out that they are in the midst of a bee infestation. Going to plan B, we head to another place with a play area, though much more sandy. Already planning for it to be a ‘hose them off in the driveway’ kind of evening, we released the kids to go climb the sand hills and play with abandon. 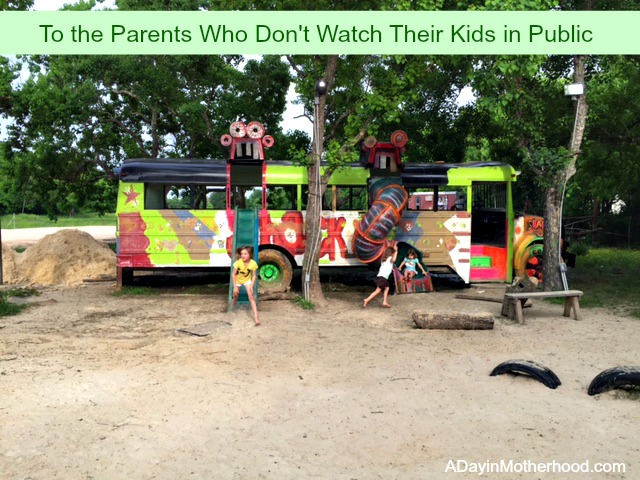 All was well. We were some of the first ones there, got a great table that gave us full view of our kids and the play area and ordered some appetizers.

About thirty minutes into relaxing, a little boy about 4 or 5 walked up to the large, oscillating fan behind my friend and attempted to put his fingers in to the fan. It was on and not child proof. I fully expected a parent to rush over and remove him from the danger. Not seeing a parent around, and being of the mindset that I would rather be yelled at by an adult than call 911 for a child with an injury, I told him in my mommy voice not to touch it.

He looked at me, thought about it and tried again. A little firmer, I told him not to do it. Still, no parent around at all. I think my voice stopped him because he turned around and walked into the play area.

Counting heads to make sure all of my kids were OK, and not throwing sand, I went back to chatting with my friend. Out of the corner of my eye, I saw the same little boy walk up to a table not far from me. There sat four adults, beers in hand, talking to each other. I went back to my dinner and figured he would not be back to the fan.

A little while later I checked on my kids again and noticed the little boy in the play area with a 5 foot bamboo stick he had found. Now, this thing was at least three times taller than he was. He seemed to be trying to draw in the sand with it. My mom radar went up and I looked over at the table that held his parents. All four adults were still deep in conversation. I watched for a while to see if one would look up and notice the boy with the stick. I must have watched for over 5 minutes while my friend kept an eye on our kids. Not one adult looked up once.

Next thing I know, my little one is running towards me, crying and holding her head. Through her tears I found out the little boy had hit her in the head with the stick. All the tables around me turned around to look at my screaming daughter. But the table that held his parents did not notice at all, and they were not that far away.

Once I calmed her down, I marched out to the play area and told the little boy – who had now climbed with the stick to the top of a sand hill and was swinging it around, barely missing kids heads and faces – and told him to give me the stick. He looked at me like I was crazy. I told him again and he ignored me. So I marched half way up the hill and took it from him. Fully expecting one of his parents to come up behind me and take over, I turned and gave their table a direct stare. Nothing… they did not even look up.

I took the stick and tossed it far away from the play area where he could not retrieve it. By the time I got back to the table, my girls were there eating and told me that the little boy was mean and taking things from kids, throwing sand and just being ‘super mean mommy’.

A few minutes later, I heard, ‘NO, stop that!! Put it down!’ It was coming from a dad that was sitting with his wife at the table behind me. I looked up and the same little boy had found another, smaller stick and a sand bucket and was walking towards a little girl, stick in the air, about to clock her over the head with it. The dad was out there before he could swing and took the stick from the boy.

Again, everyone else looked up at the scene but no parent from that table looked or paid any attention. And this man was LOUD!

After that incident, the server came over and talked to us. She said she had MANY tables complaining about the little boy and would alert the manager to the situation. Next thing we know, the manager is at the table telling the parents that they need to watch and control their child.

I watched as the parents seemed truly stunned that this little boy had affected so many of the restaurants patrons. I mean, they really looked shocked! Which shocked me!

After the manager warning, I noticed that the dad either had the child with him or was in the play area with him. So I suppose I can chalk this experience up to just ‘I finally have a night out with friends’ oblivion?

But honestly, I am a little peeved at the parents. I know that I should have probably gone to them when the little boy hit my daughter on the head. So I take some of the blame for not putting a stop to it earlier.

However, if you take your child to a place where other children are and never once turn around to see where they are or what they are up to, aren’t you sort of falling down on your job? I mean, forget that he was hurting other kids. What if HE were hurt or someone came along out of the back parking lot and took him?  How would you even know?

So, I ask, please – to the parents who don’t watch their kids in public… please stop it! If you want to have a night out with adults, hire a sitter. We all need those. But if you go to a family place with other kids and ignore them and they cause problems with other patrons, so many things can go wrong.

What do you think? Do you think I handled things incorrectly? How do you react to the oblivious parent at a restaurant?