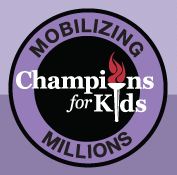 I told you a week or so ago that I wanted to get my kids involved with giving back this holiday season with Champions for Kids and Disney.  And I told you about the Champions for Kids Disney Stocking Stuffer Celebration where they asked people to stuff stockings and give them out to kids that needed that extra holiday cheer.

As a former foster child, I really wanted to find a place that housed kids that were either parentless or had parents that could not take care of them properly.  Sort of a modern day orphanage.  There is a place down the road and I did manage to find the number.  Originally, I was told I could come in and hand out stockings and take photos to show you guys as long as I did not show the children’s faces.  But when I called later to get a time to drop them off, understandably, they said they could allow me to drop the stockings but I might not even see any kids.  And photographs of any part of the property or any children was forbidden.

I get the reasoning and I respect it.  These kids are well protected from harm and I appreciate that.  All that matters to me and my kids, is that these innocent victims of unfortunate circumstances get a little holiday cheer that is unexpected and a little special to them!

So I headed to Walmart in a mission to stuff as many stockings as I could possibly afford with all sorts of Disney goodies I could find!  I had decided to fill at least four stockings, two for girls, two for boys, with things that were essential and things that were fun!

Luckily, there is no shortage of Disney items at Walmart so my desire to stick with a Disney theme was very easy.  In fact, there was so much stuff that I wished that I had the funds and stockings the size of a car to stuff full for these kids.  Vowing to do better next year, I tried to stick with things that would fit into the fuzzy red stockings I had leftover at home (I buy extra every year to stuff goodies in for my neighbors).  I even had a Disney one waiting for me to find some great stuff for!

See my entire shop below:

Just in case I found some other ones I liked though, I went to the Christmas center at Walmart and look at what they had.  I found the cutest little stockings that I thought I would put some Disney toothbrushes and toothpaste in and then put inside of the larger stockings but as I grabbed all of my other goodies, I thought there might not be room!

So around I went, finding Disney character stickers, coloring books, fun pencil erasers, little Cars 2 mini cars and more.  Plus, I found  the essential Disney character toothpaste and toothbrushes that I really wanted to include.  When you share a home with 50 other kids it is hard to have something as simple as your favorite Dinsey Princess on your toothbrush!  I wanted these little children that got these stockings to have that simple little happiness!

Silly, I know… but it’s what I wanted.

But one of my favorite parts of the stocking are the miniature Lion King Characters that are new on shelves now!  They fit perfectly and can fit in a pocket as a reminder that there are people who care even if you can not see our face!

Loaded down and a little over budget – I didn’t care – I checked out and brought my goodies home.  And then I told my kids that we were going to stuff some stockings for some children that did not have as much as we did.  All three of them happily lined up and eagerly stuffed the stockings.  They even tried to guess the names of the kids that these were going to.  It warmed my heart to know that the stockings were being stuffed for children with childhood exuberance! And if I asked my two older daughters what we were doing, they eagerly told me, as you can see below:

We had a box of stickers with Cars 2 and Tinkerbell that would not fit in the stockings.  So, we wrapped those separately and will just hand them over.  Maybe the home will choose to hand out 8 little packages instead of 4 but if not, its just a little something extra to go with the stockings.

As I load up my kids tomorrow – that is when the home can take them – and drive them less than 5 miles from their safe, crammed full of toys in their own rooms, hugs and kisses abundant home, to a place where kids are loved and taken care of but, for whatever reason, are not with their families, I am sure my heart will have mixed feelings.  I’ll wish I had done more but so appreciate that I could do what I did.  And though I won’t be able to see the children receiving the stockings, I’ll know in my former foster kid heart that we have made their day, their week, even their month.  But it will be hard knowing that I could not do one for all of the children.

I love Champions for Kids and I love what they are doing.  And I love that Disney partnered with them in this Stocking Stuffer campaign.  And I love that I got to participate and that my kids got to as well.  Even if they don’t “get it”, at least they’ll remember that one night they put a bunch of their favorite toys in a stocking and the next day, they dropped it at a door.  And from that door it made a child smile.

LIKE Champions for Kids on Facebook to see all of the updates on those making a difference this Holiday Season and all year round and FOLLOW them on Twitter @ChampionsforKids and the hashtag #CFKDisney for updates as well!

Thank you for taking the time to read and learn about this amazing campaign for kids!