*I traveled to Tyson Headquarters as an invited guest. All opinions are my own and no content was required in exchange for the trip. The post was not reviewed prior to posting.**

Last week I got to do something that I was seriously hesitant about. But I am so glad I did it and came out with a knowledge I think few laypersons get to have. I got to visit a farm where 300,000 chickens are raised by a mom and pop business for the benefit of Tyson Foods. I also got to tour their state of the art Safety Lab, walk through a Cornish Hen factory and ask any question I wanted without worry that something would be off limits. In fact, the depth of details that they allowed me and two other bloggers to get into was truly impressive. If you know me at all, I was not shy. To help me aid in getting to the absolute truth about Tyson Foods, large corporations as a whole and the safety of the food that we put on our tables, I asked readers to ask questions too. 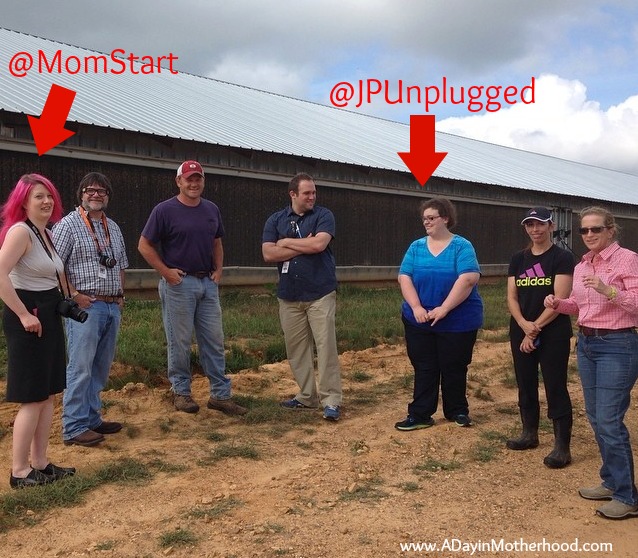 Time after time I drilled everyone from Shannon and Melissa Fancher, the farmers,  to BJ Bench in the Tyson Food Safety Lab to anyone who would listen about the treatment of the animals, any hormones or antibiotics added to any part of the process to their stance on GMO’s and any other buzzword I could think of. Time after time my questions were not only answered, but evidence from articles not in house and more were given to expose the real truth. 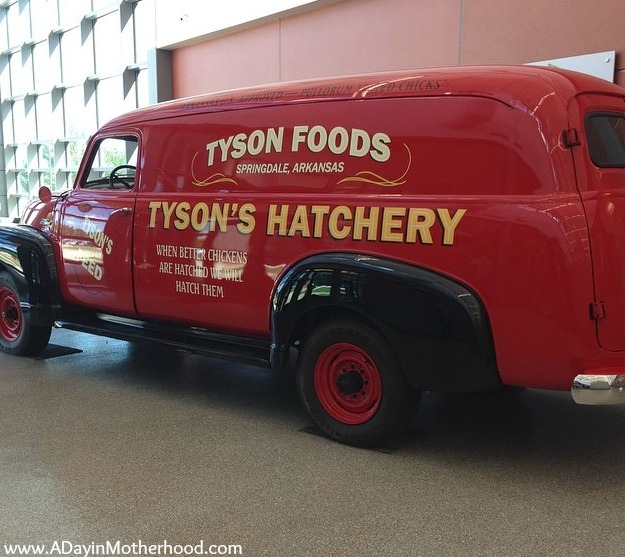 So, I thought I would share with your the top 5 myths about the chicken industry that was debunked by real people, real evidence and real conversation on my trip.

No Chicken in the United States in Injected with Hormones

In the 1970’s, it became ILLEGAL to add hormones to any part of the chicken process. In fact, it is now so regulated and the process of hatching and raising chickens so monitored and open to the USDA and food safety groups that there is virtually no way for hormones to get into any of the stock. The Food Safety Lab at Tyson is so state of the art and so sensitive to anything unnatural in foods that other companies, competitors even, use their labs to test their own foods for bacteria, hormones and more. So rest assured. The ‘hormones’ buzzword, at least in the chicken industry is just that. A result of not enough education about how mass foods are raised and produced and brought to market for us to enjoy.

They Do NOT Regularly Give Chickens Antibiotics 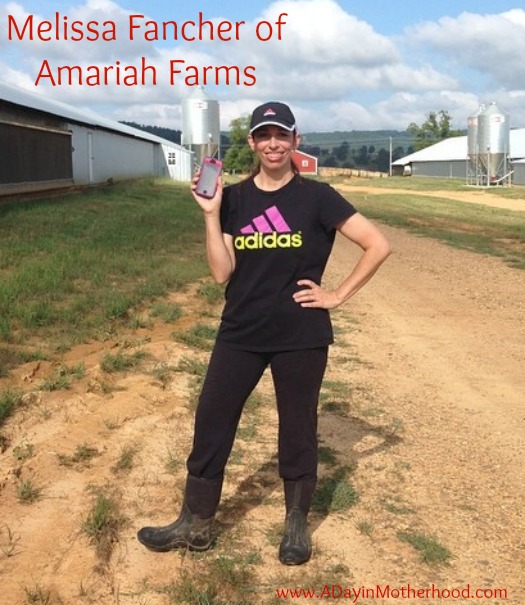 I asked Melissa Fancher flat out about antibiotics in the chicken industry. Their family owned Amariah Farms is the love and labor of her, her husband Shannon and their three daughters. One other person works on this farm which spams 164 acres in beautiful, majestic Springdale, AR. She is a college education, animal health veterinarian and he is a college educated, raised on an operating farm, lover of family. Both worked at Tyson Foods for 18 years before taking a break and then coming back to Tyson Foods to start their farm 3 years ago.

I made eye contact with Melissa and flat out asked her about antibiotics. She did not flinch, she did not stutter, she simply stated the facts. Because the birds on their farms are only there for about 52 days, they do not have time to need antibiotics. At 52 days they are at the size that Tyson Foods wants and they are taken from the farm to be processed. She did say that if she ever had to administer antibiotics – which she had not – the birds would be separated and, just as it leaves the human body, the bird would not be processed until the antibiotic were totally out of their blood stream. So it is highly unlikely any chicken you buy ever had antibiotics anywhere near it and, if that rarity happens, it is gone before it even goes to the factory.

Read more about Antibiotics in the chicken industry. 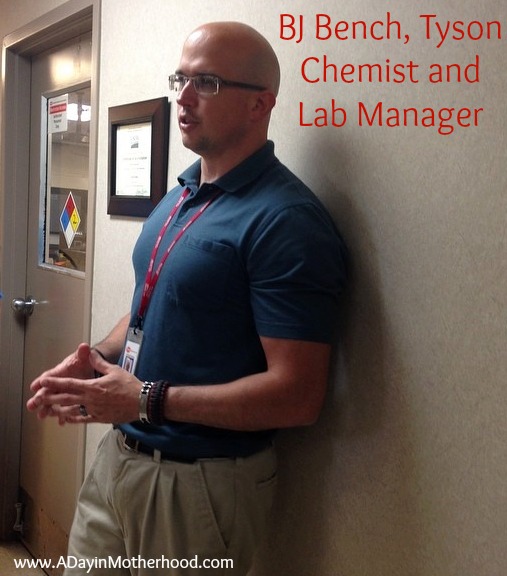 As a general knowledge of genetically ‘altered’ things, I was really interested in this. People have an issue with the fact that animals are ‘genetically’ altered to be larger or produce a more consumer friendly product. The truth is, most things are genetically altered. We breed certain dogs together to get Cockapoodles, breed plants together to get 80 types of lettuce and even breed with each other to create the kids we have that are unique to us. The same is done to chickens. No hormones or chemicals are introduced to make a chicken grow larger. They simple breed two together that produce the offspring that are needed to provide what the consumer wants. In America, we want larger breasts. In Asia, they want thicker thighs. None of it is out of nature or anything new to anyone who understand that mixed genes provides different offspring. It made total sense to me and I, personally, saw nothing wrong with it at all.

Read about GMO’s and what they really are on the Tyson Foods informational page. 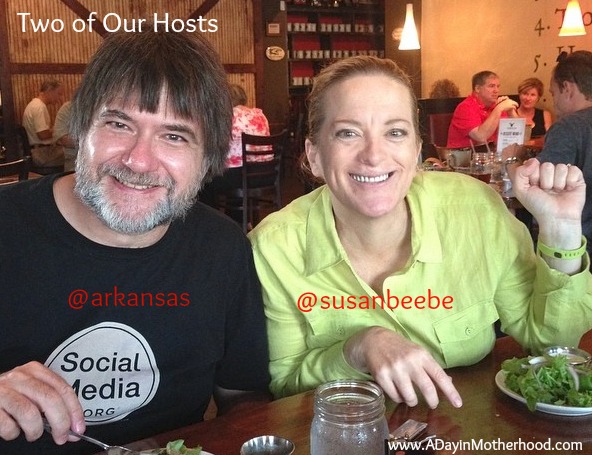 Family farms may be suffering because it is hard work and being a farmer is a 24/7, 365 job. It is true labor all day, every day. But Tyson Foods relies on family farms only for their stock. There are no ‘factory’ farms that they have any relationship with and my trip to the Fancher farm was proof. This is a family that decided to go into raising chickens because they wanted to be home, as a family, without dad having to be gone 12 hours a day working and sitting in traffic. They are a family unit living a lifestyle that they see as the most beneficial to their family.  It is hard work and they do have their days, but overall, working on this farm has been a wonderful thing for their family. 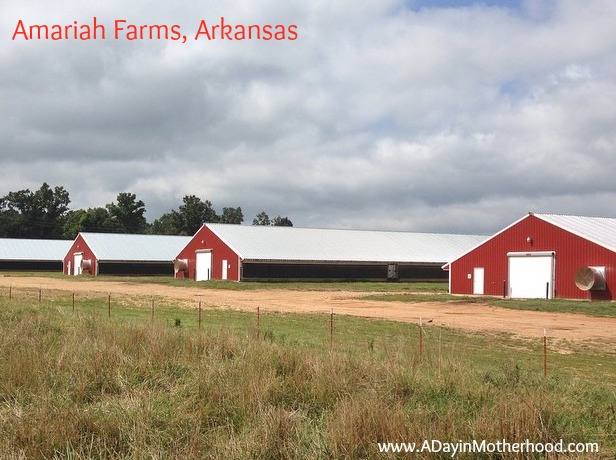 About 4- 6 times a year, Tyson Foods shows up with their chicks. They release the 300,000 chicks into air conditioned, automated, technologically advanced houses that span the length of a few football fields. I believe they have 8 or 10 houses on their land and each one is built for the comfort of the chickens. In fact, Tyson comes out to make sure they are taking the best care of the stock as possible.

If the farmer needs anything or has an issue, Tyson calls a meeting with them and the farmer to work it out. Melissa Fancher described how easy it actually is to work with this ‘corporation’.

The feed, which was developed of the best ingredients and tested in Tyson’s labs, is provided. The Fancher’s check the chickens, who run around totally free, sprinklers misting them every little while (which they LOVE – you should have heard them squawk and flap around), in these large houses, are fed on a schedule, watered on a schedule and have free reign to roam and be as free as you and me. They get a 2-3 week break between flocks to rest, clean up and get ready for the new chicks.

The Chickens are Raised in a LARGE, Open, Safe Environment

The ‘cage-free’ buzzword is huge right now. And I can understand it from an egg laying hen aspect. But chickens raised for food never get to egg laying age and they have all of the freedom to roam as a ‘free range’ one without the dangers.

They are in a house, as opposed to in the open, to protect them from predators, the weather (it hails a lot in Arkansas), and to make sure each and every chicken gets enough food and water. It also preserves the health of the birds. There is not a cage in site in any of these houses. I stood, doors wide open for well over 15 minutes watching the chickens and not one tried to escape. OK, so that is a joke, but I was truly impressed with how much room they have. I also noticed that the saying ‘Birds of a feather flock together’ was true as you would see packs of birds hanging out closely with each other. 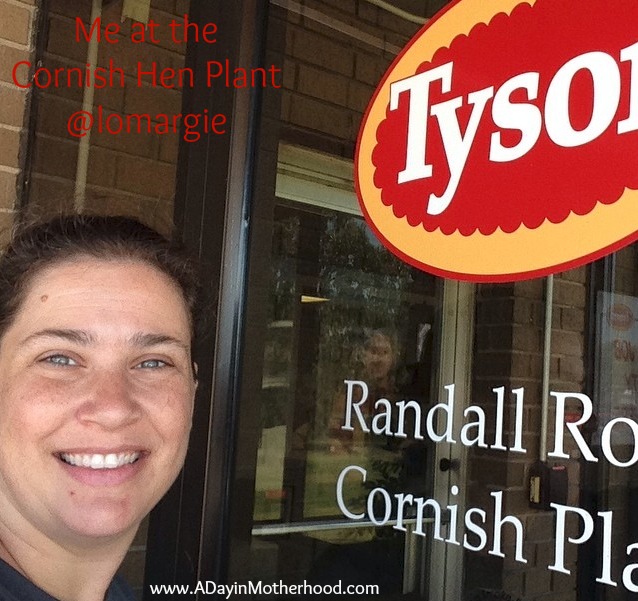 I saw these birds, who were about 28 days old at the time, I think, running around, jumping over the low to the ground water lines, pecking at the food on the ground and chasing each other around. None seemed in distress and, in fact, they live a better life than my dogs. They have to poop outside!

Now listen, no one is perfect. Improvements always need to be made in any industry and any company on this planet. That is why there are regulatory groups and people who are asking question after question.

But as I walked the parts of the Tyson Foods business, watching the USDA sitting next to Tyson employees inspecting in three different phases of production, and I saw the million dollar machines in the state of the art labs that can detect the smallest of organisms and met the people that are just like you and me, I was impressed. Family oriented and wanting to give their families the best of the best. The safest of the safest and the healthiest of the healthiest, my opinion started to change. My mind opened up to the truth and my confidence level in the natural safeness of my foods skyrocketed! 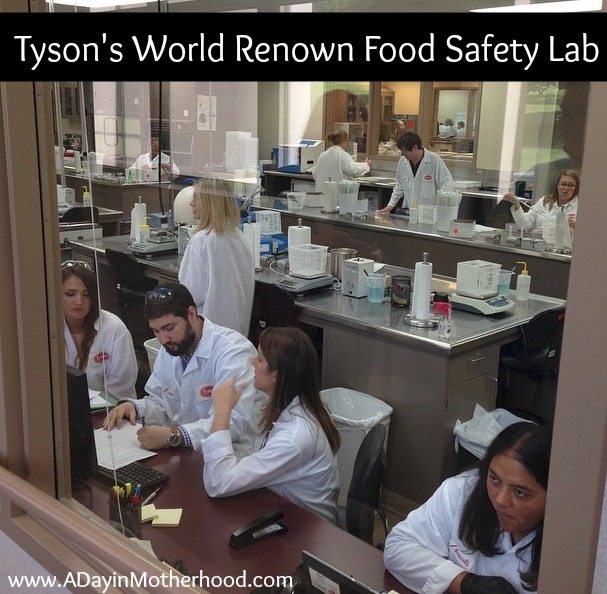 What else would you like to know? I can ask Tyson directly and get you an answer!