This year marks the first official Mother’s Day I have had as a single mom.  Although, as most moms can attest, sometimes Mother’s Day – even married – feels the same as any other day.  Except maybe you get a card.

But as a newly thrilled single mom, I wanted to make this day as special as I could for my kids.  And for me in the process.

The kids gave me one of the best gifts and slept late. Like 9am late.  That never happens here.  Like… EVER, so the fact that I got to sleep in too was just amazing!  I then opened the awesome gifts the kids made me at school.  A precious handprint from my Megan, a cookbook with lots of yummies from Sarah and a hand print jar from Katie! 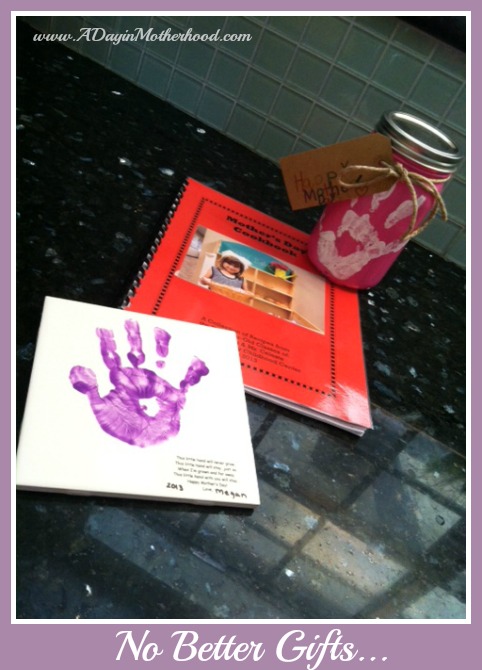 I had tears in my eyes as I drank in their perfection and smiles and listened to the ‘Happy Mother’s Day’s’ that escaped their lips.

The girls wanted to take me to breakfast so we slowly got up, got ready and headed out.  We had a looooooong wait but eventually ate. I gave the girls each money and they announced to the waitress that they were “Taking Mommy out to Breakfast!”  It was the most special I had ever felt on Mother’s Day!

And then it was time for Mother’s Day to continue by taking my girls shopping for summer clothes!  Yep, that is how I roll!  They needed clothes, I wanted to spend time with them, so off we went.

But as we headed into the store I heard an “Ouch” and then a blood curdling scream.  My 6 year old, Katie, had gotten her toe caught under the metal door and sliced two of her toes open.  And they were bleeding… a lot!

I picked her up and calmly – you know that calm, moms – walked to the register where people were turning to see me holding a little girl, screaming at the top of her lungs, blood running from her foot, down her flip flop and onto the floor.

“Does anyone have a bandaid?”, I ask.  The employees just kept checking out, shaking their head’s no.

“Can you tell me where the bathroom is?”

Still no response from  employees.

A mom who was in line checking out handed me a bandaid and told me that the bathroom was around the corner.

Grateful, I carried my still bleeding daughter down the longest hallway in the world and watched as my other two girls followed the trail of blood we were leaving.  I would have smiled at their amazement at how each splotch on the floor got bigger and bigger but I was preoccupied.

We got to the bathroom, Katie screaming, her blue flip flop now red and put her foot, shoe and all under the water.  As i rinsed and tried to calm her there was a knock at the door.

It opened and the manager of the store poked her head in and said… I KID YOU NOT, “I was trying to find you to help you before you dripped blood all through the store!”

Nope – Just frustration because she could not find me to so I would not soil her floors.  And, to the point, we left a trail… so it was not like we were hiding.

I responded, “I didn’t see you and my daughter needed attention.”

Clearly frustrated, she closed the door to the bathroom and I never saw her again.  I was, later, dumbfounded and a little peeved.

As we got Katie cleaned up, stopped the bleeding and assessed that, other than some nasty cuts, she was fine, I got paper towels and cleaned the blood off of me and then headed out to spot clean the floors.  I ran into a woman mopping and was at least grateful that I did not have to clean every spot back to the front of the store.

And then we went shopping as if nothing had ever happened.

Later as I relived the day, relishing in the perfect imperfection of it, I smiled ear to ear.  Because with the trauma of bleeding through a store, the joy of listening to my girls ‘buy me breakfast’ or the laughter as they watched me open their gifts, I realized that it was just another day in motherhood.  And I will take all the days like that that I can get!