Mother of the Year

Mother of the Year

I passed my husband, snoring in bed, knowing that his promise to get up and help me would be in vain.  I am ok with that though as it is always easier to get stuff done when it is just me.  No arguments about how he would do things better and more efficiently. 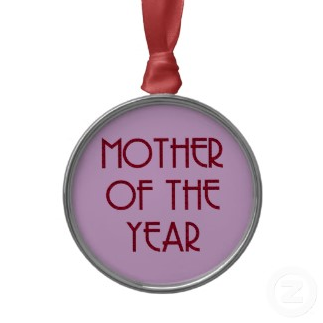 I vacuumed out the car, packed the girls bags for the day, and loaded the cooler with goodies for my parent’s house.  I got each girl up,dressed her in her prettiest dress, bowed her hair and defunked her breath.  Around this time I heard my husband stir, mutter half heartedly that I should have woken him and loaded my dolled up girls into the car.

When everyone was settles, I drove the 2 hours to my parents house.  My husband slept and my girls watched Christmas movies.  It was pretty uneventful.  We arrived and I headed to the kitchen to help my Mom with dinner.

It was a lovely day.  I, as predicted, helped my Mom as much as possible and tried to keep my kids from breaking anything I could not afford to replace.  I handled fights, tears, diapers, potty time, and anything else that I usually do on a regular old Mom day.  I did get some breaks when the husbands took the kids out to play and when I got to chat with my Mom about Christmas coming up, so it was really nice.

As we loaded up, the waterworks on the kids began.  They did not want to leave.  They love my parents and would probably move in if I were not selfishly wanting to yell at them in the privacy of my own home.  Add to that being very tired and I was in for a treat.  I took a deep breath and entered the minivan, putting my own safety at risk.  I buckled the baby in – she’s so easy sometimes, talked my 4 year old into at least sitting in her seat, and backed out of the door to let my 3 year old throw her royal highness tantrum.

I just stood…. and watched.

My husband started to get upset so I sent him back in to retrieve bags.  No need to fuel the fire, in my opinion.

While throwing her tantrum, Sarah flung herself forward out of the door of the van and landed, face down, on the grass.

That had to hurt.

I calmly picked her up, snuggled her to my chest and started doing the one thing that always works with her.  Asking her questions.  Does this hurt?  Does that hurt?  Do you need a new nose? And on and on, until I got a little giggle, a small sniffle and a sweeter child.  I asked if she was ready to get into her car seat and go home and she said yes.

I buckled her in and turned around to an audience.  There stood my husband, my mother and my father.  Apparently they had come running when they saw Sarah take the spill and stopped short when they saw I had it under control.

Saying good bye, my father says, “A hug for the Mother of the Year.”

I was taken aback and mumbled something very unworthy of anything of the year – except maybe dunce -and got in the car.  We left and 15 minutes into the trip, I had 4 asleep.  I was grateful for the quiet car and started to think about what my father had said.

“Mother of the Year”

Hmmm… what if there were such a thing?  How would she even be chosen?  Would all mothers get nominated and how would we all be categorized?

Who deserves it?  Is it the Mother who has 10 children and home schools them all, lovingly grooming them for life out there?  Is it the working Mom who runs home as soon as she can just so she can inhale the scent of her child before he or she tumbles into bed while her heart aches?  Is it the adoptive mother who took a needy child and raised it as her own?  Is it the divorced Mother who left a bad situation and struggles daily to provide normalcy and dual parenting to her children?  Is it the Mother of one who endured months and years of pain and needle pricks to get a baby she longed for her whole life?  Or the Mother of three who had no idea what she was in for and struggles every day just to keep her head above water?

How would the barometer be set?  And who gets a  vote? And what happens when it is awarded?  Do we all get an all expense paid trip to a large theater, dressed in designer fashions that we have had our choice of, dripping in jewels that have to be returned immediately after the award ceremony?  Will there be a day care center there managed by Supernanny, because surely we would all miss our kids – eventually?

And what would the award be?  Money, statues, notoriety.  Would we suddenly be catapulted to the next level of motherhood?  Guaranteed a staring roll in the next temper tantrum?  Maybe it should be a lifetime of housekeeping service, a professional chef in my kitchen, or even a Nanny.  She does not even have to be super.  Just a warm body with arms that believes in absolutely everything I do.

Or maybe this reference to “Mommy of the Year” is just an illusion.  Something hanging out there, dangling, just out of reach for me. But paving the way to the stars that it hangs within are other awards like footprints on the birth certificate, hand print turkeys on Thanksgiving, and a clumsily wrapped macaroni necklaces on Christmas.  Mother’s day cards worn and tattered from being opened over and over again by me, late at night, admiring the penmanship of my little girl, now a lady with curls on her P’s.  Or watching her say “I Do” knowing her old was once my new.  And then being handed my first Grandbaby, who has my eyes.

And like the simply complicated, spinning constant of motherhood, so is the scale on which I think I am rated.  The level on which I think I am judged.  And to be honest, though I think my dad’s comment was heartfelt and an amazing compliment, I think I’d rather pass on the actual awards ceremony.  Or let someone have it that is just as deserving, if not more.  I’ll take my three wiggly, whiny, cranky, loving, beautiful statuette’s, wrap them in my old, comfortable pajama’s, and drink in the scent of their atmosphere, and just try to keep my cracked crown correctly tilted on my head.

Get more Writings on Raising Daughters and Parenting