When the Morning Routine Leaves you in Tears

When the Morning Routine Leaves you in Tears

I walked back from the bus stop dragging two scooters and a bicycle feeling them well up inside me. The frustration and angst that I struggled to hold down were pressuring the tears to release themselves. As I walked, fallen leaves scattering under my feet as if in fear, I listened to the roll of the plastic scooter wheels on the concrete. I would not let them out. I was a mother, after all, and we all have days that make us want to cry. I walked in the house, depositing the kids riding toys along with the others, making a mental note to make them clean up the pile of metal and wheels when they got home, and entered the house. When I promptly stepped on a small, hard plastic, character and screamed out in pain, I lost the battle with my tears.  When the Morning Routine Leaves you in Tears how do you go on? How do you deal with the frustration and still be productive?

It started with my 7 year old not wanting to get out of bed. She didn’t want to go to school. It was boring, she didn’t like it, she didn’t want to go. I have been hearing this from her for the last week or so, peppered into conversations that we have, but now it has reached a point where I have to reach out to the teacher to see what is going on. As I made a mental note to email the teacher to see if this is a sign that she is having trouble with kids or school work, I told her she had no choice and needed to get out of bed.

I walked away to fold a load of clothes that I had done before I got them up and then walked back to the room. My two oldest were still in bed. Having lost a precious 10 minutes, I threatened grounding and finally, complaining and sassing, they got up and started to get ready. My 7 year old continued her barrage of complaints and pouts until, finally, she saw an outfit she wanted to wear. The issue was that both pieces were fleece, bought for the ice day that was promised a few weeks ago and it is going to be 70° and sunny today. After a 5 minute discussion about how hot she was going to be, I gave in and let her wear the clothes.

We were moving now, running 15 minutes behind but catching up fast. As I sent them all to brush their hair and teeth so I could get their breakfast ready, I started to feel better. The feeling was shattered by screaming and yelling and the sounds of things being thrown in the bathroom. I threw their breakfast in the microwave – yes, I cheated this morning – and headed to the bathroom hoping to avoid a more time consuming disaster.

In my haste to help three girls find the perfect headbands, I smelled burning. I ignored it so that I could make sure all of them brushed their teeth properly. When I emerged from the bathroom that held three kids still arguing over one head band -that was broken, mind you – the house was smoking. I had put the pancakes in for 2 minutes instead of 20 seconds.

Almost at the end of my rope, I put more pancakes in, opened the window and cranked up the fan on high. The girls appeared and I told them to get their backpacks and that we had to go or we would miss the bus.

Yep, you guessed it, Sarah was now burning up in her outfit. I held back my true anger that was building at the fact that these kids won’t take my word for it and grabbed a short sleeve shirt and thin pants. As I tried to redress her quickly, I told the other two to get their sweaters and to get outside to head to the bus stop. They did, thankfully. 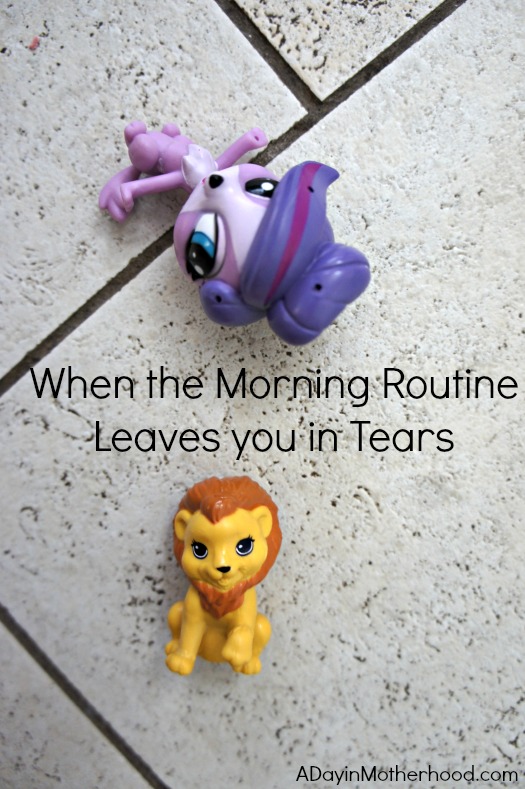 As I redress Sarah I see that the bus is supposed to be at the stop up the street in 2 minutes. I hustle Sarah out and we head to the bus stop.

Neither Katie or Megan had gotten their sweaters. I am tempted to make them suffer but don’t want to hear it, to be honest, and grab some sweaters I have in the car. Katie puts hers on but Megan throws a fit. ‘I don’t like sweaters!’.

Then I hear from Katie, ‘Mom, where is my breakfast?’

All done I tell them that I am going to the bus stop. They can get whatever they need but if they miss the bus, they are grounded from everything but books and cleaning for the next week. And I really, really meant it!

As both disappear into the house, Sarah and I head to the bus stop. Katie comes out fairly quickly, pancakes that are not burnt in hand but Megan is gone a while. I start to head back to the house as I see the bus rounding the corner when she comes down the driveway on her bike, sweater securely on her body.

When the Morning Routine Leaves you in Tears it is hard to see the happy in your kids. It is hard to see the good about motherhood. It is hard to want to deal with all of the personality traits and idiosyncrasies of each particular child. But after the pain subsided on my foot and the burned pancake smell left my house, I started to feel better. A shower and some more coffee later and I have almost totally recovered.

When the Morning Routine Leaves you in Tears you simply get up and do it again the next day. It is what a mother does.