When you are sitting in directly in front of entertainment royalty it’s hard to keep your cool. I got the incredible opportunity to sit with Meryl Streep, Rick Springfield, and Mamie Gummer to talk about their roles in the upcoming film Ricki and the Flash, in theaters August 7th. And I have pictures to prove it. 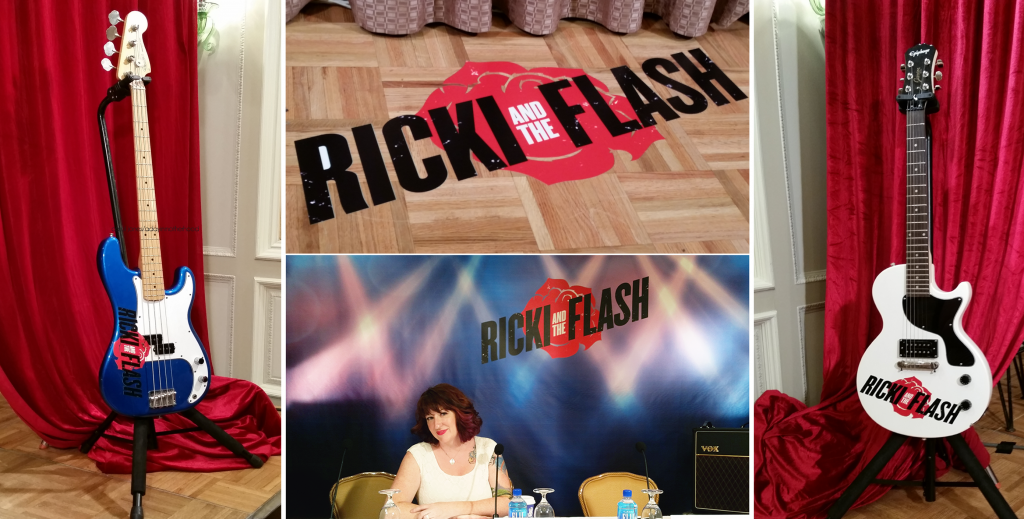 The room was small – about 20 chairs lined up in rows facing a small elevated platform where Meryl, Rick, and Mamie had been set up to answer questions. There were two guitars flanking the makeshift stage and a big Ricki and the Flash backdrop that added contrast to the otherwise modern yet minimal decor of the meeting room at the Ritz Carlton in New York City.

We sat and chatted about the movie quietly. Then all of the sudden Rick Springfield popped in to the small room of bloggers – about 14 or so of us – to say hi and take some selfies with us. Rick still has that sly, cool saunter, ever the rock star and knew he was coming into a group of not only press but “excited press” – we are the ones who will post photos on our social media, the ones who will call our friends afterward with the “OMG!” enthusiasm of a fan. He picked up one of the prop guitars:

After the impromptu mini-performance, Rick left the room and came back moments later with his co-stars Meryl Streep and Mamie Gummer. This is when we as excited press got really nervous.

Meryl sat down and looked around the room at us smiling. Mamie was beaming. 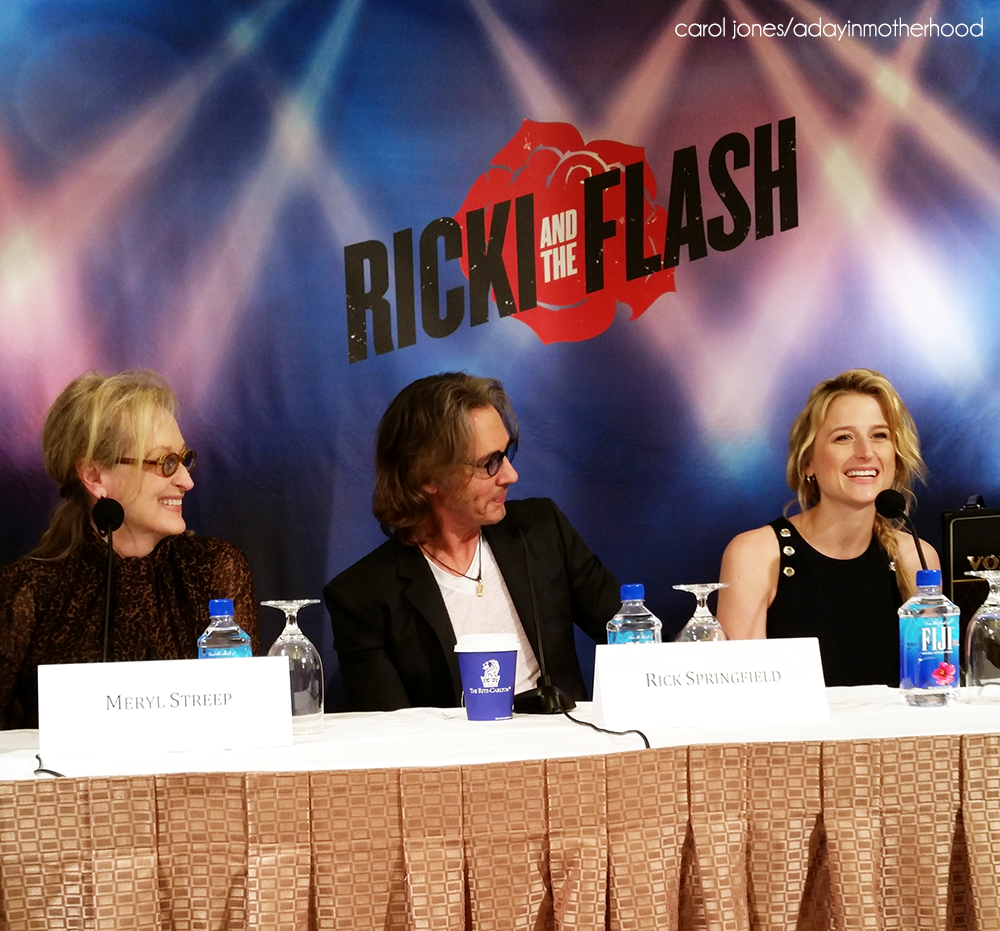 In Ricki and the Flash, Meryl’s character Ricki decides to pursue her dream of becoming a rock star when her children are young and leaves her family to do so, causing obvious strife between her daughter, two sons, and her husband. We asked Meryl if she had ever given up anything for her family as far as roles go.

“Yes, I was cast in a movie called Ragtime. But I had just found out I was pregnant and was married for about 20 minutes, but it worked out ok because Henry…” – at this time Meryl looks over at Mamie, who is her daughter in real life and in the film – “well, he’s not as good as my second child!”. 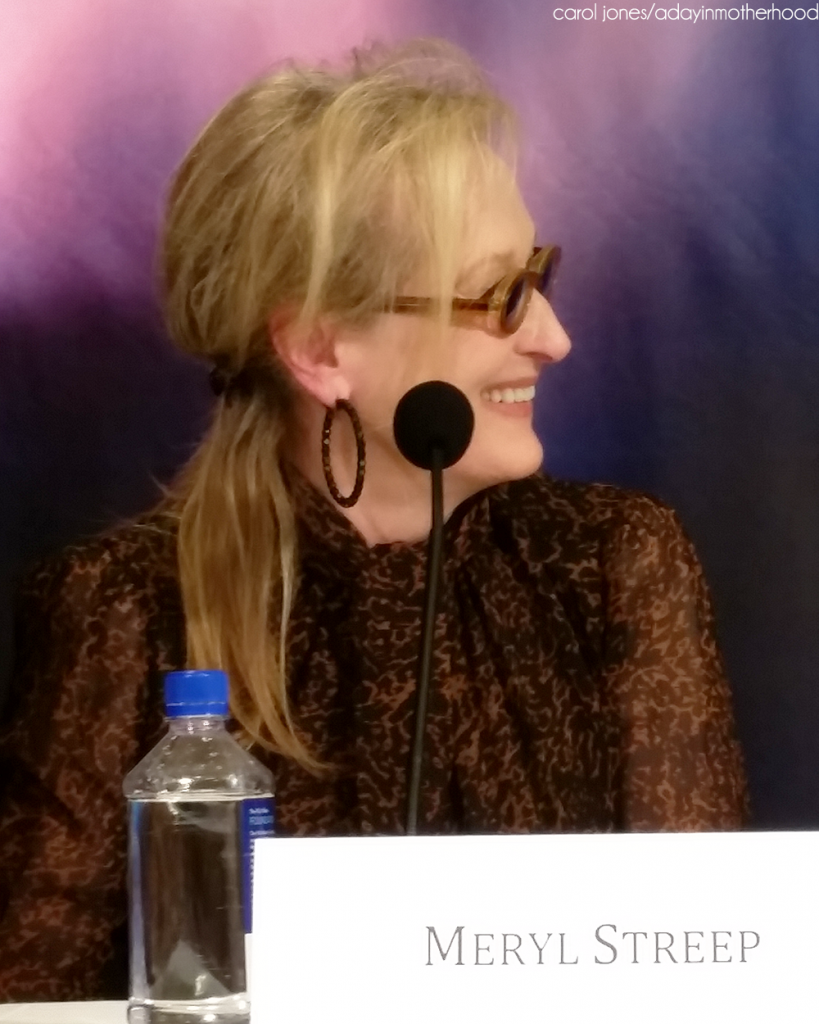 “Did you all get that?” Mamie joked.

There’s so much music in Ricki and the Flash – mostly covers with one original song sung by Meryl with only an acoustic guitar. We found out that they did have a say in some of the songs that were played. Incidentally, Meryl played her own instruments and sings her songs as she performs in the movie, which leads to a wonderful authenticity and grit that adds to the mood. At first there were only supposed to be 3 songs, but then Jonathon Demme (director) added on more, a little bit at a time, until there were no less than 10 songs that Meryl and her band had to learn and play. 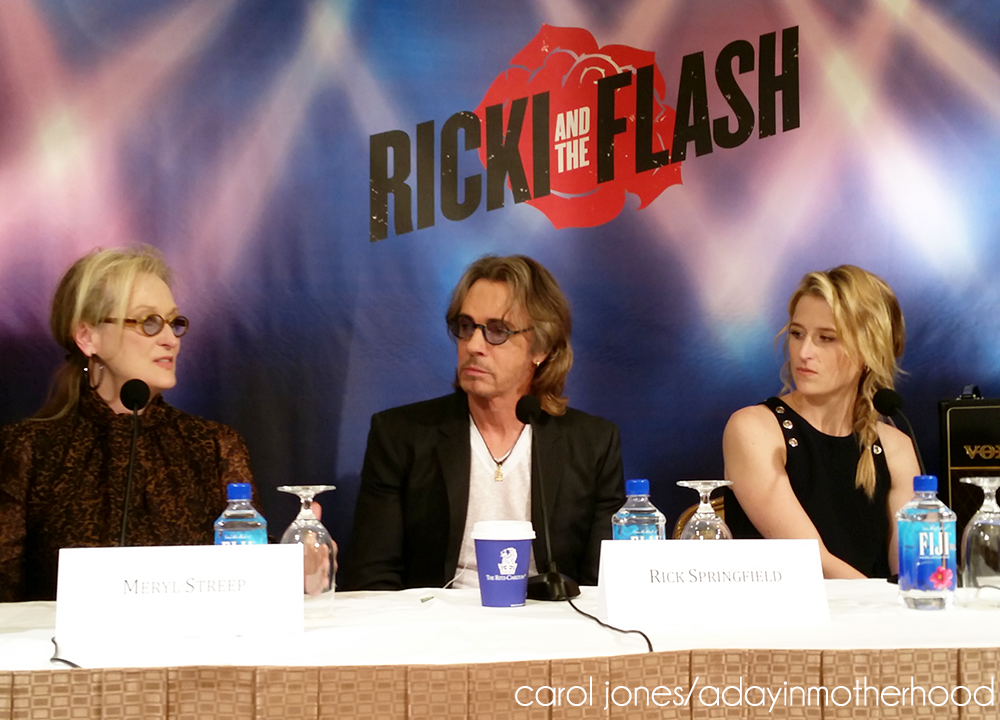 “There were some difficult songs in there,” said Rick, “she learned them all and played them well.” Because music is a core component of the film dynamic, the songs needed to weave the story together, but still keep the “cover band” feeling. We did learn that Mamie was a huge fan of female rock of the late 90’s – the Indigo Girls, Sarah Maclachlan, Fiona Apple “spoke to her heart”. She does however keep her musical tastes wide by playing hip-hop when she is feeling down or unmotivated to get her spirits up. 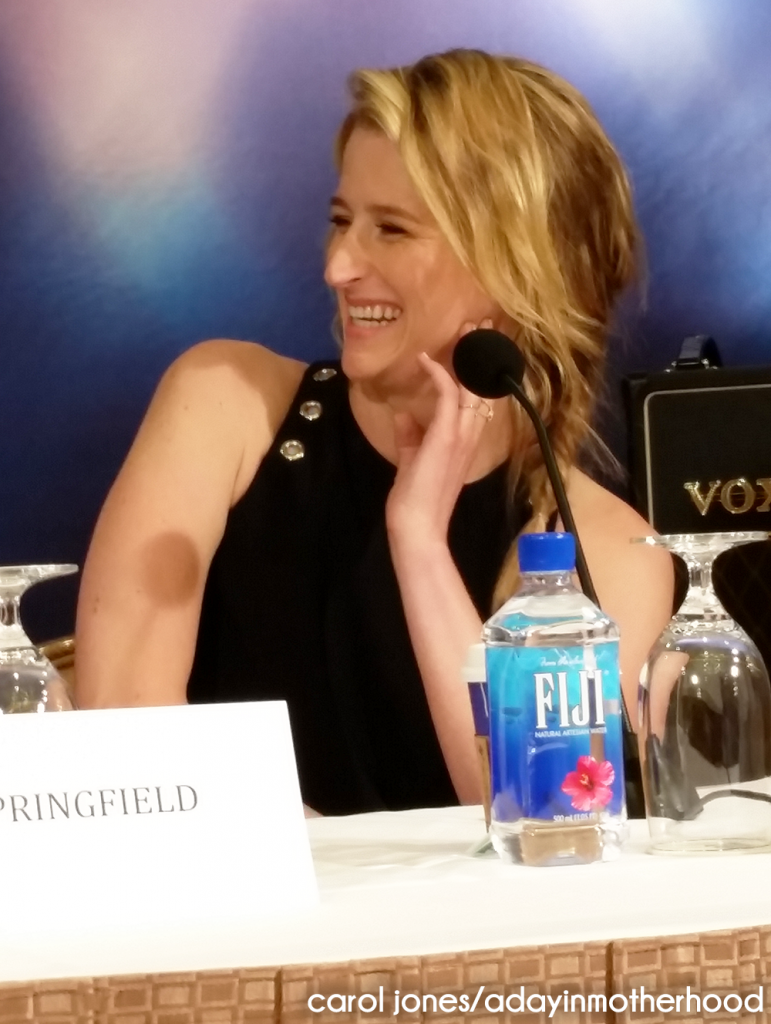 Meryl has played some amazing roles in the past – from free-spirited Donna in Mama Mia, Julia Child in Julie & Julia, and one of my personal favorites Miranda Priestley in The Devil Wears Prada. She even played an evil witch in Into the Woods last year, but  to play a wanna-be rocker in a Tarzana cover band was something she had yet to cross off her list. And when Meryl takes on a role, she goes for it completely.

“It was so fun watching her play,” smiled Mamie, obviously so proud of her talented mother (and a talent in her own right, in my opinion Mamie’s acting is not to be missed). “It was more fun than anything I have ever done, no question. And it was a privilege to step into something that peoiple do really, really well and pretend you can hold your own.  That was amazing. When we started we played in a set that was meant to look like a club – on the end of a dock, but when you went in there, the place just throbbed. And we played and the extras said ‘Man, if this was a real bar we’d come here EVERY NIGHT!’ We really set it off.” 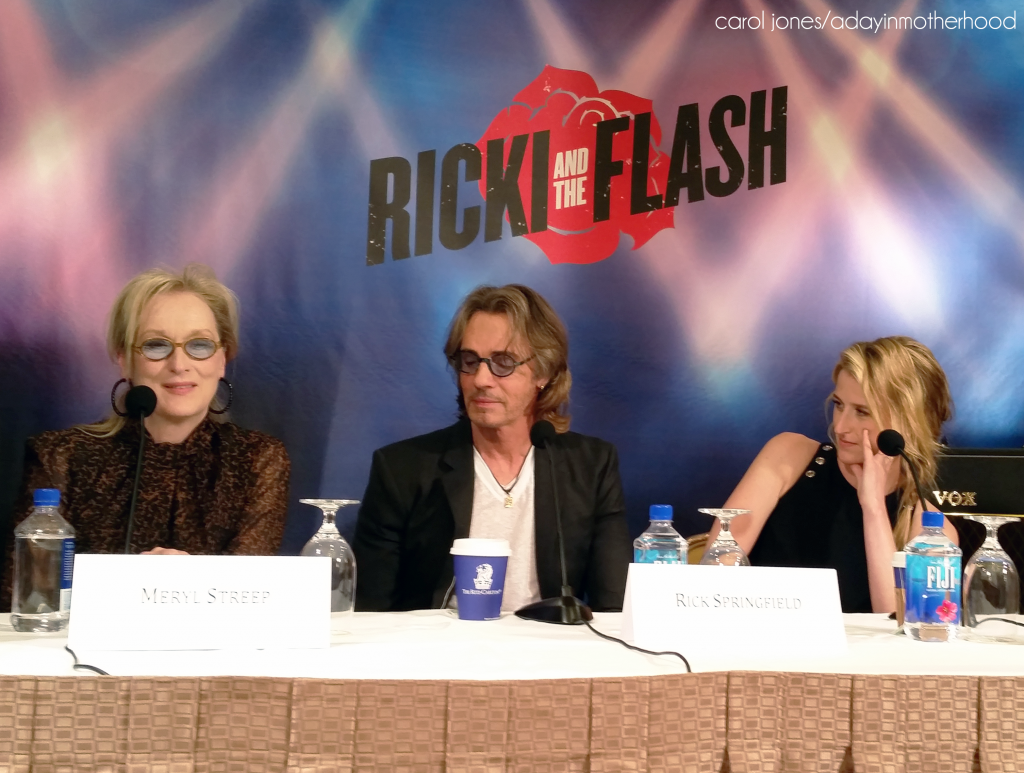 “It was fun,” added Rick, “we would jam in between takes, and we knew when the take was over because Jonathan Demme would come spinning and dancing out on the dance floor.”

One scene to look for when you see Ricki and the Flash is a particular bar scene where the band is playing. In the scene Ricki jumps off the stage and plays to the crowd, dancing with them, getting a drink at the bar, all the while never missing a beat in the song they are playing. Much like a true rock star would do. I found out that Meryl’s antics were entirely unscripted. In her words she just “felt like doing it.” That moment in the movie is proof that Meryl Streep owns her role as Ricki.

See Meryl Streep and her daughter Mamie Gummer in Sony Entertainment’s Ricki and the Flash, a story about a mother and daughter trying to make things right in their relationship.

Ricki and the Flash is in theaters everywhere August 7, 2015