Recently I went on a trip to New York City for the Red Carpet Premier of War Horse, opening Christmas Day!  But Disney and DreamWorks Pictures had other wonderful events planned as well for us.

One was to head to the New Amsterdam Theater to see the critically acclaimed Mary Poppins on Broadway!

Since seeing it I have racked my mind for the appropriate adjectives to describe this experience.  Magical.  Tantalizing.  Mesmerizing. Perfect.  But the one word that continues to enter my mind is simply Spectacular!

The  perfectly sung and timed music, the perfection of the casting from the stunningly talented children in the play to the amazing talents of Mary Poppins and Bert to the incredible ensemble cast made this play a stand out among any others I have seen, and I have seen a few.  And the detailed sets just tied it all together.

I am actually not sure what I was more impressed with, Bert literally dancing on the ceiling!, the incredible choreography in Supercalifragilisticexpialidocious! or the timing, expert tap and energy on Step In Time.

See the Supercalifragilisticexpialidocious! clip below – try not to get sidetracked by how these young children handle the amazing choreography – like I did!:

That is only 2 minutes of this colorful, creative, beautifully created stage adaptation of the beloved Nanny that every child wished they could have.  At least, I did!  Flying through the air on an umbrella?  Yes, please!

I would have never guessed that the actor playing Mary Poppins, Steffanie Leigh, is in her Broadway stage debut!  As she dances and sings and virtually floats around the stage tending to Michael and Jane Banks, solving problems with a Spoonful of Sugar and a charm that exudes from the stage, her ease makes her look like a veteran.  I loved her, I really did.

Bert, played by Tony Award Nominee Gavin Lee, is a friend everyone should have.  A jack-of-all trades with a talent for being there when you need him, his role anchored the show and kept it light and exciting.  The highlight of his performance, which you will probably see on every single review you read about Mary Poppins on Broadway, is the actual climbing of the walls and dancing AND singing while on the ceiling!  And he kept in time, in character and in tune the entire time!  It was stunning! 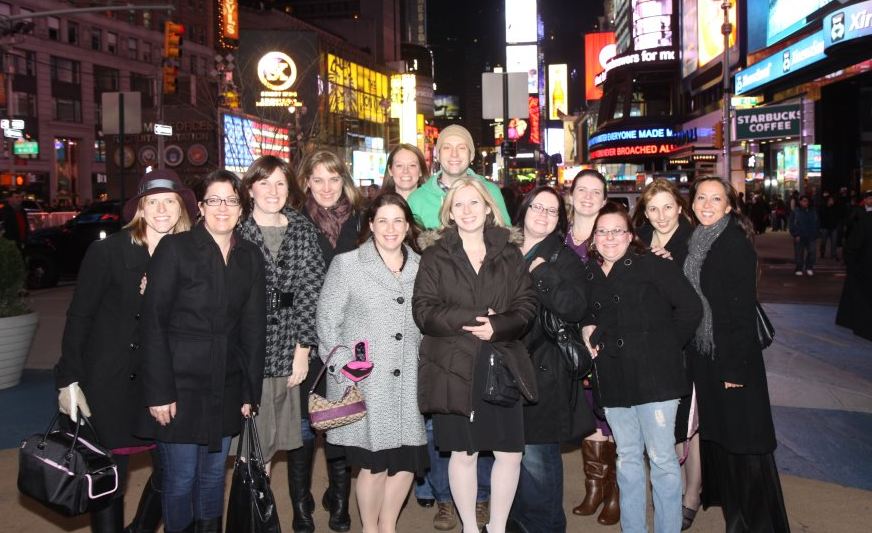 In Times Square After Mary Poppins on Broadway

Mary Poppins on Broadway is a live theatrical presentation that is perfect for children of all ages!  The epitome of what Broadway should be, the elegance and stature of a New York show, and the entertainment value of priceless!  I did not want to leave and was a little sad when it was over!  I am just glad that I brought home the The Live Cast Recording

CD so that my kids and I can dance and sing along any time we want!

Even though I have seen the classic film and have now seen Mary Poppins on Broadway, I would see it again and again, every day if I could.  It really is just that good!

If you are headed to New York, get your tickets now for this Simply Spectacular play that has lit up Broadway for 5 years, 8 shows a week!   Or check out the schedule to see if it is coming to a city near you anytime soon!

My next post about the Mary Poppins experience will be of our tour of the New Amsterdam Theater and the backstage prop room where we got to try things on for the Disney Stage shows!