It is a goal of mine to teach my children to be nice.  To be kind to others, respectful of others and accepting of others. I want them to say please, thank you, you’re welcome, and yes sir officer, I know I was going too fast. I have always believed that a person goes a lot further with a kind word than a snide remark or sarcastic blathering.

I said I believed it, not that I practiced it! 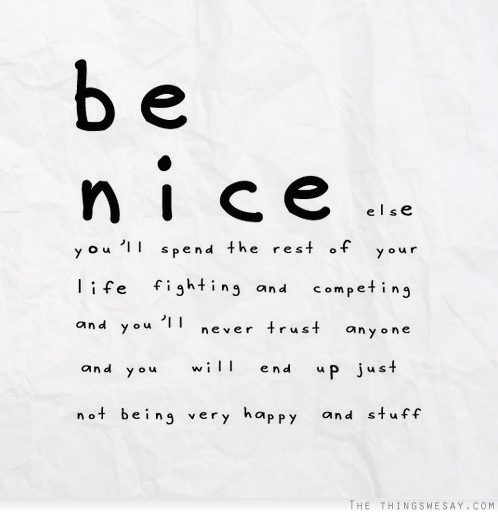 I will say, head hung in shame, that that I am not the best example to my children on kindness.  Especially if you take into account my lack of sleep,  lack of time to myself and lack of knowledge on how to actually do this job!

I’ve been known to yell, roll my eyes, take very deep breaths of frustration, and threaten very long stays in a small room just with each other with no parental interference.  All things that do not exude the most wonderful acts of kindness for my children to follow.  I do hammer home verbal respect.  Thank you Mommy for duct taping me to the wall.  It has taught me the very valuable lesson to never throw water from the toilet at my sister again.  That you ma’am for that lesson.

Neither is society.  I’ll be honest, it depresses me how many people out there have just lost the entire act of being respectful to other people.  Niceness seems to have gone out with plaid jumpers and Tang.  From the disrespectful cad who parks in the pregnancy spot at the grocery store who, though possible the proud owner of a twelve pack belly, certainly does not have the anatomy to actually be pregnant.  Or the lovely man dressed in an Armani suit, Rolex watch flashing on his wrist, texting feverishly as he pulls his Mercedes right in front of me without so much as looking in his mirror to see a mother and her three small children slam on the brakes in fear of hitting him.

And if one more person who obviously sees a stressed out mother with a screaming one year old, whining two year old and begging four year old, three bags hanging from her arm, purse falling off her shoulder, trying to finagle a maneuver to somehow get everyone to the car and in their seats, walks through a door and lets it slam in her face, she might be forced to do something that will land her on the local news.  Nothing violent, but certainly something newsworthy.  Like following them home and forcing them to lick her car clean and spit shine her tires with no towels.  With her kids critiquing them.  And her taking pictures to prove to people that she does, indeed, wash her car.

Thus I generally hold out very little hope that my children will learn kindness from the general public.  Friends and their children, yes.  They signed a contract.  But Mary Quary and Joe Blow, I have no faith in.

So today, when it finally sunk in that I had only a few more days to purchase a nap mat for Sarah for school on Wednesday, I bit the bullet, gathered my two kids that were not in school and headed to the store.  Having exhausted any possibility of paying a normal human price for this mat last minute, I parked in front of the only place I knew that had one, even though it was $50.  A ridiculous price only paid by Mercedes man and procrastinating Moms.

I noticed as I was barking instructions to my two youngest not to touch a single thing in the store – no matter what – that two other stores in the same strip center also advertised that they carried nap mats.  I hurriedly went into the first one, was directed towards the cutest mats I had ever seen and quickly u – turned when I saw the price.  $85.

Seriously?  For something my child might possibly pee on?  No.  But thanks.

I head to the store that I know carries them for $50 also known as the GOTCHA price!  Dreading entering a toy store that I may never get my kids out of, much less in time to gather her sister from school, my eyes dart for a safe haven to escape to.  Ironically, at the store next to the toy store, there is a large yellow sign with nap mats for sale prominently displayed.

Knowing that I could very well be doing another quick u – turn, I decide taking a chance is better than going into the toy store.  I enter to a warm and wonderfully inviting greeting from a man who reminds me of a burly Grandpa and the father from “My Big Fat Greek Wedding.”  Accent thick, smile wide, he directs me to the nap mats and informs me that everything is 20% off.  With the discount, I am thrilled to peaches to see that I can get a very cute and pee withstanding mat for $43.  I’ll take it!

I let Sarah pick her color, black and hot pink, and her shyness wears out as the gentle man is, obviously, becoming enamored with her.  She is telling him her name, that she is two and will be three on October ‘ewevenf’, and that she starts school on Wednesday and now has a black nap mat with pink insides.

I can tell, even in my hurry, that she has made a fast friend.  And I can tell that he is happy to have her.  He asks her her favorite color and she actually, much to my enjoyment, gives it some thought.  She picks purple and he says “Come here little one, I have something for you to celebrate your first year in school.”

We followed him and he ever so gently picks up the sweetest little beaded charm bracelet, obviously made for a child, and placed it gently on her outstretched arm.  I asked if I could please pay for it and he brushed me off as if insulted I would even think of it.  We walk out of the store, Sarah with her arm in the air, careful not to knock her new bracelet on the door, other hand clutching her nap mat, proud smile on her angelic face.

I waved good – bye, noticed the man had just as proud of a smile on his face and think, “someone has a really great Grandfather.”  Thanking him seemed so small but it was all I had.

As we made our way to the car, I noticed a very healthy looking lady getting out of her Lexus, arrogantly parked in the handicapped space, with no tag in her window, and let out a little laugh.  She can do what she wants.  I don’t care.

Because, even though they are far and few between, there are people out there that are still nice.  And as I watched Sarah, still holding her arm above her head, beads glistening in the afternoon sun, trying to figure out how to get into the car with just one hand, I thanked the Lord above for showing me one.

And I pray for good things for the man at the store, who not only gave my two year old the best story to tell her sisters later, but also renewed my faith in people.

And showed me that it is never too late to teach lessons to mom.