Is it OK to Spank Your Child? Is This the Right Debate?

Is it OK to Spank Your Child? Is This the Right Debate?

I was watching Good Morning America this morning and the great debate of whether it is OK for a parent to spank their children is a highlighted topic.  My first thought when it came on was, “Ugh, not again!” 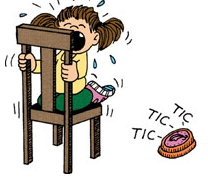 Years ago, before the blog but after my first two daughters were born, I was ripped a new one in a Facebook group because I spanked my – then almost 16  month old – daughter because she was continually climbing onto my glass kitchen table and standing up.  She would jump and hit the chandelier and it scared the heck out of me.  It was her ‘attention seeking’ trick when I was breastfeeding her new sister, changing her diaper, or rocking her for a nap.  Literally, it was only when I was tending to a very tiny Sarah that Katie did this.

Traditional punishments for her behavior were a total fail on this for some reason.  She could care less about her 1 1/2 minute time out, she was not phased at all with the removal of toys and my sitting and explaining – in toddler talk – how dangerous this activity was fell on deaf ears.

One day, I was nursing Sarah and sitting on the living room couch.  Katie had just gotten a new toy from her Grandparents so she was happily playing and I thought I was safe.  Yes, it had gotten to the point where I was stressed out tending to the baby.

True to form, and despite the new toy, Katie saw me sit down and immediately headed for the glass table.  I told her ‘no, no’ and she laughed and ran.  She climbed up, stood up, smacked her head on the chandelier, lost her balance and almost fell, head first, onto the tile floor.

I stood up, Sarah still attached,  grabbed Katie with one hand off the table, smacked her on her diapered butt and she cried.  I felt horrible.

But, and this is the absolute truth, she never climbed on that table again!

Later that day, I posted in my Facebook group and was shredded to pieces for spanking Katie.  I was given statistics, told I had ruined my daughter, told she would be a drug addict, that she would be violent, that I had failed as a parent. That spanking was a cop out and that I was an unfit mother.

The disappointment I had in myself multiplied and I ended up, unbenownst to anyone, curling up on my bedroom floor and crying for a long time.  I felt like I was no better than my birth parents who beat me so badly I had to be removed from the family at the age of 6.  I felt like I was continuing the cycle and that now everyone knew it.  And judged me for it.  And I felt like friends I trusted turned on me  and hated me.

That one event has resonated with me for my entire parenting career.  Yes, I see parenting as a job.  I have spanked my kids since that day, but very rarely.  Because I keep hearing that I am a horrible person for doing it… even if my child is doing something that could really hurt her.

That is my own, personal experience with spanking.  However, I am neither for nor against it for anyone.  I know ‘beating’ and ‘abuse’.  And I know the difference between a pop on the behind and a full on inappropriate beating to the point that the child can not breathe.  Been there.  Many times.  I would not wish it on my worst enemy.

And I will say that the constant debate on whether or not it is OK to spank does feed through my mind when punishing my children, which is the point.  However, according to statistics, 80% of preschoolers are still spanked!  So, how effective is the conversation, really?  Are we targeting the right people with such an aggressive debate on spanking?

The reality is, and you can see this on numerous, disturbing videos uploaded to YouTube.com, that people who beat their kids are probably unaffected by the constant dialogue about this important subject.  Instead, moms – really good, devoted, honestly trying to raise their kids right moms, are locked in a heated debate over this issue.  To the point that people have ended friendships over it.

So are we having the wrong discussion?  Is it important to stop spankings all together in an attempt to stop child abuse, or is it more important to define ‘spanking’ and turn up the heat on child abuse?  And stop punishing each other for parenting decisions that are used within reason?

What do you think?  Have you, personally changed your behavior because of the debate?  Are you so passionately on one side of the very blurred line on this topic?  Have you judged a friend, one way or another?  And do you think enough attention is given to the difference between child abuse and spanking?  Or is there no difference at all in your mind?

I know this is a passionate topic and I want a serious, honest discussion about this topic.  Please be respectful of my blog and my readers when leaving your reply.  I do not allow cursing, derogatory language or pure hatred on my blog.  Comments deemed inappropriate will be deleted.