We Had an INTRUDER Last Night!

We Had an INTRUDER Last Night!

My dog, Bud, is 10.  He is fierce and protective and all about making sure the girls and I are OK.  He rotates who he sleeps with to make us feel safe and he even sleeps outside some nights when he is especially concerned.

Last night, after my girls drifted off into peaceful slumber and I closed my computer for the night, Bud and I curled up in bed and attempted to go to sleep.  I kept hearing noises in the house and got up to check a few times but all was well.  It was kind of windy so I attributed it to that. 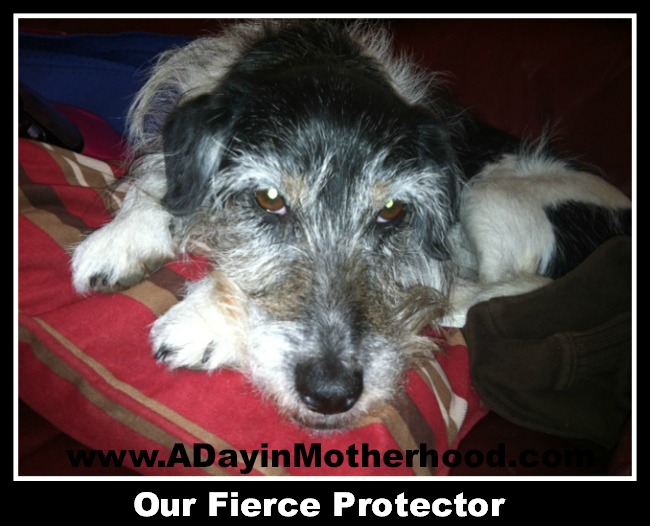 I finally fell asleep around midnight, I suppose, and tried to get my beauty sleep.

At 2:30 am, I was awoken with the crazy, something is right in front of me that should not be, wild barking of my Bud.  I mean, crazy, loud, insane barking.  So much so that he woke my 6 year old sleeping clear on the other side of the house.

I jumped out of bed to go see who I was going to have to kill for trespassing on my property.  Whomever it was was pinned up against the wall on the back porch and Bud had them cornered.  They were not moving!

I tried to peek out of my blinds and dial 911 all at once.  I could not see much but I could see that, whatever it was, it was either really short or crouching down.

I climbed up on my kitchen counter in an attempt to get a better view.  Meanwhile, my little dog is still going absolutely crazy, nuts.  I could not see much but I could ascertain that it was not a person.  Unless it was the skinniest person on the planet.

Concluding that this was a poor animal that had wondered onto our back porch, I started to yell at Bud to be quiet and come in the house.  He ignored me and continued his aggravating,  piercing evil bark.

I decided to get him in – quick-  before the neighbors shot him to shut him up.  I mean, they wouldn’t, but he was getting all of the neighborhood dogs up in arms.  The barking concert had to have woken up everyone.

I hopped off the counter and headed the fridge to get his favorite treats – hot dogs and cheese.  I tore them into pieces and threw the out the doggy door to try to get him in.  After a few dogs were out, he started to calm and the barking stopped.  But he was still not coming in or letting the poor creature go.

So, I pulled out the big guns… sausage.  Yes, leftovers from dinner were placed ever so strategically from right outside the dog door to inside.  I ducked behind my chair and when his little nose followed the enticing scent, I grabbed his collar and yanked him inside.

I then locked his whining self in my room and went out to see what poor creature was pinned against the wall of my house.

See scary, horrid, going to kill us all, creature that warranted one whole hour of insane barking below: 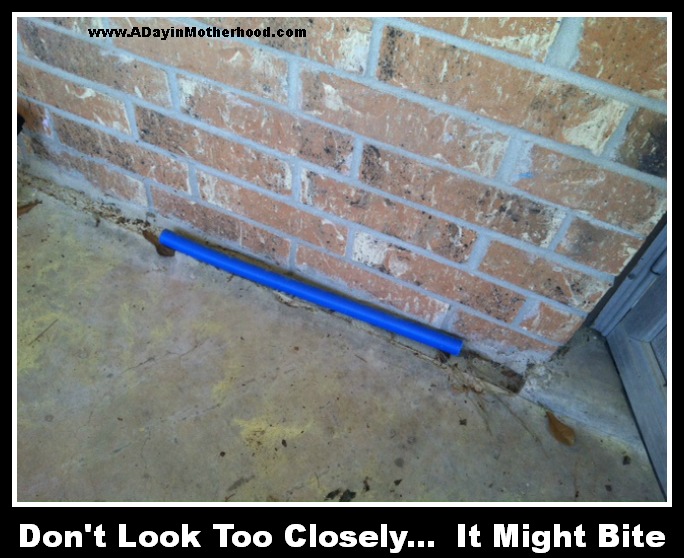 Maybe it is time I have his eyes checked.