I Have Declared War on the Toys That Clutter My House

I Have Declared War on the Toys That Clutter My House

This morning, Toys ‘R Us called and asked if they could come check out our inventory because they were running low on supplies.  It is not the first time they have called.

It is absolutely amazing to me how quickly three children can accumulate stuff.  I throw things away almost daily, don’t buy toys at the store – very often – and Christmas was five months ago.  And yet, like bunnies, the toys multiply and spread, destined to be the permanent carpet in my children’s rooms. 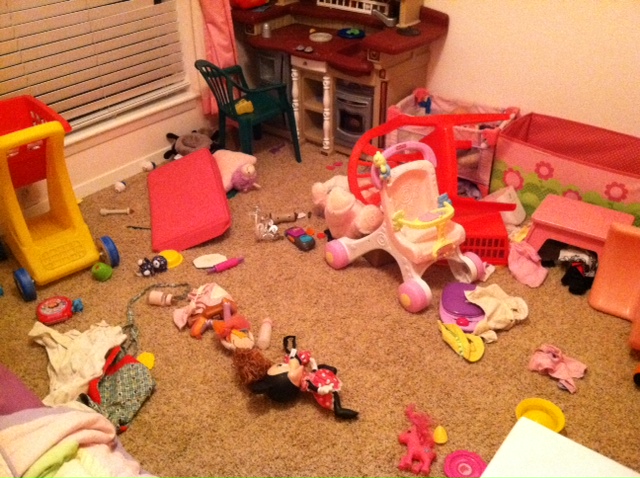 Just a month or so ago I spent an entire week matching dolls with houses, shoes with baby dolls, parts with Barbie’s horses and lone puzzle pieces with their mates and it felt so good.  I cleaned out every drawer, matched socks, took out overgrown clothes, handed them down, or donated them to others who needed them.

I stood back after that week admiring my work and thinking that I could surely keep these rooms, purged to the absolute necessities, clean and clear of clutter for years to come.

I hate it when I am wrong.

Somehow, even though we have had no birthdays and only Easter where they received the most minimal of gifts, their floors are just as covered, the rooms are just as messy, and my head is spinning in the same disbelief that it did before the purge.

Seriously – no exageration here – I stuffed 8 trash bags full of stuffed animals, extra pillows, toys that I thought they would cherish later, things to donate, things that would go to the attic and more.  And I loaded four trash bags with broken toys, stained clothing, mismatched socks and so on.

A month later, it is as if nothing was done.

Except what is on the floor that I step on in the middle of the night, scream bloody heck silently under my breath to, and silently swear I will trash in the morning, has changed.

movies just scrape the surface of what toys can do.  No longer just tanglible items that my kids play with for 5 seconds and then discard in favor of another, they are actually capable of bringing other family members in in such a discreet way that I don’t even notice until I kick one across the floor, waking the dogs who bark and wake up the kids.  At 2am.

They snicker at me, I know they do.  It is not just the voices in my head.

I am declaring war – again – on the menacing, never ending growth of the toys in this house.  And my children are going to be my armed soldiers.  Their weapons will be trash bags and their mission to rid their rooms of any toys that they are not capable of getting off their floors!

It will be a hard and long war.  Many battles I will win, many battles the toys will.  But, in the end.  I will win the war.  Because my only other option would be to join them.  And Barbie does not have a thing I can wear.