I Don’t Want My Kids Hanging Out With Bad Kids

I Don’t Want My Kids Hanging Out With Bad Kids

I would venture to say that I am one of the most accepting, try to see the other side of the story, everyone deserves kindness and friends, kind of person. Being an outcast most of my life, I understand the loneliness and the bad behavior that I exhibited as a young girl where the sole purpose was to get attention. So I thought that when I had kids I would be able to see those that others defined as ‘bad examples’ for what they are. Kids who are looking for positive reinforcement through negative behavior. The truth is, though, that if I see a kid continually being disrespectful, getting in trouble daily and being a basic pain in the ass, I don’t want my kids hanging out with those ‘Bad’ kids. So, basically, I am a hypocrite. 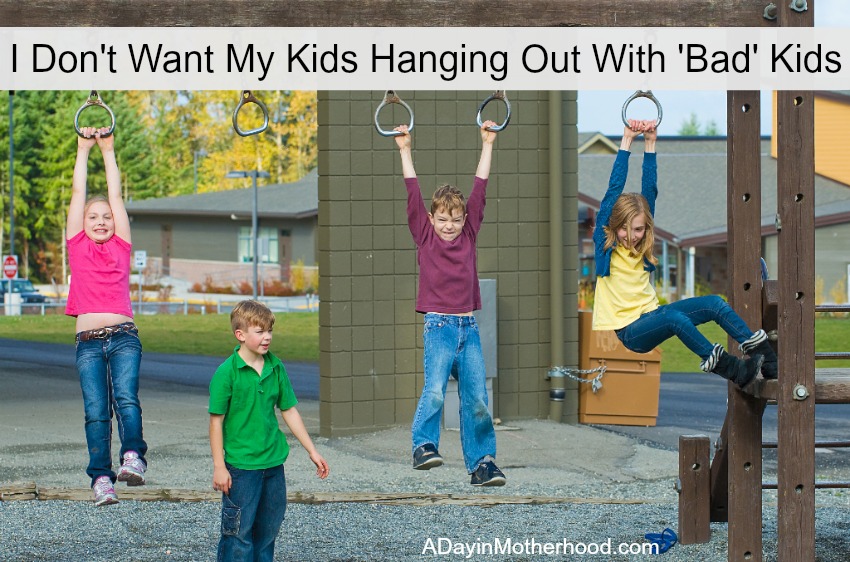 It bothers me. It really does. I don’t want to think negatively about a child. Ever. Every child deserves to have those friends who make good decisions influencing them to also make good decisions. In fact, I tell my girls all the time that making good decisions will lead to a great life with great people in it. I tell then that standing strong in their good decision making will rub off on kids that may not be doing the same. Of course, I am in total fear of my girls repeating the same mistakes I made as a child and teen, but I am hoping that their vastly different childhood from mine leads to them having a life with a lot less struggle.

But back to kids who are deemed ‘bad’.

These are kids that need the most love and affection from adults and yet, I don’t want my kids picking up their negative behavior. It is a catch 22, really. I know, as an adult, that some kids have ADD, ADHD, are on the spectrum, have sensitivity issues, and other legitimate behavior and learning challenges that no one, I mean, NO ONE, should hold against a child. And I do tell my girls that if a kid is misbehaving a lot, they need to understand that there may be circumstances that we don’t understand. I tell them that everyone is a book and until we read what is inside, we can’t judge what is on the cover.

But, as a mom hoping to raise kids who make good decisions in life as they get older, I cringe when I KNOW one of the kids and know that they don’t have any diagnosed behavioral issues and are just… bad. When I KNOW the parents and I see the seeming non-action when their kid does something wrong. When I watch a kid steal a Valentine from my daughter’s box with the mom right there, my kid in tears and her just saying ‘sorry’ without making the kid give it back. When I have to go to the kid and say, Give that back now!, and the mom is catching up on her Facebook wall and ignoring all around her. Those kids I don’t want my kids hanging around. The ones that run around with no discipline, no consequences and no lessons of right from wrong. The bullies…. Those are the kids that I ask my girls to think about as a friend. The ones I say to be kind to if you encounter them but to decide if hanging out with them will enhance their good decision making skills.

I feel horrible about it, too. I do. I excuse it by thinking that everyone encounters someone that they just should not hang out with. Everyone knows there are people that are just bad news. Everyone has seen a teen fall for the attention of a bad crowd when they are rejected by the popular one. I did it. And it made my early life much more difficult than it had to be.

But as an adult who wants everyone to know and receive acceptance and love, I feel terrible about it. I would like to think that with kindness and understanding, all the ‘bad’ kids could be really, really good kids. But as a mom, I want my kids to stay as far away from these kids as possible. Because I don’t want their behavior rubbing off on my kids.

Motherhood has made me hypocritical. I admit it.