I have a potty mouth. I land somewhere between a sailor and a sailor who has had a few too many flasks of brandy. It’s true. You would never know it on here because I think there is a time and a place to pull out the humdingers of filthy language to support your point of view. It is not on a blog, in my opinion. I also think that the English language provides enough words to adequately explain my opinion without having to turn to the darker adjectives. Besides, cussing all the time dilutes the impact. When I cuss, you know I am hopping mad with a side of peeved off beyond reality. Or I have had a drink…. 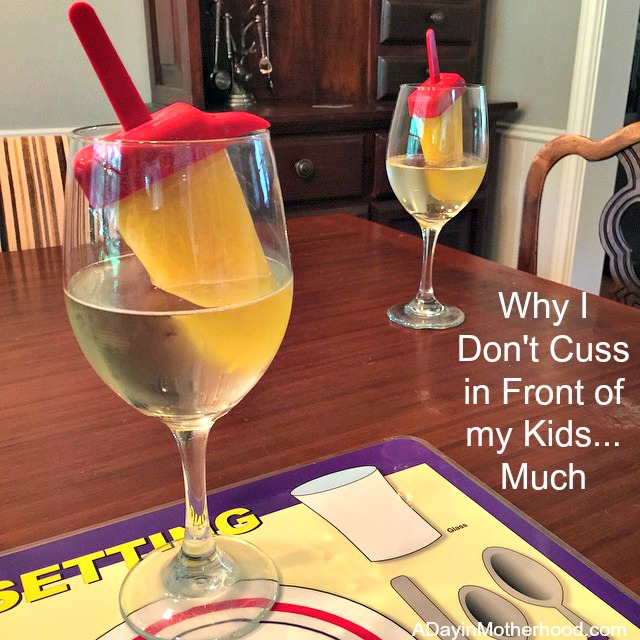 Case in point. My neighbor and I took the kids to an adventure yesterday that included lunch, Minion making and a play date after at her home. I had been up since 5:30am working so that I could spend the day with my kids and planned on working late into the night, which I did. So I relaxed a little and at her home, had a ‘mom’osa. (This is a clever little contraption of a mimosa Popsicle laying in a glass of Prosecco!). After the Popsicle, my lips and rules loosened. It’s like predictable now, y’all.

The sailor that was just told she would have to stay on the boat on the next port to clean toilets with a toothbrush came out. I dropped the F bomb and the S grenade as if I had to win the toilet mouth contest of the month. Now, I will say, I did look around and all 5 children were in the play area, their rooms or no where in sight. So, in reality, they probably did not hear a thing.

At least, that is what I tell myself. However, I did still apologize to my friend about the slips of my bad language to which she replied, ‘Oh they have heard SO much worse!’

Yea… but should they be hearing it from me?

I will say, people cuss around my kids all the time and I have only once heard a word back, to which I ignored, later told her not to repeat in a funny way, and have never heard again. And I, too, have told people that they have heard way worse when they cuss around my kids. In fact, the only time I really get upset is if it is loud, continuous and my kids are standing right there in the room drinking it all in.

So yea… cussing is one of those things that I wish was never done around my kids. I wish I could sit here and say that my mouth is clean and pure and that I am a stickler for the language they hear. But I fail many a times, even when I don’t want to. So while I can not actually say I Don’t Cuss in Front of my Kids, I can say that I am aware of it and try really hard not to… until a ‘mom’osa is set down in front of me! And then, apparently, all words are fair game when my boisterous storytelling needs amplification.

So really, if I want to stop cussing with kids anywhere in the vicinity of my voice, I need to stop having ‘mom’osas on a lazy Monday afternoon at my neighbors house….