I was a foster kid. Not adopted until I was 8 years old, I was placed in many homes in my young life. I still lived off and on with my birth family but spent a good deal of time being taken, placed and then taken again. It is an interesting way to grow up. I learned pretty quickly that there are Mrs. Hannigans in the world. But I also learned that there were a lot of Mr. Sparks, too, even if they did not have the shiny mansion to back them up. The remake of ANNIE is coming to Blu-Ray and Digital release in March and I had the chance to screen it early with my girls! Knowing a childhood favorite of mine would soon be theirs, I had the added bonus of being able to have a discussion about foster kids and the angels on the Earth that save them! 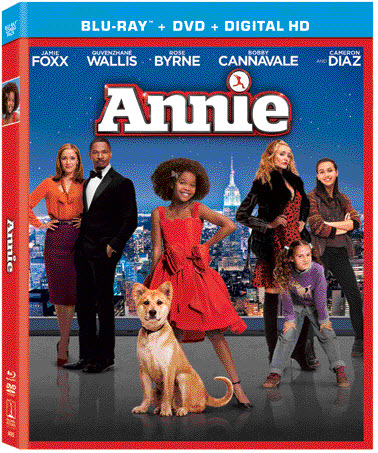 Growing up, ANNIE was a favorite. Maybe because I understood that ‘It’s a Hard Knock Life’ really existed. Or maybe becausetomorrow really is a day a way. But I remember sitting in front of the TV watching a little girl’s dream come true, even if she thought it was temporary. Now that I have daughters with a very different childhood than I had, I am thrilled and excited to show them what ANNIE can teach them! This is the perfect feel good, family movie that can start a conversation and a smile among everyone!

I’ll admit, I had a lot on my plate the night that I loaded the screener to the laptop and set my kids up. I thought I would sort of watch and listen as it played. Turns out, I was right there with them, peering over the top of three little girls, drawn into the movie that show that you are never fully dressed without a smile. Truly impressed with the excitement, music and Sandy, of course, I didn’t move the entire time the movie was playing. Interestingly enough, my three kids did not either!

As the girls and I watched, falling in love with the caring Grace, despising Mrs. Hannigan and wanting to adopt all of the girls from the foster home, we danced along to some of the classic songs, now updated and just as catchy. I love that there were new original songs included and that the story was updated to a modern understanding. The classic feel of a Broadway show combined with the modern mentions like Twitter and DNA tests, this updated version might just be the one my kids relate to most.

Honestly, an ANNIE fan my entire life, I did not expect to like the remake. But as I watched my girls smile and ask questions of ‘will she be OK?’ and make comments like, ‘How come no one taught her to read?’ , I give it credit for being a wonderful family movie that opened up the dialogue between my kids and I about everything from foster care to illiteracy to learning to trust someone again. I cannot wait for it to come out on Digital copy March 10 and on Blu-Ray Combo Pack March 17!

Pre-Order your copy of ANNIE now and curl up with your kids for this entertaining family movie. Let them learn that no matter how tough it seems, there are always people out there who will care about them, whether they are ‘birth’ family or not.

Disclosure: This post is part of a collaboration between Sony Entertainment Pictures and SheKnows.