“How proud are you of this movie? [Chimpanzee}?”

“Well, I don’t know if I can [say] I’m proud of it, because I didn’t make it, but I think it’s absolutely fantastic.  The crew, the film, sound, the effort that they made, the footage that they got, is stunning.  And the story that unfolded is magical.  And, you know, if Disney had planned it, they couldn’t have planned such an extraordinary story.  So, very amazing. [It] Will do a lot of good for chimpanzees.”  Dr. Jane Goodall 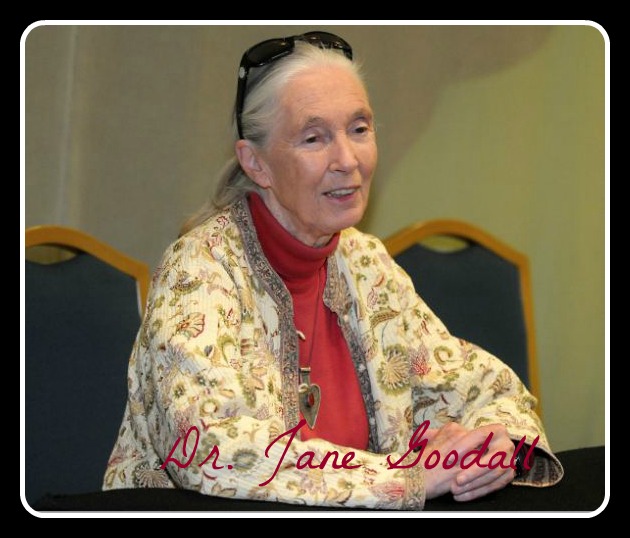 Dr. Jane Goodall is soft spoken but strong, passionate yet controlled and one of the most impressive people I have had the great fortune to be in the same room with.  I, personally, have admired her work for years… often wishing I had the passion that she has for something that needs our help so very badly.  And wishing I could create something like her amazing youth program, Roots and Shoots, that is doing work with the youth of today that will affect generations to come.

There is a certain comfort sitting across from this Chimpanzee expert and conservation pioneer.  Her stature is small but her message is huge, endearing and simple.  And as she answered questions and shared her knowledge, I grew more impressed and learned that one does not have to be boisterous, loud and attention seeking to command respect.  One just has to be confident and sure that what they are saying is, indeed, true.

As she captivated the audience of bloggers and other media in our interview session, she talked openly about misconceptions, conservation and the importance of knowing how each of our actions affect the envoronment.  Dr. Goodall also talked of the Jane Goodall Institute, how she got her start and found her calling with Chimpanzees and the rarity of the miracle in the movie Chimpanzee that transpired.

But the one thing that impressed me most during my brief time sitting just one row away from Jane Goodall is her apparent compassion and love for the animals that she devoted her life to learning about and saving.

“There’s a misconception that a scientist must be cold and objective to be a good scientist, and that’s absolutely not true. And I know from fact that you can, if you have your mind disciplined – you can watch something which makes your heart weep. You can have tears streaming down your face.  That does not stop you [from] making an objective account of what’s happened.  And quite honestly, that’s what has gone wrong with the planet.

We’ve lost the wisdom of making a decision today based on, “How will this affect our people generations ahead?” Dr.Jane Goodall

It is virtually impossible to listen to someone with so much discipline and knowledge about something you and I may never come face to face with and not be affected.  From the tip of her thumb that is missing – the result of a Chimpanzee bite – to her calm demeanor and complete confidence in the ability to relay her experiences, her desire for the conservation of – not only her beloved Chimpanzees – but the entire planet, and her complete openness about anything, she is the epitome of a class act.  A scientist with a heart.  A woman with a love.  And a drive to make it known.

I have included other excerpts from her interview and hope that you take away what I did from it.  I could sit in a room and listen to her talk all day long.  But since she travels 340 days a year spreading her message and teaching her wisdom, I was honored to have the time I did.

WOMAN:  How rare is it for a male to adopt a chimpanzee?

DR. GOODALL:  Well, we, normally, at Gumby, we’ve had brothers adopt their little infant sister or brother.  We had one 12-year old that’s like a human 15 or 16 adopt an unrelated infant.  And over all these 52 years, I’ve heard of one other story of an alpha male adopting an infant, so it’s very rare.  Very rare.

Mediator: [Do] you want to tell about the conservation program, Jane, the first week —

DR. GOODALL:  Yes.  Everybody who goes to see this film in its first week, the Jane Goodall Institute gets a percentage to the ticket sales, and all of that money is going to actually help us look after our little Oscars.  We put a sanctuary with over 150 orphan chimps whose mothers were killed in the bush meat trade.  And it’s very expensive, looking after them, and right now we’re struggling to get the funds to prepare the big island in the middle of the river. Which will make a safe place for the adults, for some of our orphans and our full-grown.  And they’re very smart.  They learn how to escape, and that’s dangerous for them, and it’s very dangerous for our staff.  So it’s a bit desperate.  We need to raise this money.

WOMAN: How did you form this partnership with Disney?

DR. GOODALL:  We’ve been partners with Disney for ages, on and off.  I was — they first brought me into the Animal Kingdom when it opened, because Disney was getting real bad press.  People for the Ethical Treatment of Animals took out a whole page in the Sunday New York Times, which must’ve cost them a fortune, to say, “Disney is killing animals; boycott Disney.”  So the person who was organizing the whole animal part of it, I mean, the closures, and the moves, and that kind of thing, I had known him before, Nick Baranji, and he asked me if I would come and look at it.  And find out what was happening and stand out and speak out for Disney. Which of course I did because a lot of what’s going on here is absolutely first-rate, and so that’s how it all began. 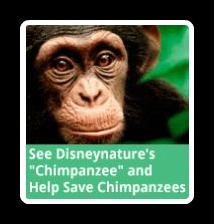 WOMAN: Where did your love for chimpanzees begin?  Where’d it start?

DR. GOODALL:  Well, I wanted to go to Africa when I was ten, and that was because of “Tarzan.”  And don’t think that Tarzan had a chimp called Cheetah.  That’s an invention.  The book doesn’t have Tarzan having a chimp called Cheetah.  He doesn’t have a chimp at all.  And he’s not raised by chimps either, which people have a misconception.  Anyway.  That was when I decided I wanted to go to Africa and live with animals and write books about them.  And then I saved up money, got out to Kenya, met Louis Leakey, and he offered me chimps, so I had no dreams of going to study chimps.

WOMAN:  Do you think that we’re moving in the right direction when it comes to being more aware about our environment?  Or is there still just so much work that —

DR. GOODALL: Well, first of all, I think many people are becoming a lot more aware, that’s for sure.  But the problem is, the awareness isn’t necessarily leading to behavior change.  And so, you know, people — well, most people admit that human activities have caused climate change.  I know there’s a whole movement which is fueled by money in from a certain part of the private sector to say that’s not true, but it is true, and I’ve been to those places, and I know.  And so there’s more awareness.

But the reason I am so passionate about our youth program, Roots and Shoots, is because we have to raise a new generation to understand that, yes, we need money to live, but we wouldn’t live for money.  And we need all of — all of the adults to admit that we haven’t inherited this planet from our parents but borrowed it from our children.  We have to admit that’s wrong.  We’ve been stealing from our children.  We’re still stealing.  We have to get together, if we care about conservation of chimpanzees.

We have to care about conservation of rain forests.  If we want to conserve a rain forest, we have to make sure the people living all around it have better lives than most of them have.  They are mostly living in great poverty, so we work with all of those people.  And then in turn, eventually, they are coming around to help us, to conserve the forests, and the chimps.  So you have to realize, everything is interrelated, and no one organization can do anything alone.

That’s why working with Disney is greet.  Because Disney has a big outreach.  This film, hopefully, will go to millions, eventually, all around the world.  It will raise the profile of chimps.  And hopefully that will JGI to raise more money.  Because if we don’t raise more money, we shall fail in our mission.

DR. GOODALL:  Well, the most important thing — I mean, I could say, please join JGI [Jane Goodall Institute].  And I do say that.  But that’s not the message.  The message is: just spend a little bit of time each day thinking about the consequences of the choices you make.  What you buy.  Where did it come from?  How was it made?  What do you eat?  Does it involve cruelty to animals?  What do you wear that does involve child-slave labor or sweat shops?  How many miles has it traveled?  How was the environment damaged?

And when people start thinking like that, they begin making, first, small changes, and then usually, bigger changes.  And the difficulty is getting people to understand that what you do matters.  That what each one of us does every day is having an impact on the planet, and we have a choice.  What kind of impact do you want to make?  Don’t start thinking, oh, well, it doesn’t matter what I do, ’cause I’m one.  If you were one, it wouldn’t matter two hoots, but you’re not one.

You’re a growing number of people, all around the world, and it’s when everybody starts thinking like this — and children are changing their parents and their grandparents.  So we’re moving in the right direction, but not fast enough.  So, an organization like Disney can help us to spread a message faster and further.

It is hard not wanting to get up and make serious changes to your own life immediately and I hope that is conveyed through her words that day.  Please take two hours out of your week April 20 -26, 2012 and take the family to see CHIMPANZEE!  You can Save Chimpanzees by Seeing Chimpanzee and help the Jane Goodall Institute realize her dream of preserving these amazing animals.

Learn more about the Jane Goodall Institute and Donate to the cause too!

Buy your tickets to See Chimpanzee and a Portion will be donated to the Jane Goodall Institute!

Learn more about the amazing youth program Roots and Shoots! 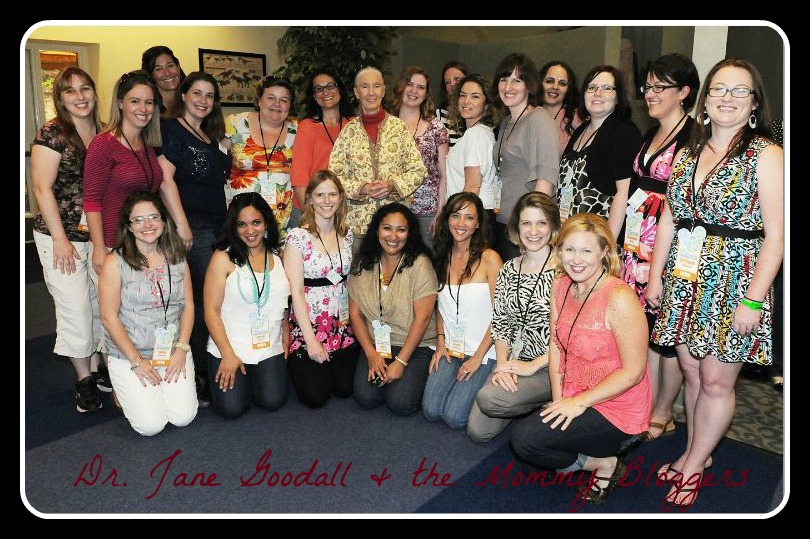 **I traveled with a group of bloggers as a mostly compensated trip for these events.  My writings and opinions are mine.  Please see my Disclosure Page for more information. Affiliate links may be included in this post.**