I am not a very political person.  This is not really a ‘political’ piece. It is more about what is lacking in the process that we use to choose those who make the biggest decisions about our Country and way of life. Generally, I wait until about a week before elections and then do my research and decide then who I think will do the best job in office. I generally mute commercials if I am watching TV so I miss a lot of the ads that would drive me crazy. But with social media, I am now finding myself innundated with the comments, actions and opinions of people who are running for President. I have to say… it has made me decide that I never want my kids to grow up to be President. 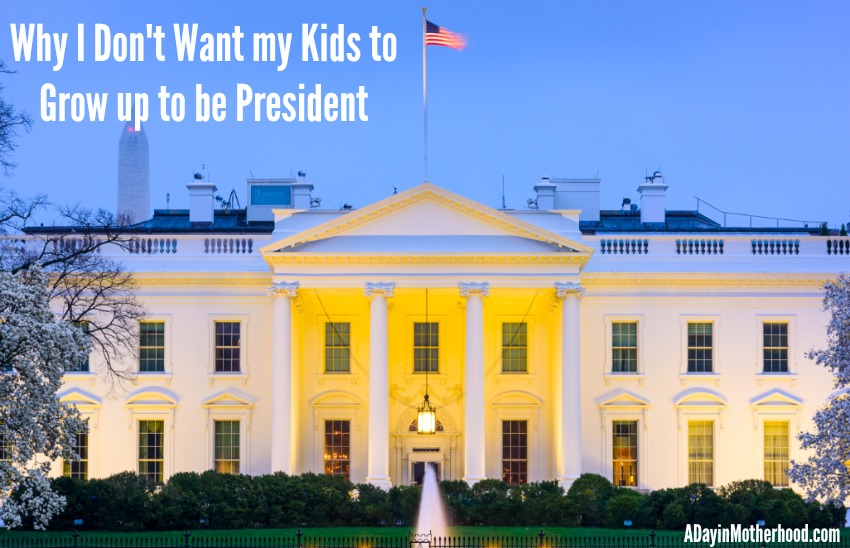 I heard it all the time when I was young! Even an outcast like me could be President of the United States of America! It was a huge deal and the coveted job was seen as the ultimate success. I wanted to be President at some point because I thought that that meant that people finally liked me. Not that I understood the job as a child. Now I understand it and, watching the total mess of political campaigns today embarrasses me. Nothing about these candidates or the ‘vote for me’ messages they are spewing makes me want to click on their name for the highest political office in the land.

The office of the President of the United States used to garner respect. It used to be about electing a person who could make America better. Somehow, over the years, it has become about who can sling the most dirt, raise the most money with lies and who can afford the most press coverage. They no longer seem to need morals, a solid plan or respect for anyone else in their quest to occupy the office.

I understand it is the political season and that the goal is to get attention. I also understand that running for President in social media is fairly new. But I have not heard one policy, one argument, one idea that makes me understand any serious concern I have for this country.

I would never want my kids to exhibit the characteristics of any of the people running for office right now. Though they all have some good qualities that make them likable, the bad and immoral decisions they are making ruins any respect I might have for them.

Forget that the candidates that we have to choose from consist of a career politicians who has made questionable decisions personally and professional in their lifelong appointments in Washington and a loud mouthed billionaire who has no idea what it is like to struggle to put food on the table, pay the light bill or raise kids without a nanny. The displays sexism, racism, separatism and a great lack of understanding the true American journey and what we ‘real’ people go through is lacking in anyone running right now. At least that is how it looks to those of us coming across the soundbite promoted most on social media.  It is ludicrous. It is disgusting and it is embarrassing to anyone who understands right from wrong and takes responsibility for their own actions.

If I were an outsider looking in, I would be laughing at America right now. We no longer have a respectable process to hire people to do their jobs in Washington. We have people who are more concerned with being tops on social media and getting the best late night gig to be effective at all in the White House. I really feel the whole process has been made a mockery this political season.

On the flip side, the candidates that do put their neck out are picked on, ridiculed, dragged through the mud and insulted at every turn. Every comment is dissected and torn apart until the highest rated sound bite can be found. They can barely use the restroom without judgement on the type of toilet paper they use. Who would want their child to be under that kind of constant scrutiny?

I want more for my kids. I want them to be kind, caring, accepting, honest and respectful to those they are working for. It seems that is more and more difficult in the office of President anymore. I would much rather them be the President of their own company doing something they love that benefits their community than being slammed for taking too many vacations by the press every year.

It really has become a convoluted process. Don’t you think?

And I am barely paying attention.