Congratulations to Disney Studios for receiving 17 Oscar nominations!  Including 11 for the amazing film, Lincoln!  See the nominations and quotes from the nominated below! 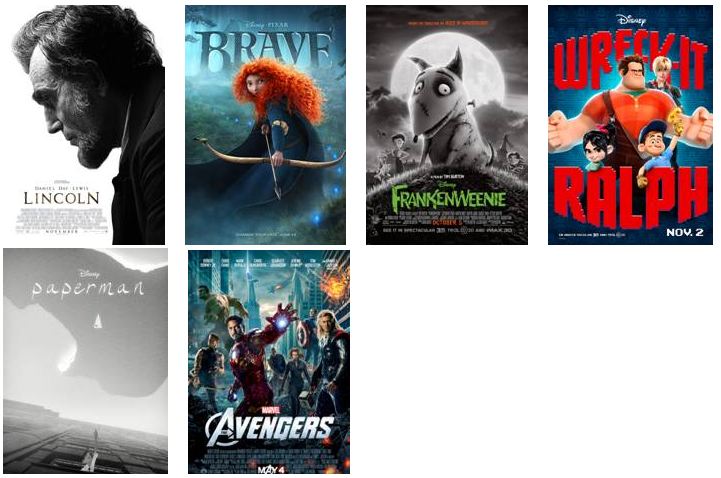 “We are absolutely thrilled and astonished with the 12 nominations. It is such a tribute to the work of those who joined us in this 12-year journey to bring LINCOLN to the screen. We humbly thank the Academy members who honored so many of us.”

“I’m spinning and beyond thrilled on so many levels.  To be included in this amazing group of extraordinary craftsman and exquisite talents has been an honor in itself.  But now for us all  to receive so much recognition from the Academy I’m deeply appreciative and overwhelmed, and basically, I still can’t believe I got the role.”

“I’m tremendously honored to be a nominee in the company of so many writers and filmmakers whose work I admire. I’m very grateful to Steven and Kathy, to Daniel, Sally, Tommy Lee and the whole cast, to Rick, Joanna, Janusz, Mike and John and everyone who made Lincoln happen. I’m overwhelmed by the Academy’s response to the film.  I heard that I’d been nominated while waiting to take off on a plane from JFK to LAX. James Gandolfini, who’s sitting in front of me, gave me a hug and a kiss, so I’m about as happy as can be. ”

“I’m thrilled and honored to be nominated, it was an extraordinary experience with a remarkable team who are all part of this recognition.  It is my first nomination and I’m so happy to be part of this unique body of talent.”

“We are incredibly honored by today’s Academy Award nomination. ‘Brave’ has been an adventure from the beginning – starting with our research trips to Scotland, the crew embarked upon a journey that inspired us all and forever changed our fates. Thanks to the Academy from all of us here at Pixar.”

“’Frankenweenie’ is a very personal film for me.  The idea of telling a feature length version was in the back of my mind for many years.  Stop Motion was the perfect medium for this project, and one I’ve always loved for its expressiveness and dimensionality.  I’ve worked with so many incredible artists: animators, cast members, set builders, and puppet makers, all who have helped bring this film to life one frame at a time.  I’m so honored that the Academy has recognized this film as one of its nominees.”

“To have the ‘Wreck-It Ralph’ team’s passion and years of hard work acknowledged by the Academy is an honor like no other. We are so proud, so grateful – I can’t wait to congratulate everyone in-person.”

“It’s beyond an honor to have ‘Paperman’ nominated for an Oscar. I can’t thank everyone on the team enough for their passion and hard work in making this dream project a reality.”

Be sure to watch The 85th Academy Awards will air live on ABC on Sunday, February 24. Visit Oscar.com for a complete list of the nominations.