The Cast of Jumanji Talks Welcome to the Jungle

The Cast of Jumanji Talks Welcome to the Jungle

**This conversation is brought to you in partnership with Jumanji: Welcome to the Jungle. I attended the press junket. All opinions are my own.** #Jumanji #WelcometotheJunket AD 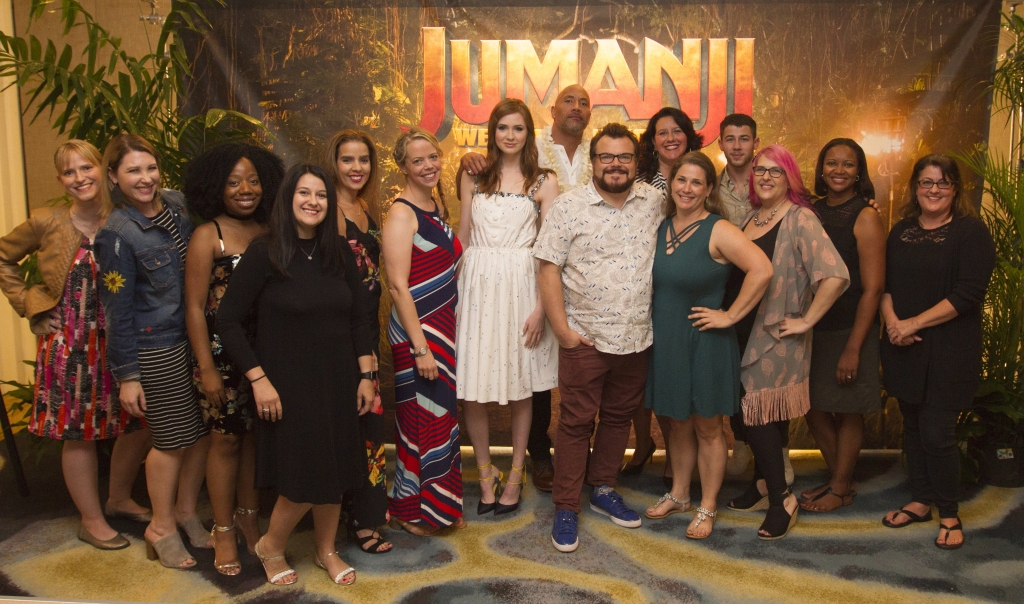 They walked into a room full of bloggers, excited to see the people who starring in the movie that made them laugh the night before while watching Jumanji: Welcome to the Jungle. The movie hits theaters December 20, 2017 and will be a hit. In the meantime, I am always intrigued in what the stars were thinking while making the movie and what they think of the outcome. So, as Dwayne Johnson, Jack Black, Nick Jonas and Karen Gillam walked into the room and posed for photos with us, I thought about how these people, who look larger than life on screen, drank in this experience as it was happening.

Now, I don’t have the actual transcripts, just my notes, so none of this will be verbatim. I was more interested in body language and the attitude in which the actors talked. I find that the canned responses don’t really let you into the actual feelings revolving around the answers anyway. 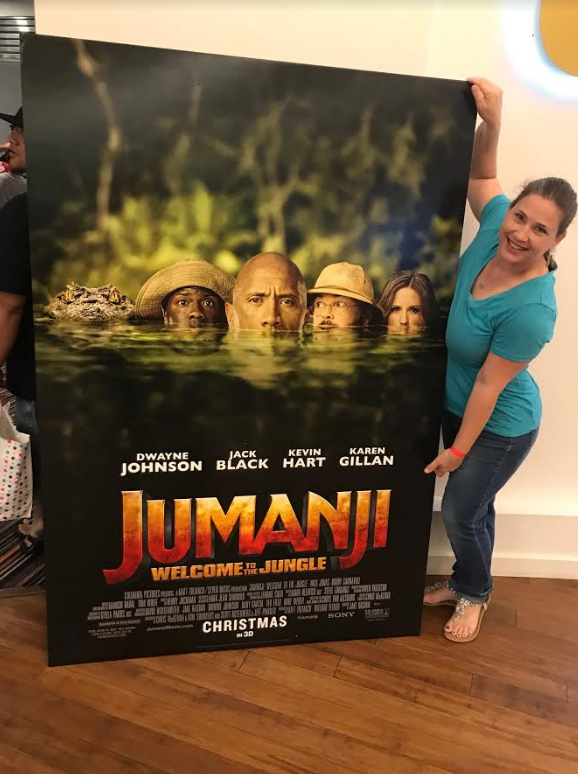 Dayne Johnson: Mr. Johnson is an imposing figure. But, his smile is his true asset. He is a genuine person that truly seemed to enjoy working with his co-actors on making this movie. He talked on detail of his love of Hawaii, where the film was shot, and how glad he was to be back on the island, especially since his family was evicted from the island when he was a child. He was mainly raised in Hawaii and having to leave was tough.

He also shared that his dad helped him in his success by teaching him tough love. He helped him understand that hard work and a dedication to work ethic can lead to success.

One thing I liked about talking to Dwayne Johnson was that he was so complimentary of his co-stars. He talked in length about how well Karen handled some early controversy about her outfit in the film and how Nick Jonas came in a film novice and nailed it. His friendship with Jack Black was evident as he teased him and laughed with him throughout the interview. 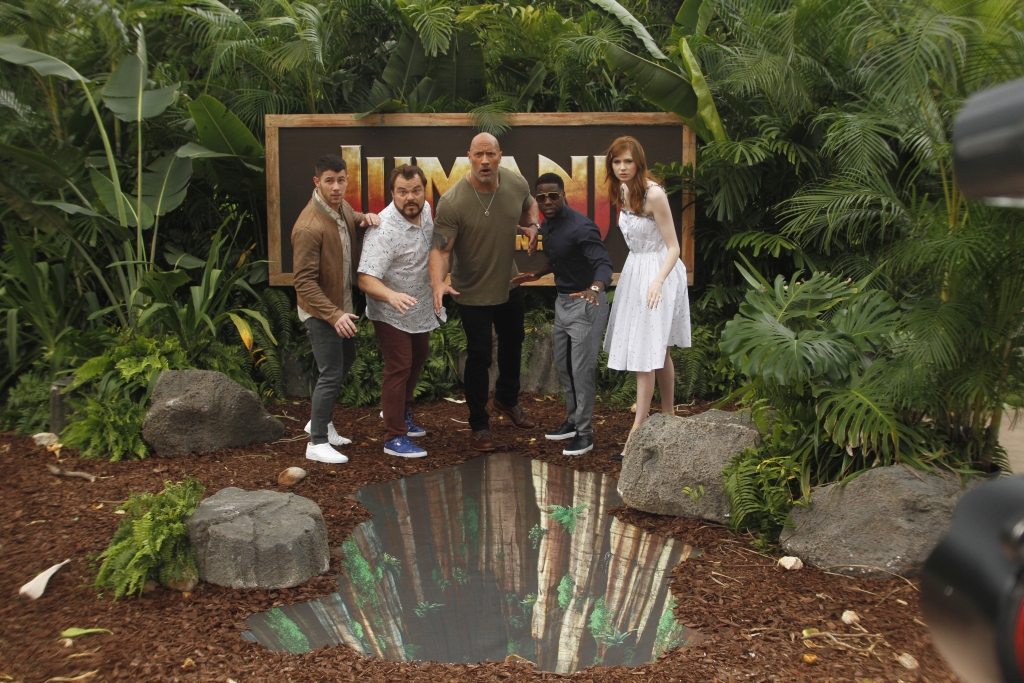 Jack Black: I have never really watched anything that Jack Black has been in until Jumanji: Welcome to the Jungle. He was absolutely hysterical and his talent is evident throughout. Playing the part of a self absorbed high school girl, he nailed the mannerisms and attitude effortlessly. When asked how he researched that, he responded that he just thought of the most popular girl in school when he was growing up and mimicked that!

When asked about that message that he wanted to resonate from the movie, because there are several, he hoped that the movie showed teens that taking a moment to walk in someone else’s shoes can teach compassion. 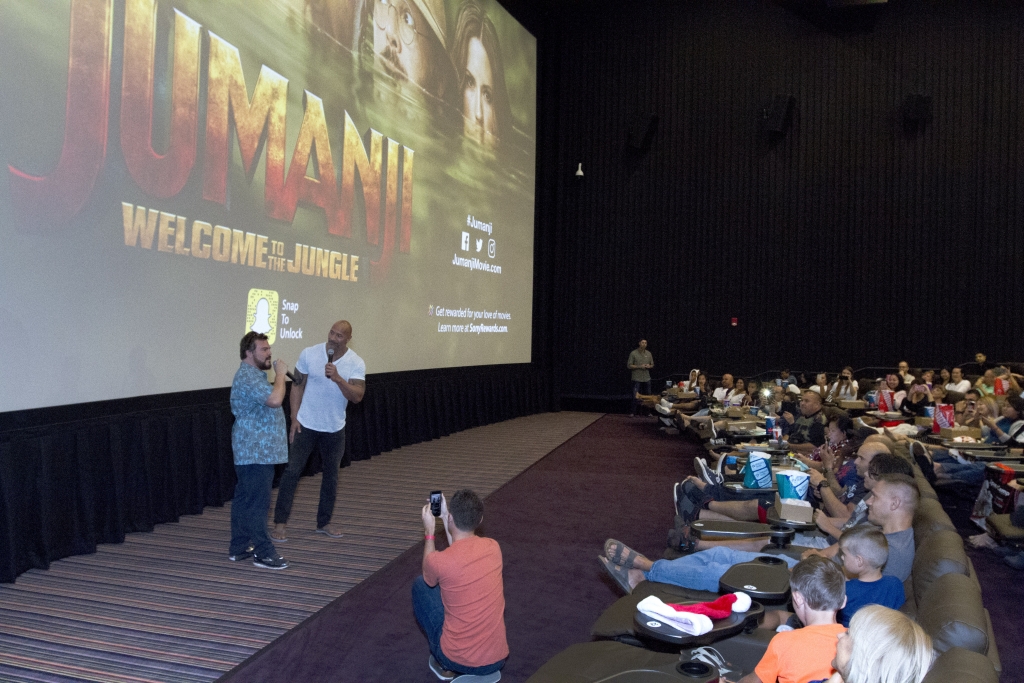 Jack Black and Dwayne Johnson intro the first public screening of JUMANJI: WELCOME TO THE JUNGLE in Hawaii.

Jack Black was an absolute joy and, as you can see in the photo above, we were fast friends!

Nick Jonas: Nick Jonas was the ‘baby’ of the film in that he is fairly new to movie making. In the film, you can not tell at all – he is extremely talented, but he spoke about how his co-workers were so patient and kind on the set to him.

Raised in the ministry, we all know what a great singer Jonas is, but he really shines in this role. As a man who is deeply connected to his family he loved that this movie promotes the message of teamwork. There were no cell phones, no computer and no distractions from the group. So they all learned to work with one another to acheive a common goal. He really liked that aspect of the film’s message! 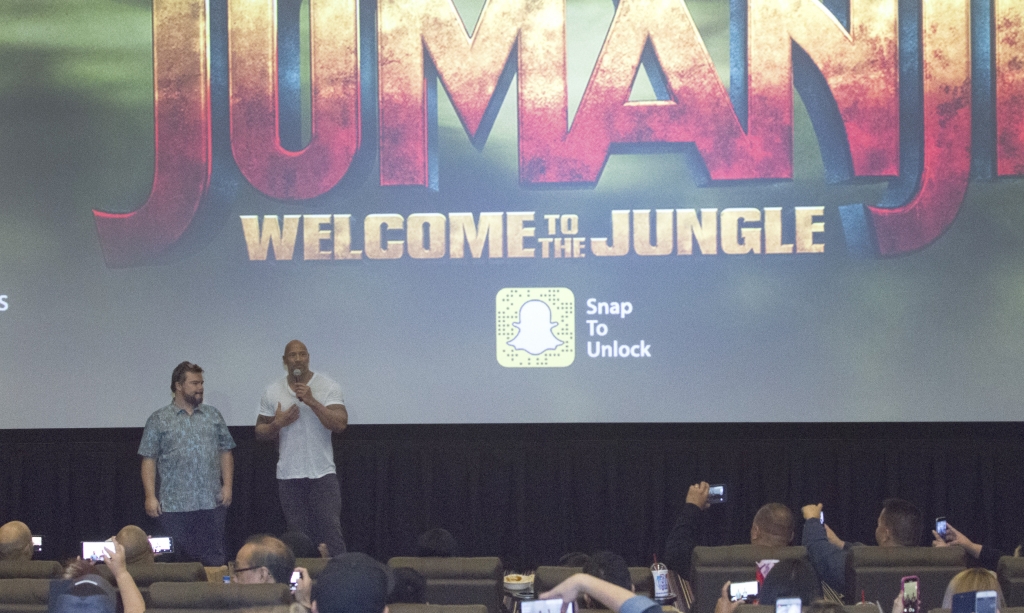 Jack Black and Dwayne Johnson intro the first public screening of JUMANJI: WELCOME TO THE JUNGLE in Hawaii.

Karen Gillan: Ms. Gillan is a beautiful, tall and intelligent woman who nailed the part of Martha and Ruby Roundhouse. Thrilled to have had a mom and dad who supported her dream to act, she happily took on the role of the geeky girl turned bad ass. She loved portraying a girl who was shy and hidden behind her own fears as the one who kicks butt and takes names in the jungle.

As a mom I love the message Jumanji: Welcome to the Jungle is sending. I can’t wait to see it again December 20, 2017!