To the Mom Who Breastfeeds in Public

To the Mom Who Breastfeeds in Public

I am a supporter of mothers who take care of their children. Breastfed, bottle fed, formula fed or any other variation of getting nutrition to your child is fine with me. I breast fed and supplemented with formula for my first child because I worked out of the home. I simply could not pump enough at work to supply her with what she needed. I breastfed my next two as a stay at home mom. Raised extremely conservatively, though, I never breastfed in public unless I was covered. When my dad or another man was in my home, I went to the nursery to feed my kids. I even shied away from doing it in front of my ex-husband but mostly because of the ‘moo’ comments and uneducated remarks. 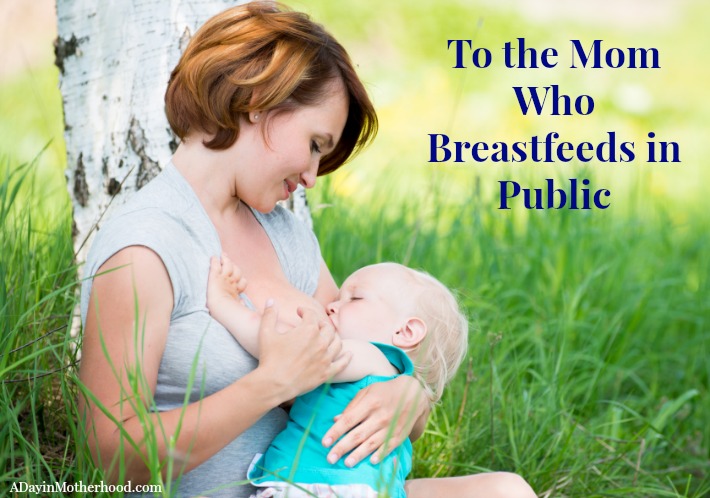 Breastfeeding is natural. It’s human. It is expected.

So why is there even a debate?

I have a dear friend who is a huge advocate of breastfeeding. She has a 15 month old son and still breastfeeds a happy, healthy, growing boy. Anytime, anywhere, uncovered, with no shame what so ever. I absolutely admire her. She does not cover up, does not care who is around and is, literally, just being human.

But when I go somewhere with her and she lifts her shirt to breastfeed her son, I am keenly aware of what the people around her are doing. I have watched the parents with the young kids turn them away and give each other a disgusted look. I have watched the waitstaff do everything in their power not to look down at her. I have watched the teenagers snicker and point. I have watched the older couple whisper and move tables. I watch and I am more disappointed in us as a society than I am shocked that a mother is feeding her child the way nature intended.

When did we become so uptight and ridiculous about breastfeeding?  When did seeing a mother feed her child the way her body is designed to do become something you get dirty looks for? When did a child’s mouth on a breast become fodder for judgement and shame? Why is it cute when a dog or cat feeds their babies off their teets but so ‘private’ when a human mom does it with her baby?

Sure, I understand people who are against public nudity. But this is not nudity. Or disgusting. Or inappropriate. Or the reason a mother should be kicked out of a restaurant, a plane or any other public spot. This is human nature. We seem to be the only society that sees breastfeeding as something that needs to be regulated!

I generally have my kids with me when my friend and I are out. I have never once turned my children away and they have never asked me a question about it. They see that it carries absolutely no shame to it because I have not taught them that there is shame in it. Maybe by the next generation we can lift the veil of shame on public breastfeeding.

I admit, I totally see the side of the people out there who say that they have a right to be offended for any reason by public breastfeeding. I understand that some people are not comfortable with seeing it. I understand people who say that it should be covered so that everyone is comfortable when they go out. But I don’t understand the categorization of it being bad or unacceptable in a society where most of us were breastfed.

I covered up to assuage the embarrassment of ex-husbands and friends and family who clearly disapproved. I covered up to avoid the comments and dirty looks. I  covered up so that everyone else around me was more comfortable being near an act of humanity.

But to my friend who breastfeeds in public, I stand and applaud you. I support you and I will back you with every power I have to make sure that your rights as a mother are more important than a closed-minded, body shaming public who is too near-sighted to see the beauty in what you are doing!

To all of the moms who breastfeed in public proudly, I support you and cheer you on as you work to change the perceptions of a society too laden in the sexual image of a woman’s body to respect the natural use of it!