On July 9th, I kissed my youngest baby girl Good Morning and sang her Happy Birthday.  I warned her to drink up because weaning was upon her.  She bit me in protest, and I let the tears of time traveling too fast trickle down my face.

We had the wonderful party filled with friends and family and again were humbled by the generosity of those we know.   If it were not for them,  I would have no one to complain to.  So my thanks is defiantly heart felt. 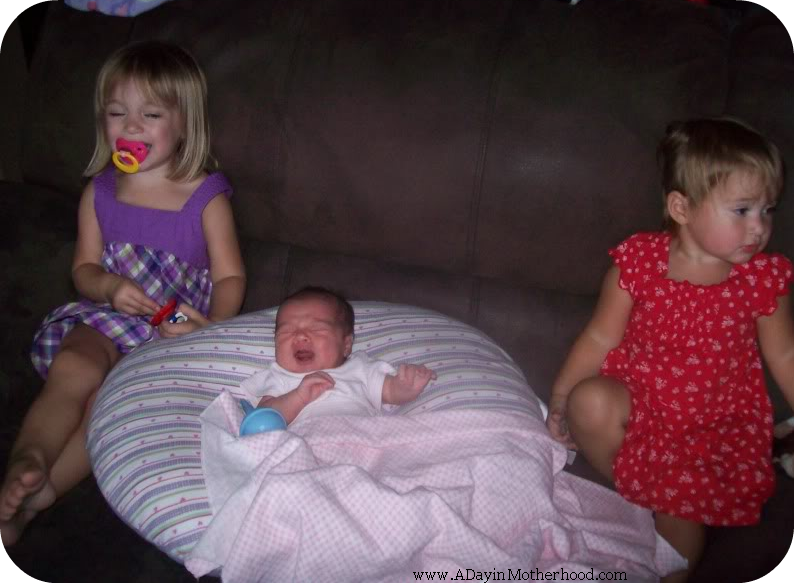 After the party was over and we cleaned up the overflowing toilet in my oldest daughters’ room that flooded two closets, a bathroom, and one quarter of a bedroom…  don’t worry, we are used to dramatic birthday parties, remind me to tell you about Life Flight at Sarah’s first birthday party…  we took a family nap and woke up with a knowledge people should never have to admit to…

We now are the proud owners… or parents for the PC crowd… of a One, Two and Three year old.

Yes, let the ovary clenching begin.  We had 3 kids in 4 years and lived to tell about it!

I had looked forward to this moment since the dollar store test showed a faint line – or seven lines, who is counting?  After dancing around my living room in celebratory naivete, I decided to call my ex-husband.  I was all out of “Let’s surprise Daddy” ideas so at 8:30am, I stunned him for the day.  Literally, he could not speak.  You would think he would have been used to this by now! I peppily told him that, at least one day, we’d be able to freak people out and say “I have a one, two and three year old!”

I don’t think that helped him much.  So I called him several times to ask him if he was ok.  Mostly out of worry that he be freaking out about another child and end up at a bar, never to come home again.

Because he was the one on an alcohol ban for 9 months, you know.  And for that pleasure, he would get nauseous, fat – er and more emotional than usual.  He would have to buy jeans that were too long just because they had a stretchy waist, hang up his platforms for flip flops and stay awake at night with gas and constipation wondering what it would be like to take the Activia challenge and win it.

In true honesty, I can not imagine my life without my Megan.  She is the sweetest baby.  Naps when I want her to, sleeps through the night  – unlike my other two  – and just is an all and all good baby.  The thought of life without her is impossible.

But I will say, the thought of telling people that I have a one, two and three year old, if only for three weeks, is exciting.  I am anticipatory of the reactions and will relish them with pride!  C- section scars rejoice-  we’re about to make people cross their legs in protest!

I got just that chance the other day while at the neighborhood pool.  The sky darkened and, truth be told, I was looking for a reason to leave.  I felt huge for my size 14 bathing suit and I could not remember the last time I shaved…  down there…  so…..

I forecast thunder and lightening to the children  and God helped me out with a few sprinkles.   I gathered up my spice rack of sugar and spice and wrapped them all like burritos lest they run and I not be able to catch them.

While attempting to dry them and instructing them and using my drill Sargent voice, I notice another mother across the way organizing her daughter and trying to steal an obviously abandoned towel.   I do not judge…  times are hard.   She looks at me and I smile and hear “They are soooooo precious!”

Ha!  My chest pump up like I visited a plastic surgeon to have them lifted.

Sit back… wait for it…

Seriously, I thought I was going to have to call a paramedic.  She grabbed her stomach, as if her heart had fallen out of her belly button, and exclaimed “I do NOT know how you do it!  I have an eight year old and she has about killed me!  You have your hands full!”

OK, let’s get one thing out there.  I don’t care how many kids you have – one, three or twenty, parenting is HARD and we ALL have our hands full!

But I will say, honestly, after three pregnancies all ending in c – sections and now 3 little Diva’s who need so much from me that I feel drained from sun up to sun down, it was slightly satisfying to hear someone feel for me!   Even if I do know where babies come from.  And how to stop them – surgery.  And it is all my fault.  So bite me.

Don’t hate me for relishing in the thought that there is pity out there for those of us who are birth control challenged.

I look forward to these three weeks like a twelve year old readying for Christmas.  I will plan family outings solely meant to induce looks of disbelief, judgements of stupidity and arrogance of knowledge and will parade my children like ponies in the Thanksgiving Day Parade.

Because though I would not trade a single one for anything in this world, I will pimp them out for my own entertainment and satisfaction!