Did You Ask Any Good Questions Today?

Did You Ask Any Good Questions Today?

I was watching Master Class on Oprah’s new network, OWN, last night.  The featured guest was Diane Sawyer, a journalist I used to want to be like.  I always thought I would go into Journalism but picked Finance on the advice of a man I was dating at the time.  He said Journalism was too crowded, competitive, and almost never panned out.  I listen to him and to this day, wish I had not. 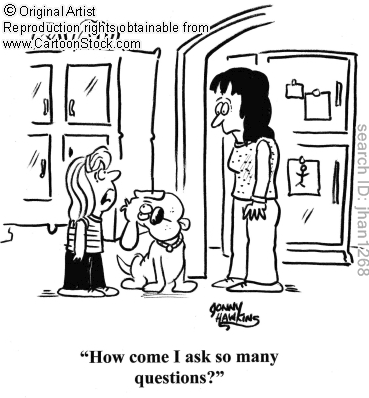 Anyway, we’ll save all of that for a pity post one day!

In the first segment, Ms. Sawyer told of a man who asked his son every day after school “Did you ask any good questions today?”  Just as it impacted her at that time, the story impacted me.  Created an “Aha” moment, if you will. She talked of how this method of parenting kept the boy’s childlike curiosity fresh and active, instead of letting it fade and drift off in a school world where memorization and having the same answers is key to passing.

I thought about her story for a long time.  And I wondered if I encourage my kids to ask questions, or just to answer mine.

Do I create an environment where their curiosity is peaked every single day, with every single instance?  Or am I too busy “doing things” to do more than answer a question they have.  And how often a do I explain things to them and then brush off their questions as “you were not listening” instead of a common curiosity to have it explained differently?

By the time I took an honest insight into how I am helping them to develop their imaginations, I was a little teary eyed.  I know I am not doing the best job. I am too inundated with “No” and “Don’t do that” and “Stop that” to be of any use to their creativity.  And when they do color a picture or build something, I stop after asking what it is. Instead, I should keep going.  Ask them it’s name, or where it lives, or how they came up with the idea.  Have them ask me questions about things they don’t understand.  LISTEN to them.  Really listen.

And answer with more than one word.

Maybe by doing this, and doing it consistently, I will be able to feed their drive, ambition, and desire to learn more about their world, their passions, and their dreams.  Instead of wanting to be something and choosing something else because “your dream is too hard to achieve”.

So, I am making a commitment, just as that father did, to ask my children if they have any questions.  Instead of always telling them that I have all of the answers.  Maybe, in turn, I’ll awaken the curiosity again in me.