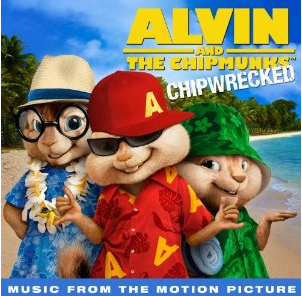 It is coming fast!  The highly anticipated Alvin & The Chipmunks: Chipwrecked movie!  We love Alvin and have both of the previous movies!  So we are really looking forward to the new one!

Chipwrecked hits theaters on December 15, 2011.  But, for those of us needing those hit songs sung in little voices that get the whole family dancing, the Alvin & The Chipmunks: Chipwrecked CD will be released November 15th!

I can’t wait to see the ‘munked versions of classic pop hits and current smashes!

In Alvin and the Chipmunks: Chipwrecked, the vacationing Chipmunks and Chipettes are turning a luxury cruise liner into their personal playground, until they become ‘chipwrecked’ on a remote island.  As the ‘Munks and Chipettes try various schemes to find their way home, they accidentally discover their new turf is not as deserted as it seems.  The film stars Jason Lee, David Cross, Jenny Slate, Justin Long, Matthew Gray Gubler, Jesse McCartney, Amy Poehler, Anna Faris, and Christina Applegate.  Check out the latest trailer at www.munkyourself.com.

Alvin and the Chipmunks: Chipwrecked was directed by Mike Mitchell (Shrek Forever After), and written by Jonathan Aibel & Glenn Berger, based on characters created by Ross Bagdasarian and Janice Karman.  The film was produced by Ross Bagdasarian and Janice Karman; Executive Producers are Karen Rosenfelt, Arnon Milchan, Neil Machlis, and Steve Waterman.

“ALVIN AND THE CHIPMUNKS: CHIPWRECKED – MUSIC FROM THE MOTION PICTURE” (Atlantic)

* Bonus Track Not Featured In Film

You can even pre-order the Alvin & The Chipmunks: Chipwrecked